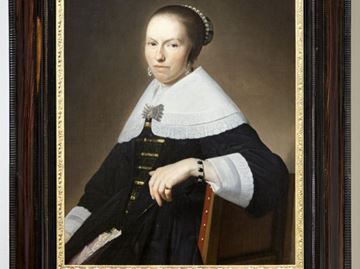 "Portrait of a Lady," a 17th century painting by the Dutch artist Johannes Verspronck, hung in Alma Salomonsohn's bedroom until the Nazis seized it in 1940. Salomonsohn searched for it, as well as other looted family treasures, until her death 21 years later.

Her descendants, now called Solmssen and living in the United States, picked up the search for the heirloom.

That search finally ended at the Art Gallery of Hamilton (AGH), which has claimed "Portrait of a Lady" as part of its collection since purchasing it in 1987 for $58,000, unaware it had been stolen during the Second World War from a prominent German family of Jewish heritage.

In April, after the close of the gallery's centennial exhibition in which the painting is featured, the AGH will return "Portrait of a Lady" to its rightful owners.

"We are grateful to the Art Gallery of Hamilton for its decision," said Sarah Solmssen, granddaughter-in-law of Salomonsohn, in an AGH news release.

"'Portrait of a Lady' hung in Omi's (Alma's) bedroom in Berlin, and we are happy for its return. We are sad only that Omi did not live to see her painting again."

Salomonsohn's husband, Arthur, was a prominent German banker and industrialist who died in 1930, three years before Adolf Hitler came to power and nine years before the start of the Second World War. During his lifetime, Arthur assembled a collection of fine art that included "Portrait of a Lady."

The art was seized by Nazi authorities in 1940 and sold at auction the following year with the proceeds going to the German tax office in Berlin-Brandenburg.

Salomonsohn later immigrated to the United States, changed her name to Solmssen and began the search for her family's looted art. Her grandson, Peter Solmssen, became a prominent corporate lawyer in Philadelphia, eventually serving as general counsel of German engineering giant Siemens AG, a position he left late last year.

The Solmssens retained a law firm based in Berlin that specializes in the restitution of Nazi-confiscated works.

In 2003, that law firm notified the AGH that they believed "Portrait of a Lady" had been stolen. More than 10 years of back-and-forth negotiations followed to prove the painting's provenance until the gallery decided earlier this year that it belonged with the Solmssens.

"We had to make sure the claim was legitimate," said Louise Dompierre, AGH president and CEO. "It always took a very long time between exchanging correspondence. The original lawyer who was handling this died. We thought the claim had been abandoned. When a new lawyer took up the claim it was almost like starting from the beginning."

The AGH bought the painting in 1987 with the help of a private cash donation at a Sotheby's sale dubbed Important Old Master Paintings in New York City.

The historical provenance of "Portrait of a Lady" was incomplete at purchase, said Dompierre, adding that was not unusual for an artwork more than 400 years old. As well, Dompierre said there was less awareness at the time of missing Nazi plunder.

A major international push to recover thousands of missing pieces of Nazi-looted art lost before and during the war did not come about until 1998, when a conference in Washington, D.C., drew up the "principles on Nazi-confiscated art," to which Canada is a signatory.

"It was a legitimate purchase with the information available the time, done in good faith," said Dompierre, who is stepping down from her position at the AGH later this month after 15 years at its helm.

Earlier this year, after accumulating as much evidence as possible and consulting with experts in the United States and Canada, the decision was made to return the painting to the Solmssens.

Last month, Sarah and Peter Solmssen came to Hamilton to view the painting.

"They were absolutely delighted," Dompierre said. "They had been involved in the search for this painting for many years."

Dompierre said there appeared to be no hard feelings.

"When we told them the work was part of an exhibition for the gallery's centennial, they volunteered to leave the work with us until the end of the exhibition in April," she said. "We didn't even ask them. It came spontaneously."

Dompierre said the Solmssens intend to keep "Portrait of a Lady" in the family.

They even have a place to put it.

"I think they have the exact location where the painting will be hung in their house," she said.