The last of the Monuments Men receives recognition 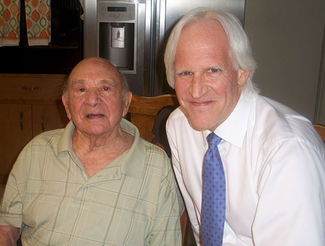 Last August, the Heritage reported about the sixth surviving member of the Monuments, Fine Arts and Archives program, better known as the Monuments Men, Rouben Sami, who lives in Winter Park. The same day the article ran in the paper, Aug. 15, Sami turned 93. His family hoped he would live to see the day when his name would be officially added to the list of recipients of the Congressional Gold Medal-Congress' highest civilian honor in recognition of distinguished achievements and contributions.

Sami was deputy director of the Offenbach Archival Depot under the directorship of Capt. Isaac Bencowitz, who chronicled the work done at OAD in albums, complete with photographs and descriptions of the items-books, Torah scrolls and other artifacts-cataloged, restored and returned to the rightful countries from where they were stolen by the Nazis. Bencowitz gave the albums to Sami. One was lost in a fire, but Sami still had the remaining album.

After Sami was interviewed last summer, the Heritage contacted the Monuments Men Foundation for the Preservation of Art to inform them that Rouben Sami was alive and well. After some research, Elizabeth Hudson, coordinator of historical research, acknowledged that Sami would be added to the list and that Robert Edsel, author of "The Monuments Men: Allied Heroes, Nazi Thieves and the Greatest Treasure Hunt in History"-which the movie of the same name was loosely based-and founder of the Foundation, would visit with the Samis, as he has visited with all the other living men and women of the Monuments Men. There were 19 living when he began this work 12 years ago.

That visit happened Tuesday, Oct. 21, at the Sami's home. Edsel spent a little more than an hour with Rouben, his wife Lee, daughter Renae and son Stephen engaged in conversation about Rouben's experiences at the OAD, the people he worked with, and the incredible work that was completed there.

"I was proud to be a part of doing what I was doing because of being Jewish," Sami told Edsel. "I wasn't any commander or someone important but I did the best I could. I was only 20 years old. I wanted to get home, so maybe I could have done more, but I was young."

As Edsel shared photographs from his first book "Rescuing Da Vinci" (a 4.5 lb. book he took with him on all his visits to the men and women of the Monuments Men), Sami remembered more things, more people, and experienced more feelings.

Proud that he is a Jew and lived in Israel before the war, Sami continued, "I loved the job because I was helping my own people."

Edsel presented to Sami a Gold Leaf Certificate of the 2007 Congressional Resolution-a proclamation recognizing the work done by the 350 Monuments Men. In 2015, a single Congressional Gold Medal will be presented collectively at a ceremony at the U.S Capitol Visitor Center in honor of all the Monuments Men. A few of the other recipients have included Shimon Peres, the victims of 9/11, Navajo and Native American Code Talkers, and Raoul Wallenberg.

The passage of this Resolution in 2007 and the 2014 signing by Pres. Obama of the Monuments Men Recognition Act awarding the men and women with the Congressional Gold Medal has been a 12-year undertaking by Edsel, who began this work by simply asking the question "How is it that all these works of art were not destroyed in the war?" No one had an answer that could satisfy him, so he began to search for answers and discovered this small group of 350 men and women known as the Monuments Men. The result of his hard work was the book "Rescuing Da Vinci," a detailed, 460-photograph pictorial account of their work, which he took with him to each and every congressman and congresswoman to garner the two-thirds support from both Houses needed to get the recognition these people deserved.

When Edsel began his journey to visit all the surviving Monuments Men, he carried with him 10 editions of this book and had each survivor sign them. He was down to 4 editions when he visited with the Samis-having given signed copies to dignitaries (including Pres. G.W. Bush) and organizations such as the National War Museum-and Sami added his signature to those last four books.

And what of the album? Edsel will donate it to the National World War II Museum's exhibit on the Monuments Men, scheduled to break ground in late 2015. It will be in the Liberation Pavilion of the museum, which is located in New Orleans.

Last Monday, Oct. 28, Edsel attended a ceremony at the National Archives in Washington, D.C., to receive the Foundation for the National Archives' 2014 Records of Achievement Award, in recognition of his work, bringing to life the storied history of the men and women who served in the Monuments, Fine Arts and Archives section of the Western Allies during World War II.

"Robert Edsel has rescued from history not only priceless looted art albums, but the equally priceless stories of the brave men and women who risked their lives to save artistic and cultural treasures," said David S. Ferriero, Archivist of the United States.

And so too, Rouben Sami has helped rescue and return millions of priceless books and works of art, as well as preserving a priceless album that will be placed in its permanent home. For all this, Sami has finally received the proper recognition he so rightly deserved.