The man who saved Monet from Hitler

A new documentary looks at how Hildebrand Gurlitt, a Nazi-approved art dealer, smuggled degenerate works out of sight of the Fuhrer 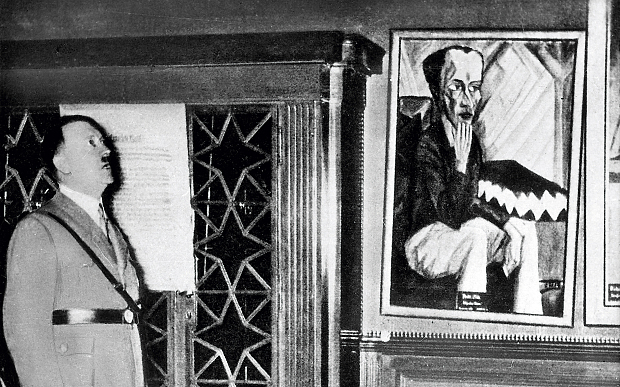 One of the art world’s great 20th-century mysteries was exploded in 2010 by a routine spot-check on a German train. As he arrived from Zurich, Cornelius Gurlitt, an unemployed 77-year-old pensioner with no visible means of support, was discovered by customs agents to be carrying €9,000 in cash: not an illegal sum, but enough to arouse suspicions of tax evasion. When the police entered his home in Munich two years later as part of their investigation, they found the workaday rented flat packed with some 1,500 works of art, including pieces by Dürer, Renoir, and Picasso. Many of the pieces in this collection, whose value approached a billion euros, had been missing since the Second World War.

In The Art that Hitler Hated, the first in a new series of the Imagine documentary strand, Alan Yentob plunges into the history of this titanic haul, discovering, as he puts it, “a story of complicity, cover-up and denial” that stretches back to the heart of the Nazi regime. The collection in the Munich flat was assembled in the Thirties by Cornelius Gurlitt’s father Hildebrand, a museum director who became one of the Reich’s few sanctioned dealers of so-called “degenerate” modern art, buying paintings from fleeing Jewish collectors and selling them abroad to raise money for work that the Nazis approved. “But he was a quarter Jewish himself,” says the programme’s director Jill Nicholls, “and he was an enthusiast for the so-called degenerate art. Modern art, Impressionism, that was what he loved.”

Interrogated at the end of the war, Gurlitt managed to convince his American captors that most of his vast collection had been destroyed in the firebombing of Dresden; instead, it passed, after his death, to his son. “And Cornelius seems to have felt,” says Nicholls, “that it was his job to guard the treasure. He was found to have a Monet in a suitcase under his hospital bed.”

The question of Entartete Kunst – so-called degenerate art – was a peculiarly pressing one to the Nazi regime. For Hitler and his acolytes, art had three main strands: it should be comprehensible, it should be inspiring and heroic, and it should express the Nazi racial ideal of a Northern European Volk untainted by what they considered “Jewish influence”. A failed painter himself, Hitler was remorseless in his hounding of the art that he thought contrary to the principles of the state. “Works of art which cannot be comprehended,” he announced, opening a gallery dedicated to Nazi art in 1937, “will no longer be foisted on the German people.”

As Nicholls points out, even his closest allies underestimated how seriously Hitler took the question of artistic taste. “The way Goebbels changed his mind was new to me,” she says. “Originally there was a rightwing student movement that wanted Expressionist art to be the art of the new Germany, and Goebbels was keen on that. But because Hitler so much preferred pseudo-classical and pseudo-Romantic art, Goebbels did a quick U-turn and became the head of the campaign against degenerate art.”

Goebbels, however, soon threw himself into the cause. In 1937, the infamous Degenerate Art show in Munich exhibited 650 modern works, confiscated from German museums.

This unambiguous declaration of intent placed further pressure on Jewish collectors and artists who sensed the way the wind was blowing. They already faced heavy “emigration taxes” if they wanted to leave the country, which meant that many had resorted to selling their collections to people like Gurlitt; after 1938, it became illegal for Jews to buy or sell art, which meant that many collections were either confiscated outright or bought at derisory prices from fleeing emigrants.

This is the second strand of Nicholls’s documentary, which explores the fallout from the collection’s discovery among the descendants of its original owners. Yentob interviews David Toren, an elderly emigré now living in America, who remembers sitting in front of one of the paintings, Max Liebermann’s Two Riders on a Beach, when he was a child at the house of his great-uncle. Toren escaped Germany on one of the Kindertransport trains, but his uncle died shortly afterwards and his parents were gassed in Auschwitz; he is now pressing for the return of paintings from the collection.

Like those of others interviewed for the programme, however, Toren’s claims depend on whether it can be proved that his forbears sold their paintings under duress, and this question is now at the centre of the debate over the collection’s future. Cornelius Gurlitt died in May this year, and under the terms of his will the paintings are supposed to pass to the Kunstmuseum Bern; it has yet to comment on whether it will take what Nicholls calls “the poisoned chalice”. But this uncertain state of affairs offers little comfort to Toren and the others in his position. “He feels so strongly,” says Nicholls, “that he might die before he gets anything back.”

Imagine: The Art That Hitler Hated begins on BBC One on Tuesday October 28 at 10.35pm