Sotheby's and Christie's Split on Response to Nazi Victim's Art 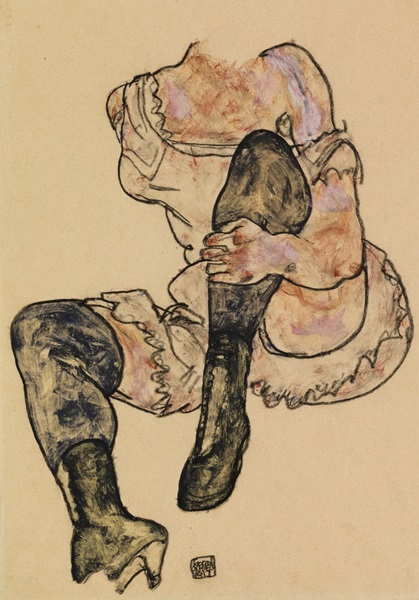 Christie's and Sotheby's respective handling of two Egon Schiele artworks once owned by Fritz Grünbaum, a German cabaret performer who died in Daschau in 1941, are "striking" and "notable" according to a story in the New York Times by Patricia Cohen and Graham Bowley.

Next month, on November 5, Christie's is auctioning a 1910 Schiele watercolor Town on the Blue River, and, in conjunction with a restitution agreement that views the work as looted art, will provide compensation to Grünbaum's heirs. Sotheby's, which is offering a 1917 goauche and crayon on paper, Seated Woman With Bent Left Leg a day earlier, will not compensate the heirs.

According to the story: "The tale of these two works with a shared history illustrates how, even 70 years after the war, experts in the international art market can disagree substantively about how to handle the sale of works once owned by Jews in Europe during the Nazi era."

Since both works were indisputably owned by Grünbaum, it seems as though they should be treated similarly on the market today. But after Grünbaum was arrested and sent to the camp where he died, what happened to the works has been vociferously debated, including whether or not his sister-in-law Mathilde Lukacs-Herzl came to possess and later sell either or both of these works, as part of a larger group, to Swiss dealers. The fact that the work being offered at Sotheby's had been the subject of an eight-year court battle that ended in favor of its current owner means that far more detail has emerged about the provenance of that work, in contrast to the Christie's consignment, in the decades since World War II. 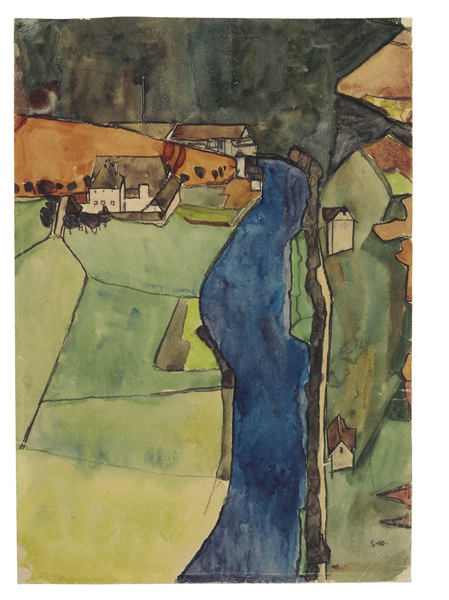 The complexities, which one specialist calls "restitution roulette," can "become particularly acute in cases like Grünbaum's, where there are conflicting accounts, large gaps in the records, and differing notions of what constitutes a just resolution" according to the story.

Perhaps the most important distinction here is that Seated Woman, was the subject of a protracted legal battle after David Bakalar, who purchased it in 1963 for $4,300, was forced to withdraw it from a planned 2005 Sotheby's London sale. Town on the Blue River, which was acquired by Ilona Gerstel in 1965 according to the story, and is being offered from her estate, was not.

According to an October 2012 ruling from the U.S. Court of Appeals, Second Circuit, New York,  the "District Court found that the Drawing [Seated Woman] was not looted by the Nazis. Vavra and Fischer [the claimants] argue that the District Court's finding is clearly erroneous and that the Nazis stole the drawing. However, Bakalar traced the provenance back to Mathilde Lukacs [sic], Grünbaum's sister-in-law, who sold it to a gallery in 1956. Vavra and Fischer's hypothesis—that the Nazis stole the drawing from Grünbaum only to subsequently return or sell it to his Jewish sister-in-law—does not come close to showing that the District Court's finding was clearly erroneous."

Indeed, the listed provenance of the works in the catalogues is different regarding the ownership immediately after Grünbaum. Sotheby's catalogue lists "Fritz Grünbaum, Vienna (by 1938)" followed immediately by "Mathilde Lukcas-Herzl (sister-in-law of the above)." Christie's catalogue for the Schiele it is selling reads: "Fritz Grünbaum, Vienna" followed by "Schenker & Co., Vienna (1938)" a moving and shipping company.

The story says that for years following the 2005 withdrawal both houses "steered clear of works once owned by Grünbaum out of  concern any sale might be challenged," and that they now "say they make decisions case by case."

In light of this, we asked Christie's whether a court ruling would affect the house's decision to agree to compensate claimants. Christie's said Monica Dugot, international director of restitution at Christie's, was not immediately available for comment.