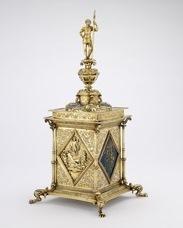 Oxford University is to return a Nazi-looted antique which had been part of a £10 million collection.

Jewish heirs have successfully claimed the 16th-Century silver-gilt salt cellar which was taken as part of a forced sale by the Nazis in Berlin in 1937.

It originally belonged to Hamburg Jewish collector Emma Budge, whose large collection was ordered to be sold.

Her heirs were sent to Buchenwald concentration camp and forced to transfer Swiss bank accounts to the German authorities.

The claim was the result of research by experts at Oxford's Ashmolean Museum of Art and Archaeology, who identified the piece as looted and informed the Budge family.

The Museum had been bequeathed the piece only last year as part of an extraordinary £10m collection by the collector Michael Wellby.

The museum said it would return the object after a ruling by the government's Spoliation Advisory Panel.

In June the British Library and London's Victoria and Albert Museum were asked to return an estimated £200,000 of Nazi stolen art after fresh claims by Jewish heirs.