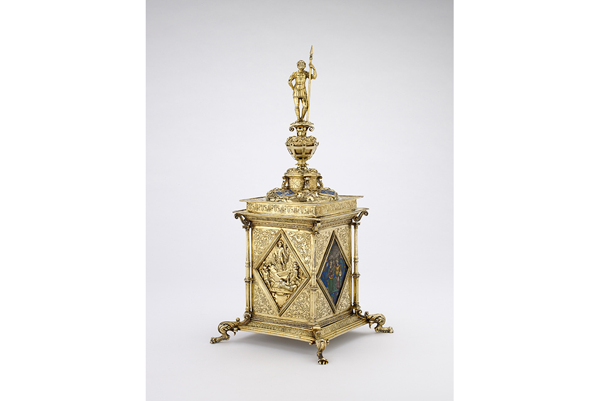 A Renaissance silver-gilt and enamel salt cellar, bequeathed by collector Michael Wellby to the Ashmolean Museum in Oxford, has been identified as Nazi loot. It will thus be returned to the descendants of its pre-WWII owner.

The intricate piece is one of the 500 silverware items—believed to be worth in excess of £10 million—donated to the museum in 2012 by Wellby, a former friend of Professor Timothy Wilson, the museum’s Keeper of Western Art.

When concerns about the provenance of some of these objects started to emerge, Wilson said he believed that Michael Wellby’s father, who purchased the piece, “Would not have knowingly acquired any object which he had reason to believe had been looted from or sold under duress by a Jewish family in the period of Nazi rule.”

But this didn’t prevent Wilson from starting extensive research on the collection’s history. It emerged that the salt cellar once belonged to the Jewish collector Emma Budge of Hamburg. Together with her husband Henry—who had made his fortune financing American railroads—she gathered an extraordinary collection for their lavish “Budge Palais.”

After her husband died in 1928, Mrs. Budge toyed with the idea of donating their art collection to Hamburg’s Museum für Kunst und Gewerbe, but eventually decided against it when Hitler came to power in 1933. When she died in 1937, everything was sold via the now-defunct, Berlin-based auction house Paul Graupe, which has become infamous for selling artworks sized from Jewish families.

According to a report published on Art Daily today, the Spoliation Advisory Panel has ruled that the sale “was a direct result of anti-Semitic intervention by the Nazi authorities” and thus recommended its restitution.

This is another victory for the Budge family, which as Robert Bevan wrote in Bonhams Magazine, has already been successful in recovering works from major institution including Münchner Stadtmuseum, the Staatliches Museum Schwerin, the Columbus Museum of Art in Ohio, and the V&A in London. Five of the pieces recovered swiftly hit the auction block (see “Nazi-Looted Porcelain Returned by V&A Museum Now Up for Auction”). So, the salt cellar might not stay in the family for very long.