The Wiesbaden Museum was once a collection house for art stolen from Jewish owners by the Nazi. With one painting, they hope to right at least one wrong while bringing awareness to its ongoing restitution work. 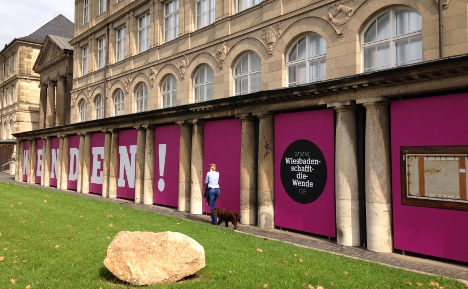 The Wiesbaden Museum in Hessen.

On the second floor of the Wiesbaden Museum in Hessen hangs a piece of art from Hans von Marées but it can't be seen. The painting called "The Refreshment" has been hung to face the wall as part of a public donation campaign to buy the painting for a fair price from its last legal owner.

In 1934, Max Silberberg, a Jewish industrialist in Breslau, was forced to sell the painting to the local Nazi regime, after which it landed in Wiesbaden. Silberberg and his wife were both murdered in Auschwitz.

"The painting has been in storage and has not been seen since the 1980s," a spokesperson for the Wiesbaden Museum told The Local on Monday, adding that it will remain unseen when or if the museum can raise the money to buy it.

"We agreed on a price, but it doesn't yet belong to us, and so we won't show it until it legally does," the spokesperson added.

The refreshment ad its currently on display in the Wiesbaden museum.

"The Refreshment" is in the middle of the museum's permanent collection and the only painting in the "Wiesbaden creates the Turn" campaign in which €93,000 has to be raised. That amount covers the cost of the campaign and a third of the buying price. The rest will be paid out by the "Friends of Museum Weisbaden" organisation and the culture ministries from the state.

"We want to right not only the image, but also a wrong," said Thilo von Debschnitz of the creative agency Q who came up with the concept of the exhibition. The idea behind the campaign was not just to acquire the painting for the Wiesbaden Museum, but also to highlight the work being done by art institutions to correct some of the wrongs done by the Nazi regime.

Wiesbaden Museum was once headed by Herman Voss, who was given the duty by Adolf Hitler to collect artworks for the planned Führermuseum in Linz.

Two other paintings have been returned to or bought from rightful heirs out of the gallery's archives.