USB accused of using family name to establish 'sham' foundation, rather than looking for surviving relatives. 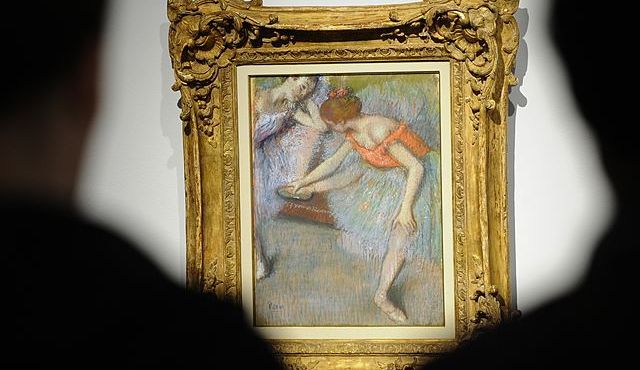 Edgar Degas' 'Danseuses', which was auctioned in 2009. Photo by AFP

Heirs of a German-Jewish couple whose vast art collection was confiscated by the Nazis have filed lawsuits against a Swiss bank they accuse of cheating them out of their inheritance.

The lawsuits were filed recently in New York and Switzerland against global banking giant UBS and a foundation it controls, the New York Times reported on Friday.

According to the relatives of Ludwig and Margret Kainer, the bank claimed to be acting on behalf of the couple's heirs, but instead channeled proceeds from art sales and German reparations to a foundation created by Swiss bank officials.

One example cited is the 2009 auction of Edgar Degas’ “Danseuses,” which the Christie's catalog specified was being sold as part of a restitution agreement with the “heirs of Ludwig and Margret Kainer.” The masterpiece sold for nearly $11 million in 2009.

However, the relatives of the Kainers maintain that not only did they fail to benefit from that sale, they were never even told about it – nor about any other auctions of works once owned by the couple, including pieces by Monet and Renoir.

The relatives reportedly contend in their lawsuits that the bank never made a diligent effort to find them, instead using the family name to create a “sham” foundation which was ostensibly organized to support the health and education of Jewish youth but actually formed, they say, to cheat them out of their inheritance.

Both the foundation - named after Norbert Levy, Mrs. Kainer’s father - and UBS have said in court papers that they have done nothing wrong, but declined to comment, said the Times.

UBS, the result of a 1998 merger between Swiss Bank Corporation and the Union Bank of Switzerland, was one of several Swiss banks accused of trying to block attempts by Jewish war survivors and heirs to reclaim assets deposited in what they had thought were safe havens.