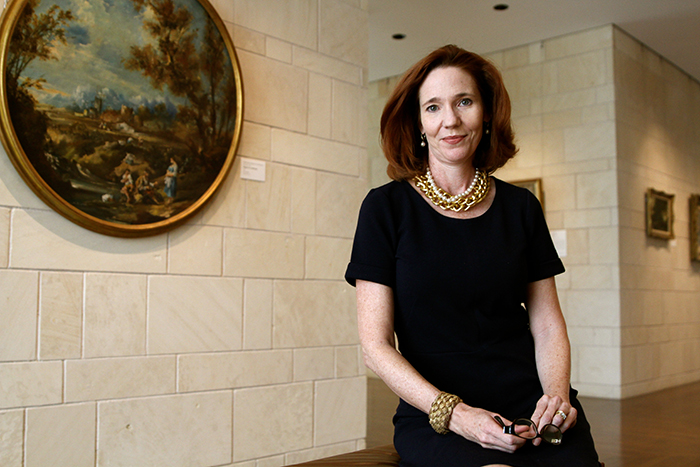 Emily Neff poses in the European art wing of the Fred Jones, Jr. Museum of Art. She is the director and chief curator of the museum. One of Neff's goals for the museum is to be continually improving.

Neff came to OU for the position in January 2014 after working as the founding curator of American painting and sculpture at the Museum of Fine Arts in Houston, where she had worked as curator since 1997.

Wallace said that Neff resigned “to pursue other career opportunities.”

Her resignation comes the day after Oklahoma Representative Mike Reynolds released a statement asking the university to clarify its position regarding the painting, according to a KFOR report.

OU President David Boren stated that her resignation is not related to the Weitzenhoffer Pissarro painting that was the subject of recent controversy.

When the university announced Neff's appointment, President Boren said the university was "extremely fortunate" that she had agreed to be the museum's director, according to a Nov. 2013 release on OU's Public Affairs website.

Neff is an alumnus of Yale Univeristy, Rice University and the University of Texas at Austin.
Mark White, who has worked as a curator at the Fred Jones Jr. Museum of Art for 15 years, has been appointed as interim director pending approval from the Oklahoma Board of Regents, Wallace said.
White also worked as the interim director after the resignation of Ghislain d'Humieres, the museum's director before Neff.