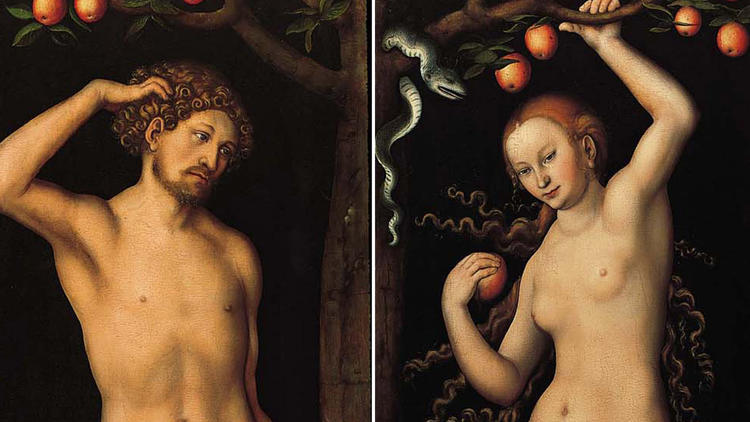 Detail of 'Adam' and 'Eve' paired paintings by Lucas Cranach the Elder now owned by the Norton Simon Museum.

The U.S. Supreme Court may be the next stop in a long and winding lawsuit over whether the Norton Simon Museum is obligated to give up a pair of Renaissance paintings that have been among its most prized holdings since the 1970s.

In 1940, 31 years before the Pasadena museum's namesake founder bought them, Lucas Cranach the Elder's "Adam" and "Eve" paintings were stolen by the Nazis from Jacques Goudstikker, a prominent Jewish art dealer in the Netherlands.

Goudstikker's daughter-in-law, Marei Von Saher, has been fighting in court since 2007 to force the nearly 500-year-old paintings' return.

Von Saher, who lives in Connecticut, won the most recent round -- a 2-1 decision in June by a three-judge panel of the U.S. 9th Circuit Court of Appeals that resurrected her case after it had been dismissed by a judge in U.S. District Court in Los Angeles.

Court documents filed recently by attorneys for the Norton Simon say that “the museum is weighing and expects to file” a petition asking the Supreme Court to review the 9th Circuit's decision.

A Supreme Court ruling in the museum's favor would end the fight and keep "Adam" and "Eve" in Pasadena. But the Supreme Court agrees to consider only a small fraction of the petitions it receives.

Museum spokeswoman Leslie Denk said Wednesday that Norton Simon officials hadn't yet decided whether to appeal to the Supreme Court. The filing deadline would be in mid-November.

The alternative is returning to the trial court in Los Angeles, where there's at least one more potential legal roadblock Von Saher must overcome before her case could qualify for a trial.

The overarching issue in the case for the last few years has been whether Von Saher's claim can even be heard in an American court because of the legal implications of a chain of events starting in 1945, when U.S. forces in Germany recovered "Adam" and "Eve" from the art stash of Hermann Goering, one of Adolf Hitler's top henchmen.

Under U.S. policy, artworks looted by the Nazis and recovered by American forces were sent back to the countries from which they had been stolen. It was left to each nation's postwar government to provide a forum in which Holocaust victims or their heirs could file claims, followed by official proceedings to determine whether the claims were valid.

A key question now is whether the Dutch government's dealings in the 1950s with Desi Goudstikker, the art dealer's widow, satisfied the requirements of the U.S. art restitution policy.

In 2011, in an earlier phase of the case, acting U.S. Solicitor General Neal Kumar Katyal had filed a brief saying that the Dutch government's handling of "Adam" and "Eve" after the war had been "bona fide," and that the process had fulfilled the requirements of postwar U.S. foreign policy and must now be respected by U.S. courts.

John Walter, a U.S. District Court judge in Los Angeles, dismissed Von Saher's suit in 2012, relying heavily on Katyal's assertion that the Dutch proceedings had complied with U.S. foreign policy. Walter ruled that Von Saher's suit was an unconstitutional intrusion on the federal government's authority to carry out foreign policy and not have it second-guessed by the courts.

But Dorothy Nelson and Harry Pregerson, two of the three 9th Circuit judges who heard Von Saher's appeal, were openly critical of the solicitor general's finding that the 1950s Dutch proceedings were "bona fide." They said the solicitor general had made an incorrect assessment of the facts and reached the wrong conclusion.

Desi Goudstikker had in fact refused to file a claim for "Adam" and "Eve" after the war because she was convinced that the Dutch restitution process was stacked against Jews and patently unfair (her husband had died in 1940.)

Nelson and Pregerson ruled that her decision not to file a claim had been justified; they cited an early 2000s finding by a Dutch government commission that the Netherlands' postwar restitution proceedings on Jewish claims had been “legalistic, bureaucratic, cold and often even callous.”

Nelson and Pregerson said that Desi Goudstikker's refusal to take part in "sham restitution proceedings" meant that the U.S. postwar art restitution policy was never carried out in the case of "Adam" and "Eve" -- and therefore Von Saher's suit can go forward without any danger of it second-guessing an outcome of U.S. foreign policy.

The Dutch government held on to Adam and Eve until 1966, when it sold the paintings to an heir of Russian aristocrats who said the Bolsheviks had stolen them from his family during the Russian Revolution.

Museum founder Norton Simon bought “Adam" and "Eve” from the Russian American heir in 1971. The sides in Von Saher vs. Norton Simon Museum disagree as to whether the paintings ever belonged to the aristocratic Stroganoff family. Jacques Goudstikker bought "Adam" and "Eve" in 1931 at a Soviet-sponsored auction in Berlin.

The crux of an appeal to the Supreme Court, as outlined in the Norton Simon's recent court filings, would be that, whether postwar Dutch proceedings over looted art were fair or not, the 9th Circuit judges had no authority to second-guess the solicitor general's finding that they had satisfied the requirements of U.S. foreign policy.

The museum cited the dissenting 9th Circuit panelist, Kim McLane Wardlaw, who said in her minority opinion that the solicitor general speaks authoritatively for the federal government, and courts have no right to contradict the solicitor general's legal assertions about what constitutes U.S. foreign policy.

The solicitor general had made a “clear determination that the Goudstikkers had an adequate opportunity to assert their claim after the war,” even if they chose not to, Wardlaw wrote.

If an appeal to the U.S. Supreme Court were to fail, the Norton Simon Museum would still have at least one more legal card to play in its bid to get Von Saher's claim thrown out without a trial.

In the same opinion that overturned Walter's 2012 dismissal of the case on foreign policy grounds relating to events in the late 1940s and early 1950s, the 9th Circuit panel instructed him to look at a later chapter in the saga and take up the legal question of whether the Dutch government's 1966 sale of "Adam" and "Eve" to a  Stroganoff heir qualified as an "act of state."

Established legal doctrine says that courts in the United States can't second-guess acts of state taken by foreign governments on their own soil. If the 1966 sale of "Adam" and "Eve" was, in fact, an act of state, Von Saher would have no grounds for challenging its legality, and the legality of the subsequent acquisition by Norton Simon.

"The Norton Simon ... believes that [the 1966 sale] was a governmental action that is entitled to respect under U.S. law," museum president Walter Timoshuk wrote in a July letter to the Wall Street Journal. Timoshuk was responding to a commentary by Ronald Lauder, a prominent New York art collector and donor to museums, which had cited the "Adam" and "Eve" case while decrying some museums' "immoral" clinging to looted artworks. "Art museums and their collections should not be built with stolen property," Lauder wrote.

Von Saher's attorneys have argued that the 1966 sale of "Adam" and "Eve" was not an act of state by the Netherlands, but a commercial transaction not covered by the Act of State doctrine.

One art-restitution claimant who was defeated by the Act of State doctrine was George Stroganoff-Scherbatoff, the Russian heir who sold "Adam" and "Eve" to Norton Simon.

In 1974 he was in much the same position as Von Saher is now, suing to force the Metropolitan Museum in New York to turn over a bust of Denis Diderot by the French sculptor Jean-Antoine Houdon. Like the Cranach paintings, the Soviets had seized the sculpture in the 1920s and sold it at the same 1931 auction in which Jacques Goudstikker bought "Adam" and "Eve."

A U.S. District Court judge in New York City dismissed Stroganoff-Scherbatoff's lawsuit, ruling that the 1920s seizure and later auction were both acts of state by the Soviet government that couldn't be challenged in U.S. courts.