Paul Rosenberg’s far-sighted promotion of the avant-garde may have saved his family from the Holocaust. 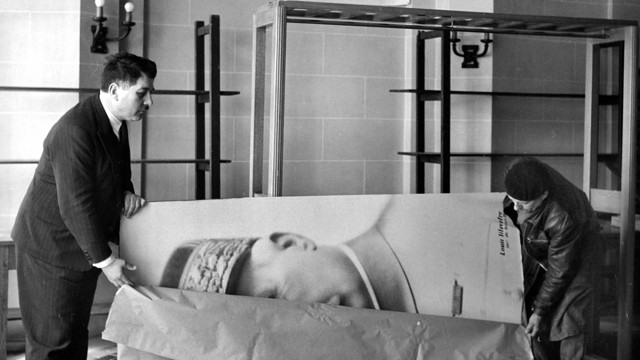 After the Nazis seized Rosenberg’s gallery, it was turned into the Institute for the Study of Jewish Questions.

In November 2013, German tax authorities revealed that they had found more than 1,200 works of art, many of them looted from Jewish collections during World War II, in the Munich apartment of an elderly recluse named Cornelius Gurlitt. The discovery of a fresh trove of Holocaust-era art, years after Germany was supposed to have addressed the issue, was shocking, and the story riveted the international media for weeks. Less noted, however, were Mr. Gurlitt’s aesthetic predilections: His collection included works by such leading figures of the Modern avant-garde as Picasso, Max Beckmann, Marc Chagall, Max Liebermann and Emil Nolde.

For decades it seemed, Mr. Gurlitt—whose father, Hildebrand Gurlitt, had been assigned by the Nazis to “acquire” Old Masters for the planned Führermuseum in Linz—had communed in his dusty apartment with the very artists Hitler rejected as “degenerate.” Among the first Gurlitt works to be identified was a 1921 portrait by Matisse, “Sitting Woman,” that had belonged to Paul Rosenberg, arguably the foremost French dealer in Modern art. In June 1940, just as the Germans were arriving in Paris, Rosenberg escaped to Portugal, and subsequently to the United States, leaving behind some 400 paintings that were later seized. In June of this year, a German task force declared that “Sitting Woman” rightfully belonged to Rosenberg’s heirs—the latest of dozens of works the family has reclaimed over the past half-century. It is said to be worth as much as $20 million.

Rarely has the cruel paradox of the Nazis’ art program been more directly in view. One of the most prominent Parisian dealers in the 1920s and 1930s, Paul Rosenberg (1881-1959) represented both Picasso and Matisse. As Anne Sinclair observes in “My Grandfather’s Gallery: A Family Memoir of Art and War,” his large gallery on the fashionable Rue la Boétie in the Eighth Arrondissement was “piled to the rafters with those ‘accursed’ or decadent works, the kind that the Nazis called entartete Kunst.” Yet German officials, together with their Vichy acolytes, recognized the Rosenberg gallery’s importance, and, soon after the fall of France in the summer of 1940, they were exploiting its inventory. There was no shortage of international buyers for Modern paintings during the war, and Nazi dealers like Gurlitt could easily trade such works in neutral countries like Switzerland for sought-after “Germanic” art or, as in the case of “Sitting Woman,” keep them for themselves.

Though it was written before the Gurlitt hoard came to light, “My Grandfather’s Gallery” suggests the extent to which the dark fate of Rosenberg’s inventory was also, fundamentally, a story about the art market. A well-known French television personality, Ms. Sinclair says that she had not been particularly involved in the hunt for missing paintings, noting that other family members have pursued them with greater zeal. (Armed with extensive records—which Rosenberg had presciently removed to London before the war—and decades of practice, the Rosenberg heirs have been among the most successful claimants of Nazi-looted art.) Nor, by her own account, did she have much interest in Rosenberg’s life until an unpleasant question from a French bureaucrat made her curious to find out “who my mother’s father really was.”

As a result, “My Grandfather’s Gallery” is less a systematic biography of a major art-world figure than what Ms. Sinclair calls “a series of impressionist strokes” about a man she hardly knew, inflected by her own, sometimes meandering thoughts. There are asides about French politics and oblique references to Ms. Sinclair’s recent travails as the wife of Dominique Strauss-Kahn, during whose house arrest in New York she wrote the book. (They are now divorced.)

Yet in shifting back and forth from the Vichy years to the early ’20s to the aftermath of the war, Ms. Sinclair offers revealing glimpses into what made the the gallery such a prime target for the Nazis. Particularly suggestive is her sketch of Rosenberg’s relations to the avant-garde, which draws on the dealer’s four-decade correspondence with Picasso. From his own father, who sold works by van Gogh and Cézanne before they were popular, Rosenberg learned to mix bread-and-butter sales of traditional fare with bold investments in new art. Thus a brisk trade in 19th-century favorites in a seigneurial, Right Bank setting allowed him to support a growing stable of contemporary painters and to give them a kind of establishment pedigree. “If visitors were unsure about Braque or Léger,” Ms. Sinclair writes, “Paul invited them upstairs to see softer-contoured works by Edgar Degas, Pierre-August Renoir, or August Rodin.”

By the 1920s, Rosenberg had become not only Picasso’s chief representative and financial backer but also his neighbor, having persuaded the Spanish genius to live in haute-bourgeois comfort adjacent to the gallery—where Rosenberg could keep close watch on his production. At the same time, through a series of astute alliances, constant promotion and over-the-top, Gagosian-like shows, the dealer helped turn works by Picasso and Matisse into sought-after drawing-room commodities among the beau monde. “I need a large number of canvases for this winter,” Rosenberg wrote Picasso in one typically breathless letter from 1921 quoted by Ms. Sinclair. “I’m ordering 100 from you, to be delivered at the end of the summer.”

As with the art world today, there was big business, but also big risk. Other dealers had tried and failed with Picasso—among them not only Daniel-Henry Kahnweiler, the gifted promoter of his early Cubist works, but also Rosenberg’s own brother, Léonce, who, though a pioneering supporter of the French avant-garde, was chronically insolvent. (Unmentioned by Ms. Sinclair, Braque famously punched Léonce before defecting to his brother’s more reliable firm.) Why was Rosenberg more successful? Scholars like Picasso biographer John Richardson regard him chiefly as a hard-driving entrepreneur who cannily raised prices, held on to inventory and diligently built markets in London, New York and across the Continent. Ms. Sinclair understandably prefers to see her grandfather conversing with “Pic” on a more intellectual plane, but she too wonders whether his retail acumen exceeded his appetite for artistic innovation.

More interesting, however, may be the international implications of Rosenberg’s shrewd dealing. Ms. Sinclair writes that in August 1940, having made it as far as Lisbon, Rosenberg obtained 21 visas to the United States, for himself and his extended family, at a time when very few were being issued. This, she coyly informs us, was thanks to the extraordinary intervention of “his old friend” Alfred Barr Jr., the well-connected director of the Museum of Modern Art in New York.

Barr had tried for years to organize a major Picasso retrospective at MoMA, for which Rosenberg’s collaboration was essential. In 1939, after lengthy negotiations and then weeks spent with Rosenberg in Paris, Barr was able to secure the loans he needed. The result was the landmark exhibition in the winter of 1939-40 that cemented Picasso’s position at the center of the Modern movement. Ms. Sinclair doesn’t reveal whether the two men discussed the possibility of Rosenberg’s relocation to New York during their extensive time together on the eve of the war, but she writes elsewhere that “Barr was deeply grateful for Paul’s willingness to enable this momentous show.” (In fact, though she doesn’t mention it, family records gathered by Elaine Rosenberg, Ms. Sinclair’s aunt, show that Barr was one of several prominent Americans, including Harvard professor Paul J. Sachs, who vouched in 1940 for Rosenberg’s signal importance.)

Thus Rosenberg’s far-sighted promotion of the avant-garde may be ultimately what saved his family from the Holocaust—even as it made him a particular object of Nazi hatred. Back in Paris, the Rosenberg gallery, along with the apartment above it that the Rosenbergs had lived in, was transformed into the Institute for the Study of Jewish Questions, a propaganda office run by the Nazis that was designed, according to its own mandate, to “resolve, at all cost and by all means, the Jewish question in France.” Among its habitués, Ms. Sinclair notes, was Louis-Ferdinand Céline, the great Modernist writer and rabid anti-Semite, who complained that his books attacking Jews were not being sufficiently promoted in the institute’s bookshop.

But how convinced were the Nazis, really, when it came to their opposition to Modern art? As a recent exhibition at the Neue Galerie in New York made clear, some, like Nazi propaganda minister Joseph Goebbels, initially saw Modernism as compatible with National Socialist ideology. Others, like the dealer Hildebrand Gurlitt, had themselves been champions of the avant-garde before being drawn into the Nazi art program. The greater irony, of course, is that the international market that Rosenberg had spent two decades building provided a ready outlet for the Nazis’ plunder.

In an absorbing final chapter, Ms. Sinclair considers her grandfather’s response to this dark story. Because of the MoMA exhibition, his Picassos, at least, had escaped the war, and they helped him establish a flourishing trade in New York City. But he never gave up on his lost works and pursued justice in his own way. As early as the fall of 1945, Rosenberg arrived in Zurich to confront some of the Swiss dealers who had traded them; though he also filed lawsuits, Ms. Sinclair suggests that he preferred to “recover his paintings one by one, in a Monte-Cristo-style personal vendetta.” One wonders what he would have made of Cornelius Gurlitt and his Modern-art-filled apartment, which somehow escaped notice in the same city where the Nazis had put on the notorious 1937 “Degenerate Art” exhibition.

Mr. Eakin is a senior editor at the New York Review of Books.