Vienna’s Natural History Museum (Naturhistorisches Museum) has restituted 177 botanical drawings and prints to the heirs of Dr. Ernst Moritz Kronfeld.  The restitution, while somewhat delayed following a 2011 recommendation by Austria’s Advisory Council under the country’s Law for the Restitution of Artworks from the Austrian National Museums (Bundesgesetz über die Rückgabe von Kunstgegenstände aus den Österreichischen Bundesmuseen), highlights the increasing sophistication of that Advisory Council, particularly compared to recent steps backward by the Limbach Commission in Germany.  Austria, once a lightening rod for criticism about confronting wartime and Nazi provenance issues, returned these drawings because of the clear problems with trying to portray any 1941 conveyance by a Viennese Jew as an arms’ length transaction—even without direct evidence of coercion.  Just as importantly, it brushed away the defense that the drawings had been acquired in good faith as an excuse to continued possession, a dramatic change from the perspective usually taken by civil law countries.

The Advisory Council’s opinion (available only in German, here), portrays Kronfeld as a classically—if tragically—fin de siècle Austrian Jewish figure.  He was born in Lemberg in Galicia in 1865, then part of the Austro-Hungarian empire.  Lemberg was the German-language name for what is now know as Lvov, Ukraine, and the capital of the increasingly autonomous region/kingdom of Galicia.  It was host to a thriving Jewish community by the time of Kronfeld’s childhood in the late empire.  In adulthood, Kronfeld was editor of several magazines in Vienna, a garden historian, and botanist, best known for his collections and knowledge of the palace at the Hapsburg summer palace of Schönbrunn (another first-rate state museum in Vienna).

The works reflected the work of botanist Nikolaus Joseph von Jacquinn and gardener Ryk van der Schot (who was later the court director of gardens and menagerie).  Von Jacquinn and van der Schot had participated in an Austrian expedition to the West Indies between 1754 and 1759, and the illustrations reflected their representations of the flora that they saw there.  The exhibition had been commissioned by Franz Stefan von Lothringen, husband of Austria’s iconic Empress Maria Theresia. 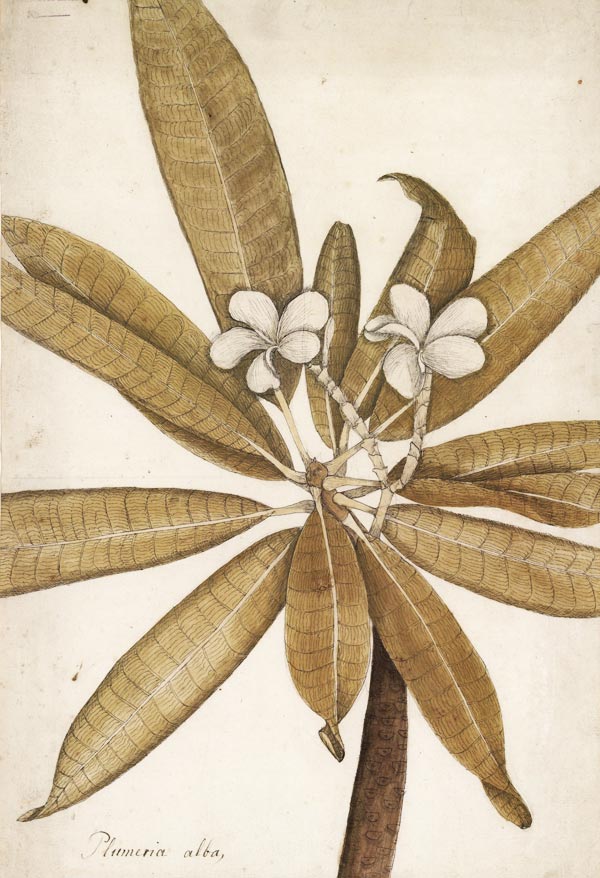 By 1938, the Advisory Council noted, Kronfeld was one of Austria’s largest collectors of books, pictures, documents, and plans of the park at Schönbrunn.  After the Anschluss in March of 1938, Kronfeld was required to submit the infamous standard inventory of all his property, which as for many other Viennese Jews simply provided a handy list of prized objects for Nazis to seek out.  Kronfeld offered his collection to the National Library (Nationalbibliothek) in 1940, via the antique dealer Dr. Rudolf Engel.  The only surviving record of this seems to be a letter from Engel to the National Library dated January 2, 1941, which rejected the offered price of 100 Reichsmarks (a paltry sum), and asking that the manuscripts be returned to Kronfeld.

Kronfeld died in his apartment in Vienna on March 16, 1942.  According to the documentation accompanying his death, he had property worth less than 300 RM, and a few clothes, in his possession.  Barely two months later, 14 pictures once in the Kronfeld collection were received by the Vienna municipal collections, transmitted by Baldur von Schirach, longtime head of the Hitler Youth and, later, Gauleiter (District Leader) of Vienna (Schirach was convicted of war crimes at Nuremberg, and sentenced to 20 years in prison.  He died in 1974).  Those 14 pictures were restituted in an earlier proceeding.  Kronfeld’s wife, his sole heir, was deported to Theresienstadt in August, 1942, and murdered at Treblinka in September, 1942.

In November, 1942, Engel offered a renewed portion of the Kronfeld collection (described as such) to the National Library.  The fate of the balance of the collection during and after the war is unclear.  The 177 objects resurfaced in 1988, offered again to the National Library by antiques dealer “W.K.”  That dealer’s archives indicate that the objects arrived there in 1980, of unknown provenance.

The Advisory Council acknowledged that it could not determine exactly what happened to the collection between 1942 and 1988, but concluded nonetheless (my translation):

These questions can be left open, because the sale by either Dr. Kronfeld or his widow would have been sales by persons in a persecuted group, and would also be void as an appropriation in connection with the deportation of Rosalia Kronfeld within the meaning of § 1 of the Annulment Acts (the determination of Rosalia Kronfeld as the sole heir and legal successor of her husband need not be analyzed further in this determination of restitution).

The Advisory Council determines, therefore, that the collection of Ernst Kronfeld eventually of his widow Rosalia Kronfeld, was seized.

The works were thus restituted to surviving heir Mario Lanzer, as well as the Israeli Cultural Society as representative for any other heirs.

This decision, as noted above, is more than three years old, and is one of many issued by the Advisory Council.  But it is important for the manner of its analysis.  First, it acknowledges that it cannot be determined with certainty who took Kronfeld’s collection, whether by “sale” or outright seizure.  Most commendably, however, it refuses to hide behind that fact and engages in inferential analysis that should be obvious to anyone: there is simply no possible way that Kronfeld could legitimately have disposed of his collection given his circumstances.  Quite unlike this summer’s ludicrous decision by the Limbach Commission in Germany over the claim by heirs of Clara Levy to The Three Graces (Drei Grazien) by Lovis Corinth (in soon-to-be-occupied Luxembourg), or last winter’s ruling in the Welfenschatz case (Jewish dealers targeted by Hermann Göring himself in 1935), this Austrian panel was not looking for a away to avoid the only real conclusion: Kronfeld was persecuted to the point of either selling the collection out of necessity, or it was stolen from him.  Perhaps most welcome, the Advisory Council implicitly acknowledges that it does not matter which to conclude that the works must be returned.  The decision nonetheless had the courage simply to say what was so clearly the case.  Circumstantial inferences take a bad rap, but as Henry David Thoreau said, “Circumstantial evidence is occasionally very convincing, such as when there is a trout in the milk” (as evidence of the dairy’s negligence, whether or not anyone observed the fish being put there).  Circumstantial evidence is indeed very convincing, especially when the collection of a recently deceased Viennese Jewish man turns up on the art market in 1942 (also after his wife and sole heir was murdered).

Equally welcome is the decision not to punish Kronfeld’s heirs for the NHM’s later good faith acquisition.  This is more typically in line with the Anglo-American property concept that a thief cannot convey good title.

In a broader sense, it is a reminder of the continued evolution of the Advisory Council.  Austria was once widely derided for willful blindness to its national collection’s Nazi-looting problems.  The Advisory Council is not perfect, and has issued decisions before that made people very upset.  But as I said a year ago in defending the decision over the Portrait of Amalie Zuckerkandl by Gustav Klimt from collateral attack (a defense over which I took some pointed comments), it is a system that is trying, and that is clearly developing its sophistication.  That is cause for celebration, and an example that the Limbach Commission (among others) would do well to follow.