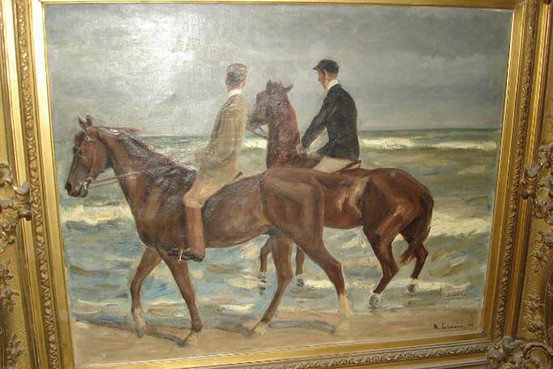 A picture made available by the Public Prosecutor's Office in Augsburg, Germany, of Max Liebermann's "Two Riders on the Beach," which was looted during WWII.

German government-appointed experts on Friday gave the green light to the restitution of one of the most valuable artworks in the trove of late collector Cornelius Gurlitt to its American owners.

Art experts mandated by Germany to comb Mr. Gurlitt's collection for Nazi loot said that "Two Riders on the Beach," a 1901 Max Liebermann painting, was looted during World War II and rightfully belonged to the heirs of David Friedmann, a German-Jewish collector who died in the early 1940s. The family is currently suing the Bavarian government for its return.

The announcement marks another step in a yearslong battle by mainly Jewish families to reclaim artworks looted from them in the 1930s and '40s that found their way into the collection of Mr. Gurlitt, son of a major art dealer for Adolf Hitler.

German authorities seized the collection from Mr. Gurlitt's Munich apartment in 2012 in the course of a routine tax investigation. They kept the find secret for nearly two years, prompting a diplomatic row with the U.S. and Israel after its existence was revealed late last year. Mr. Gurlitt died in May.

Mr. Friedmann, Mr. Toren's great-uncle, was a well-to-do collector who owned about 10 paintings targeted for seizure by the Nazis, including paintings by Camille Pissarro and Henri Rousseau. He died of natural causes; his daughter committed suicide to avoid Nazi persecution shortly thereafter.

"He was a rich man. He owned big estates, agricultural estates, but his love was art," he said of Mr. Friedmann.

Mr. Toren and his brother were the only members of the family to survive the Holocaust, he said. Both of his parents were gassed at Auschwitz. Mr. Toren came to the U.S. in 1954 and worked as an intellectual-property lawyer. He lives on the Upper East Side with his wife of 62 years.

His brother died several months ago and is survived by three daughters. Mr. Toren has a son. All of the surviving heirs would like the painting, he said, but they haven't decided who will get it. Mr. Toren believes Mr. Gurlitt may have had more than one of his great-uncle's pieces.

"It's not because I want them back to look at because I'm blind, I can't see them anyway. It's the principle," he said of his uncle's art.

In June, the task force created to sift through Mr. Gurlitt's collection announced that an Henri Matisse portrait, which experts say could fetch $20 million at auction, should be returned to the heirs of Jewish art dealer Paul Rosenberg.

If in good condition, the Liebermann work could meet or eclipse the artist's $3.4 million auction record set at Sotheby's in 2006. But the complete condition of the painting is unclear, said Mr. Matteis. If irrevocably damaged the painting's value could plummet.

Mr. Toren filed a lawsuit in March against the Bavarian and German governments for the return of the work and won't drop the case until the piece is returned, his lawyer said.

"We're pleased, but we don't want to count this as a bird in the hand," Mr. Matteis said.

When exactly the Matisse and Liebermann paintings will be given to the heirs is unclear.

Mr. Gurlitt's works have been in a legal limbo since his death. The elderly collector named the Kunstmuseum Bern as sole heir to the 1,000-strong collection. The Swiss museum has hired lawyers to investigate the collection and has until the end of the year under German law to accept the bequest.

If it does accept it, it will be legally bound to return the Matisse and Liebermann under an agreement signed between Mr. Gurlitt and the German government shortly before his death.

Christopher Marinello, the London-based lawyer handling the Matisse case, said German government officials and the Swiss museum hadn't yet told him or his client when the paining would be returned. Mr. Marinello saw the painting at the end of July in its storage facility, covered in dirt and a "milky white grime," the result, he said, of having been stored among fruit in Mr. Gurlitt's Bavarian flat.

Routine cleaning should restore the work to its original condition, Mr. Marinello said.

The task force originally thought the collection contained 1,400 artworks, but many of these items have been relabeled as documents instead.