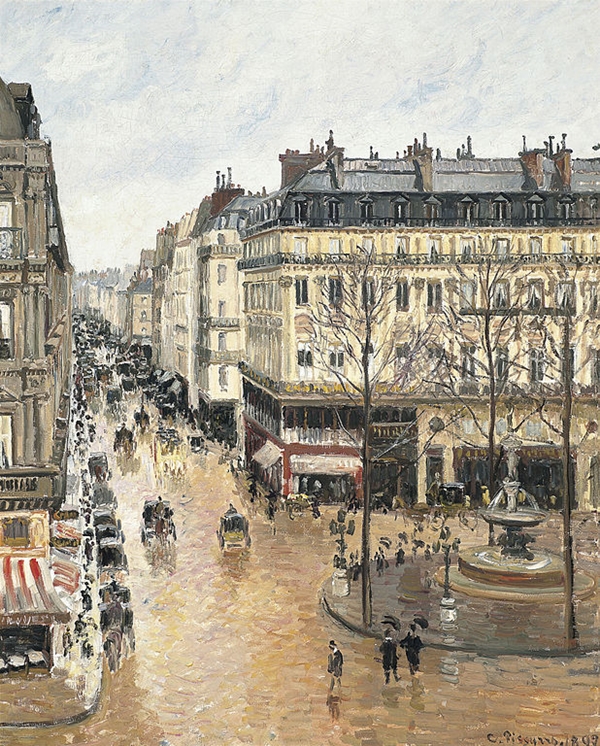 Madrid’s Thyssen-Bornemisza Museum refuses to give up its Nazi loot.

Specifically, Camille Pissarro’s painting Rue Saint-Honoré, après-midi, effet de pluie (1897), which the Nazis forced Lilly Cassirer, a German Jew, to sell for the equivalent of $360 in order to flee the country. The painting had been acquired by Cassirer’s father-in-law Julius directly from Pissarro.

On Friday Ronald Lauder, the World Jewish Congress‘s president, released a statement renewing calls on the museum to return the Impressionist street scene to Cassirer’s heirs.

“The Museum’s decision to exhaust every possible means of delay, and to refuse even to meet with the representatives of the Cassirer family to explore an amicable settlement, is deplorable,” Lauder said. “It is also contrary to agreements such as the Terezin Declaration, which Spain, along with dozens of nations, agreed to uphold.” The 2009 Terezin Declaration instructed nations that Holocaust claims should be resolved on the merits, and not on the basis of technical legal defenses, such as the passage of time.”

Lilly grandson Claude filed a lawsuit demanding the work’s restitution in 2005. He has since died, but two other members of the family, San Diego-based David and Ava Cassirer, have continued to fight for its return, winning a legal victory in December 2013 when panel of judges determined that the case did not interfere in US foreign affairs, reversing an earlier decision.

“For Spain and the museum to ignore the International Principles in this litigation not only seriously undermines the efforts of families to recover stolen art, but also discourages others from asserting their rights to property stolen by the Nazis,” Lauder added. “Spain’s recent decision granting the descendants of Jews forced into exile centuries ago the right to dual citizenship indicates that the country is seeking ways to address some of the nation’s darker history with respect to the Jewish people. We believe that an ethical and fair response to the Cassirer family’s claim would be a valuable and significant next step in this effort.”