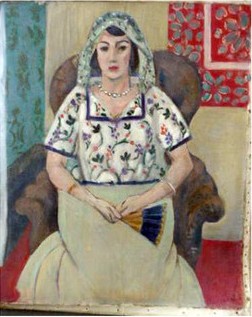 BERLIN - Experts appointed by the German government confirmed on Wednesday that a painting stolen by Nazis and now held in Germany rightfully belongs to the heirs of a late Jewish art dealer, putting the family's efforts to recover the art on the verge of success.

The task force of experts, which had combed a trove of art belonging to the late Cornelius Gurlitt, the son of one of Adolf Hitler's main art dealers, for Nazi loot, said that a Matisse oil painting was stolen from late Jewish art dealer Paul Rosenberg, and advised the painting be restituted. The task force said the decision to hand back the artwork now lies with the heirs of Mr. Gurlitt, who died last month.

The panel's decision "comes as no surprise, given the strength of the documentation we presented to the task force seven months ago," said Christopher Marinello, the lawyer representing the Rosenberg family.

Mr. Marinello said he was surprised that the family hadn't been informed about the finding before the release of the statement. Germany has faced criticism from art experts and foreign governments about a lack of transparency in its handling of the Gurlitt trove since the find became public in November.

"We would like to express our disappointment, however, with the Task Force's decision to release this information to the press before informing the heirs. It is the height of insensitivity and continues the vein of disregard for due process and compassion that we have seen since the discovery of the Gurlitt hoard."

Ingeborg Berggreen-Merkel, the restitution expert overseeing the Gurlitt task force, noted in the statement that before his death Mr. Gurlitt expressed a wish to return Nazi-looted artwork in accordance with the Washington Principles, an international agreement on returning art stolen by the Nazis, which Germany signed in 1998. "This commitment also obligates his heirs," she said.

The reclusive collector bequeathed his collection to the Kunstmuseum in Bern, Switzerland. The Kunstmuseum couldn't be reached for comment, although it has previously indicated a willingness to return all Nazi-looted works if it accepted Mr. Gurlitt's inheritance, which it hasn't done yet.

The heirs to Mr. Rosenberg, who include Anne Sinclair, a French journalist and the ex-wife of former International Monetary Fund head Dominique Strauss-Kahn, have been seeking the return of the painting since Mr. Gurlitt's case became public.

Before German media announced the existence of Mr. Gurlitt's trove, including the Matisse, last winter, Mr. Rosenberg's was unaware that the work still existed and thought it had been destroyed in the war.

The portrait, known internationally as "Woman With a Fan" and dating to the 1920s, is considered the trove's most valuable work. Matisse dealers say it could fetch up to $20 million at auction. The family says it was stolen from a bank vault in southern France during a 1941 raid carried out and documented by the Nazis.

It is unclear how the Matisse portrait came into the collection of Mr. Gurlitt's father, Hildebrand Gurlitt, and the task force said Wednesday the paper trail "could not be documented with final security"—although it said it assesses the work as legal property of Mr. Rosenberg's collection.

John Revill in Zurich contributed to this article.