Clinton presses Latvia to give back Jewish property


Property, whose owners were killed by the Nazis, was seized by the Soviet Union; rare point of contention between the allies. 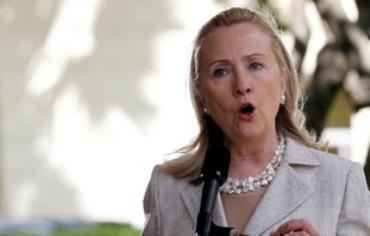 US Secretary of State Hillary Clinton.

RIGA - US Secretary of State Hillary Clinton pressed Latvia on Thursday to return to Jewish groups property that was seized by the Soviet Union and whose owners were killed by the Nazis, a rare point of tension between Washington and its Baltic ally.

The issue of returning property such as schools, some synagogues and other communal buildings is controversial in Latvia, one of the EU's poorest states and which is just recovering from a deep crisis. A nationalist minister quit the ruling coalition last week over the issue.

"The United States strongly supports restitution or compensation for those whose property was confiscated by either the Nazis or the Communists," Clinton told a news conference during a brief visit to the Baltic state.

Clinton, whose tour of Finland, Latvia and St Petersburg has been overshadowed by US-Russia tensions over Syria, said she had raised the issue in all her meetings, with the president, prime minister and foreign minister.

"We think that resolving these issues quickly and fairly is in everyone's interest and we hope that the process ... will be able to move forward and that this issue about communal property restitution can be addressed as soon as possible because it is a piece of unfinished historical business," Clinton said.

Latvia's main Jewish organization has claimed back the property which belonged to Jews before World War Two and which was seized when the Soviet Union annexed Latvia in 1940.

It says it is acting in the name of the tens of thousands of Jews who were killed during a subsequent Nazi occupation of the Baltic state in 1941-1944. Of a pre-war population of about 94,000, some 70,000 Jews were murdered during the Holocaust.

Latvia regained its independence in 1991 and introduced laws on returning nationalized property. But with no one left to claim communal Jewish property, the issue was left unresolved.

Foreign Minister Edgars Rinkevics said the government had a good dialogue with the Jewish community and was establishing a process for restitution, but the process had to move gradually.

"We have to exercise extra caution because they (the situation) is very sensitive due to historical considerations," he said, referring to the Soviet and Nazi occupations.

The nationalist minister for justice of junior coalition party All For Latvia/For Fatherland and Freedom resigned last week, saying the main coalition party of Prime Minister Valdis Dombrovskis was being too pushy on the restitution issue.

The nationalists say Jews should not get special treatment as laws already exist for returning nationalised property.