NGV to return painting to heirs of owner threatened by Nazis 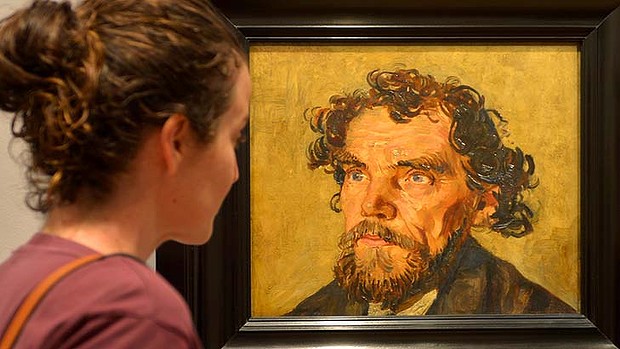 Head of a Man.

The National Gallery of Victoria has agreed to hand over a painting it has held for almost 75 years - and which, for much of that time, was thought to have been by Vincent van Gogh - to the legal heirs of its former owner, a Jewish man who sold the work under duress from Germany's Nazi regime.

NGV director Tony Ellwood said the gallery had written to Olaf Ossmann - the Zurich-based lawyer for two South African women deemed to be the legal heirs of Richard Semmel, a Jewish industrialist who auctioned the painting at a reduced price in Amsterdam in 1933 after fleeing Berlin - notifying him that it had been removed from public display.

It is believed to be the first case of its kind in Australia involving the restitution of an item from a forced sale in Nazi Germany.

The letter to Mr Ossmann confirmed that ''the gallery is now in a position to restitute the work and that the heirs are now the rightful owners'', Mr Ellwood said.

The decision follows Mr Ossmann's request to the NGV in December to return the painting, Head of a Man.

Mr Ossmann told Fairfax Media he had received the correspondence from the NGV but had not yet had a chance to consult his clients. He said he was open to talking about where the painting was finally displayed, including the possibility it could stay at the NGV.

Mr Ellwood said the gallery would not rule out buying the painting again if Mr Semmel's heirs decided to sell it.

''If they just say they would like the work returned swiftly, we would honour that. [But] if there is an intention to sell it, we would like to know because it's an important work now to Australia.''

Head of a Man is one of up to 50 works held in the gallery's collection that were bought in Europe in the 1930s and 1940s and whose provenance is being scrutinised. Those works have been listed on the gallery's website as part of its Provenance Research Project since 1999 under the Washington Conference Principles on Nazi-Confiscated Art.

The Art Gallery of NSW has 41 European paintings within its collection with gaps in their provenance, or no provenance, for the period between 1933-1945. Like the NGV, the gallery lists those paintings on its website under a firm statement: "In investigating all European paintings acquired after 1933 and created before 1945 that were or could have been in Europe at that time, the Gallery has found no evidence that any of our paintings were looted or improperly acquired and provides on this website all known provenance information of all international paintings in the collection." There have been no claims on the paintings.

Mr Semmel died in New York in 1950. His legal heirs are the granddaughters of a family friend who cared for him in the US, and to whom he left his estate.

''There's no precedent [here],'' Mr Ellwood said. ''It's a real opportunity for us to show leadership when we are faced with something that is quite complex, is high profile, and absolutely involves human rights … showing we are leaders in the museum field and have a strong moral compass.''

In 2007 the gallery asked the Van Gogh Museum to investigate the provenance of the painting, which was previously thought to have been painted by van Gogh in 1887. The NGV referred the case to the Victorian Government Solicitor's Office in December after receiving a letter from Mr Ossmann requesting the return of the painting to its ''rightful owners''.

VGSO principal solicitor Laura Vickers said her office had advised the gallery of its obligation under the Washington Convention. Under those principles, agreed upon in 2009, it was clear the gallery had a responsibility to come to a ''just and fair solution''.

''Once the painting is identified as having been confiscated during the Nazi era, the obligation is on the gallery … in making their own inquiries into the provenance of the artworks,'' Ms Vickers said.

However, Jewish Holocaust Centre executive director Warren Fineberg said it was a blight on Australia and its galleries that it had taken more than 70 years for galleries to ''wake up'' to the existence of what he referred to as ''stolen'' works in their collections.

But Robyn Sloggett, director of the Centre for Cultural Materials Conservation at the University of Melbourne, said the work of the NGV in establishing the provenance of Head of a Man was ''really rigorous'' and that the decision was a ''logical conclusion'' to the process.

''This is an example of rigorous best practice, where a work has been followed through every conceivable way in terms of attribution, authentication and provenance,'' she said. ''[It's] a strong position, which is ethical and appropriate.''

The Art Gallery of NSW has 41 European paintings within its collection with gaps in their provenance, or no provenance, for the period between 1933-1945.

Like the NGV, the gallery lists those paintings on its website under a firm statement: "In investigating all European paintings acquired after 1933 and created before 1945 that were or could have been in Europe at that time, the Gallery has found no evidence that any of our paintings were looted or improperly acquired and provides on this website all known provenance information of all international paintings in the collection."