Collector Had Change of Heart on Works Stolen From Jews, Wanted Other Pieces to Leave Germany 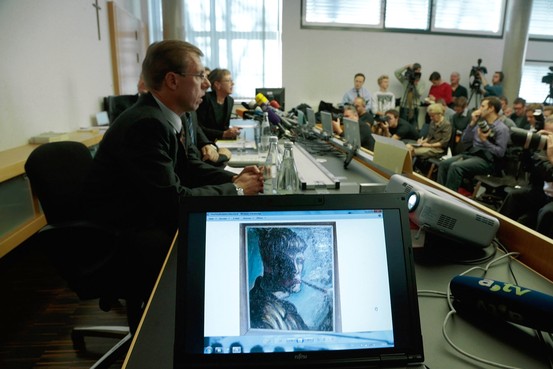 A November press conference in Augsburg, Germany about the seizure of the paintings.

Cornelius Gurlitt, 81 years old and his heart faltering, called a notary to his Bavarian hospital bed in early January, determined to write a last will and testament inspired by love and hate.

Mr. Gurlitt—stung by the local government's seizure of the cache of priceless art that he called his life's only love and by the world-wide furor over the fact that much of it was snatched from Jews by the Nazis—had two desires: to burnish his family name by giving the trove to a museum and to send it out of Germany.

Only two months earlier, after a German magazine had exposed his secret collection, Mr. Gurlitt had vowed never to return any of the paintings.

But the secret will he signed in the Ludwigsburg, Germany, hospital was his first step toward an agreement with German officials ensuring the looted works could go back to their rightful owners.

The story of the art collector's change of heart is filled with legal maneuvering, delicate negotiations and personal appeals to Mr. Gurlitt by German government officials urging him to let go of art he so loved. His about-face culminated in frenzied and fragile negotiations between his lawyers and the government that climaxed just before his death last week.

Mr. Gurlitt's decision, people close to him say, reflected in part his alienation from his country and anger at the Bavarian officials who confiscated his collection. At first, he "felt like a victim of Bavaria," a person close to the collector says. But, as he began "growing paler by the day, he wanted to keep his father's name from being tarnished and give back the Jewish art."

Mr. Gurlitt's story made global headlines in November, when the German magazine Focus reported that prosecutors in Augsburg had in 2012 secretly discovered about 1,400 valuable works in his apartment, including Nazi loot. In the final days of World War II, his father, art dealer Hildebrand Gurlitt, had loaded his family and those artworks into a truck to flee Allied bombing, ending up at a baron's castle in Bavaria.

After the Focus report, Germany faced intense pressure from the U.S., Israel and others to return the looted works to their rightful owners. But in Mr. Gurlitt, Germany faced a difficult negotiating partner. His health was rapidly deteriorating. He was under no legal obligation to cooperate. And his legal team at times splintered into camps, making it tough to negotiate.

A Wall Street Journal examination of the dealings over Mr. Gurlitt's collection—based on unreleased documents and on interviews with politicians, officials close to the case and a small group that assisted the collector—provides an inside look at his last months and how close Germany's deal came to collapsing before he died.

The government deal, involving Bavarian and national agencies, happened partly because of Mr. Gurlitt's hope he would see the art again before his death—a wish that went unfulfilled.

Mr. Gurlitt had spent his later years living a hermit's life in a fifth-floor apartment in Munich's gentrified Schwabing district, tending to artworks he inherited from his father, one of Adolf Hitler's art dealers.

Mr. Gurlitt had few outside contacts after his mother's death, his days punctuated by strolls to the grocery store and afternoon coffee at the Palate Game, a cafe with a Queen Elizabeth II bobblehead doll in the window. His only extravagance seemed limited to trying different cakes, says Alexander Vesely, the proprietor.

The incident that ended his tranquil existence occurred Sept. 22, 2010. On the EC197 train from Zurich to Munich, customs officials searched Mr. Gurlitt and found €9,000—below the limit requiring a declaration but enough to raise tax-evasion suspicions. Prosecutors in Augsburg, Bavaria's third-largest city, ordered a search of Mr. Gurlitt's home on Feb. 28, 2012. 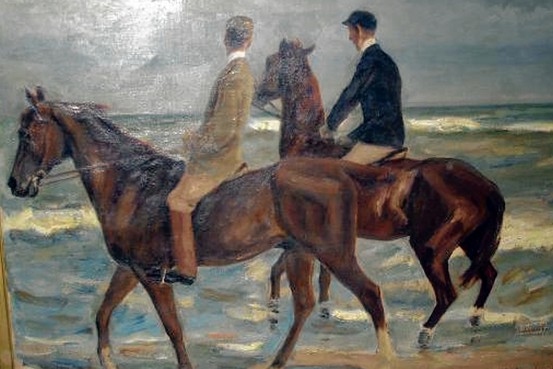 'Two Riders on the Beach' by Max Liebermann.

Once the news broke, though, the story of the seizure spiraled into a public-relations disaster. Winfried Bausback, Bavaria's justice minister, says he learned of the trove from the press. He was furious. Soon after the article, aides say, he gathered his staff and decided to create a task force of international experts under the authority of his ministry and Berlin's finance and culture ministries to expedite research into the artworks' provenance.

As U.S. and Israeli government officials began complaining about the case's handling, Mr. Bausback met with diplomats of both countries in Munich.

Mr. Bausback had a problem. Germany had signed the 1998 Washington Principles, which compelled the government to compensate victims of Nazi thefts. But Germany couldn't force Mr. Gurlitt, as a private person, to return the artworks. Even stolen pieces were beyond Germany's 30-year statute of limitations.

The only solution was to persuade the recluse to surrender offending works voluntarily. Mr. Gurlitt had ruled that out, telling Der Spiegel magazine in his only interview, last November: "I won't freely give anything back, no, no."

Time was running out. Mr. Gurlitt's heart was deteriorating. And with the prosecutors' investigation into what was initially thought to be a major art-trafficking operation going nowhere, Augsburg couldn't keep the paintings much longer.

Mr. Gurlitt had spent most of the two years since the raid brooding over his lost treasure. Help came on Dec. 23. After a request by Mr. Gurlitt's doctors, a Munich court appointed Christoph Edel, a local lawyer, as his guardian. Mr. Edel hired a spokesman, an art expert and a retinue of lawyers. 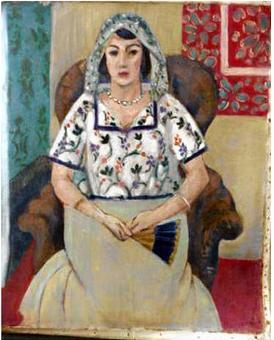 'Woman with a Fan' by Henri Matisse

Mr. Gurlitt's attitude in November oscillated between despair and anger at Bavarian officials, members of his team say. His main wish, they say—encouraged by his lawyer—was to recover the treasure that had consumed his life for decades. In the Der Spiegel interview, he had described his artworks as his life's only love, a comment he repeated to his team. He told the magazine his father opposed the Nazis and served them only to save works of art.

Yet Mr. Gurlitt's thinking shifted as weeks went by and he followed coverage of his case, people who had contact with him say. Anger and frustration began giving way to a desire to clear his and his father's names.

In December, a government official involved in the case sat down with Mr. Gurlitt for what the official described as a serene, deeply personal one-on-one conversation.

As they talked, this person suggested Mr. Gurlitt could transfer his collection to a foundation—preferably in Germany—that would restore stolen art to its rightful owners in line with the Washington Principles and show the rest in a state-financed museum. He seemed interested.

A few weeks later, Mr. Gurlitt took the idea but used it to snub his native land.

Now hospitalized in Ludwigsburg and awaiting surgery after his heart condition deteriorated, he summoned the notary, according to members of his team. With Mr. Edel present, the notary certified a will that would transfer Mr. Gurlitt's entire estate to the Kunstmuseum in Bern, Switzerland.

Mathias Frehner, the museum's director, says he never had contact with Mr. Gurlitt. Yet Mr. Gurlitt had an old connection to the Swiss capital and an indirect one to the museum.

In 1990, he sold an unidentified artwork for $48,757 via the Kornfeld auction house in Bern and told a lawyer earlier this year that Eberhard Kornfeld, the auction house's owner, remained an acquaintance. Mr. Kornfeld is a significant patron of the museum. Mr. Kornfeld declined to be interviewed. A spokeswoman for the auction house confirms the 1990 transaction but says it had no further dealings with Mr. Gurlitt. Members of Mr. Gurlitt's team say they had no indication he and Mr. Kornfeld had spoken before he wrote his will.

Mr. Bausback, the Bavarian justice minister, wasn't aware of the will. But he had spoken with the official who had met Mr. Gurlitt in December and was aware of the shift in the collector's thinking. He decided to seize the opportunity.

He instructed Walter Schön, his deputy, and Ingeborg Berggreen-Merkel, the head of the task force researching the collection, to negotiate with Mr. Gurlitt's lawyers about the restitution of the stolen artworks. In six meetings over three months beginning Jan. 18, the minister's negotiators felt they were making progress.

In March, the talks hit a setback. A dispute flared between Mr. Gurlitt's two main lawyers. Hannes Hartung, a civil-law expert, insisted the paintings should be sold and Mr. Gurlitt given a share of the proceeds. Tido Park, a criminal lawyer, disagreed, arguing Mr. Gurlitt should just return the art. The two sometimes clashed during the negotiations with the government. Mr. Hartung confirmed the dispute, saying he wanted a "mutually beneficial solution" for Mr. Gurlitt and the heirs to the artworks' original owners.

Mr. Gurlitt's lawyers in January and February filed two criminal complaints against the prosecutors for breaching the secrecy of their investigation and for impounding Mr. Gurlitt's art.

In February, Mr. Edel announced he had removed 60 fresh artworks, whose existence was hitherto unknown, from Mr. Gurlitt's second home in Salzburg, Austria, and put them into storage. These included a Claude Monet painting that experts valued at $12 million and that had been presumed lost.

With tensions in Mr. Gurlitt's team threatening to torpedo the negotiations, Mr. Edel visited Mr. Gurlitt at the intensive-care unit. Mr. Gurlitt, growing impatient to finalize the talks, instructed his guardian to end Mr. Hartung's contract, which Mr. Edel did on March 27, according to a person briefed on the meeting. While Mr. Hartung's dismissal crippled parallel negotiations he had been conducting with French and American heirs to a Matisse painting in the trove, valued at $20 million, it propelled the talks with the government.

After Mr. Gurlitt's operation, Mr. Edel suggested he move to a nursing home. Mr. Gurlitt rejected the idea. His team installed a hospital bed in his apartment, hiring 24-hour caretakers and a guard.

The agreement in which Mr. Gurlitt would pledge to return all stolen works was finalized between the lawyers and the government the first week of April. Mr. Gurlitt asked for the weekend of April 5 to read through the six-page contract. The government negotiators, aware of his declining health, had inserted a clause that would bind Mr. Gurlitt's heirs.

On April 7 at 1 p.m., in the presence of Mr. Edel, he signed the document, which gave the task force one year to research dubious paintings, with the German and Bavarian governments covering all costs. Mr. Edel called the Bavarian justice ministry shortly thereafter.

Two days later, the prosecutors' office said it released the art for Mr. Gurlitt to retrieve, citing "fresh elements," adding that its investigation was continuing. The art remains in a government-rented warehouse.

Mr. Gurlitt remained mentally active throughout the negotiations. Mr. Edel visited him on May 5, telling colleagues he hadn't appeared weaker than usual. He died the next day.

Two days later, at 9 a.m., Mr. Frehner, the director of the Kunstmuseum Bern, was drinking his espresso when he got a call from Mr. Edel, telling him his institution was due to inherit art worth millions of dollars after the German task force determined which works were looted. Journalists besieged the director within hours.

John Revill contributed to this article.