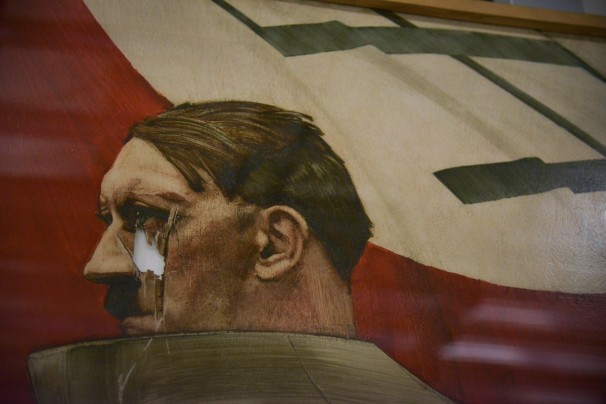 Another volume of Adolf Hitler’s notorious photo albums of looted Nazi art is set to be given to the National Archives on May 8 to mark the anniversary of the end of World War II in Europe, the Archives said Thursday.

The album, which contains photographs of looted paintings and other cultural items, is being donated to the Archives by the Monuments Men Foundation, an organization dedicated to the story of the lost art and the men who helped recover it.

“The Germans made several sets of these albums,” said Greg Bradsher, a senior archivist at the Archives. “This album is part of a set of about 100.”

The album was compiled by the Nazi organization whose task during World War II was to scour European homes and museums for artistic treasures for Hitler. The unit took photos of what it was stealing.

Thirty-nine such albums were found by the Allies in the closing days of World War II, and they were used to determine where the art was stolen and as evidence at war crimes trials. Those albums were turned over to the Archives in 1947.

In recent years, four more volumes turned up in private hands as a book and a movie raised the profile of “the Monuments Men,” the team of experts who as Allied soldiers worked to track down and recover the stolen art.

Three were donated to the Archives by the foundation in 2007 and 2012.

“There is the possibility that there could be 40 or 50 of them somewhere,” Bradsher said, “either in America or somewhere.”