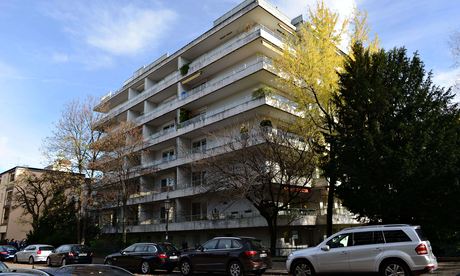 The building in Munich where more than 1,000 artworks were discovered in the flat of Cornelius Gurlitt. For security reasons the collection is unlikely to be returned there.

Public prosecutors in Augsburg have announced that they will release the artworks they seized from the home of reclusive collector Cornelius Gurlitt two years ago, making the 81-year-old once again the legal owner of the most contentious private collection in recent German history.

While the artworks' legal status may have changed, they are likely to remain in a secret location in Bavaria for now. Gurlitt signed an agreement with German authorities on Monday to allow a taskforce of experts to continue examining the providence of the works for another year – a process which is under increasing criticism for its slow progress and lack of transparency.

In 2012, 1,280 works including pieces by Picasso, Chagall and Matisse were seized from Gurlitt's Munich home by investigators who suspected some of them had originally been looted by the Nazis. When the find was made public in November last year, many hoped that any stolen works in the collection would eventually be returned to the descendants of the rightful owners, many of them Jewish collectors.

But five months later, the case has become caught up in bureaucracy. On Wednesday the public prosecutor in Augsburg had to give in to a complaint from Gurlitt's lawyers and release the hoard. While Gurlitt is still being investigated for possible tax evasion, he is now once again the rightful owner of the pictures, unless it can be proved that some of them count as looted art.

Stephan Holzinger, a spokesman for Gurlitt, said the ruling was a significant step in redeeming the collector's name: "This is a good day for Cornelius Gurlitt," Holzinger said in a statement. Around 500 artworks were originally suspected of having been looted by the Nazis, though Gurlitt's legal team puts the number much lower.

Holzinger told the Guardian that 300-350 works were owned by the Gurlitt family before Hitler came to power. Gurlitt's lawyers said they were aware of only seven restitution claims so far, including two claims for Henri Matisse's painting Seated Woman.

It remains unclear where the works will eventually end up – Gurlitt's spokesperson said he would not comment "for security reasons". Keeping the collection safe in Gurlitt's homes in Munich or Salzburg is presumably out of the question, given that their locations have been widely reported.

Some Bavarian politicians have already suggested they should be stored in a museum, where they could be seen by the public – an option that Holzinger seemed to reject, saying it was questionable "whether the Bavarian state should be rewarded for its disproportionate actions towards Mr Gurlitt". Gurlitt himself is currently in hospital.

Meanwhile, criticism of the Bavarian state prosecutor's handling of the case is mounting. Sabine Rudolph, a restitution expert and lawyer who represents the descendants of the Dresden art collector Fritz Salo Glaser, criticised the state taskforce's slow progress and lack of transparency. "Every time we see signs of progress, there is another catch", she told the Guardian.

Rudolph has written to the Augsburg state prosecutors four times, requesting access to documents that might illuminate how 13 works from Glaser's collection ended up in Gurlitt's hands. But after five months she feels no significant progress has been made. "A better taskforce would have put some of the key documents online," she said, criticising the choice of experts as "political" and saying that few art historians had been commissioned to work on the collection full-time.

In a statement, Ingeborg Berggreen-Merkel, the leader of the taskforce, welcomed the decision to release the pictures back into Gurlitt's hands, since it would allow "a more transparent display of the taskforce's working methods".