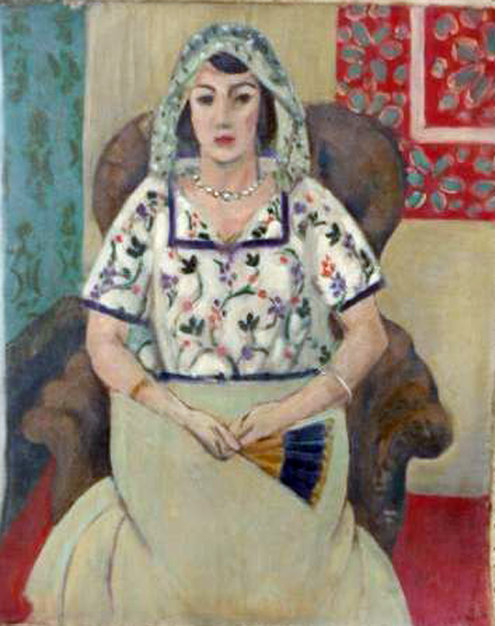 “Seated Woman/Woman Sitting in Armchair,” by Henri Matisse, is one of the paintings whose ownership is disputed.

BERLIN — The German government on Monday announced an agreement with Cornelius Gurlitt, the son of a Nazi-era art dealer, that would pave the way for the possible restitution of art wrongfully taken from Jewish owners and held in his private collection for decades.

Lawyers for Mr. Gurlitt, representatives of the state of Bavaria, and the German federal government agreed that a government-appointed team of international experts had one year in which to investigate the works seized from Mr. Gurlitt’s Munich apartment in 2012.

The deal would take effect when the works, which are being held by Bavarian authorities as part of a criminal investigation, are released. It applies to all art of questionable provenance in Mr. Gurlitt’s collection, which has become known as the Munich Art Trove. Authorities said Mr. Gurlitt can prove legal ownership of some of the works.

Reached after several weeks of negotiations, the agreement bypasses the 30-year statute of limitations that applies to stolen property in Germany, and in doing so, represents a willingness by the German government to resolve outstanding claims related to Nazi-looted art works.

The resolution comes months after the public first learned of the more than 1,280 works — including those by major artists such as Picasso, Chagall and Gauguin — held by Mr. Gurlitt. They were seized by Augsburg prosecutors as part of a tax evasion investigation. When the German news media broke the story of their existence last November, it triggered outrage around the world.

Responding to intense international criticism over how it had handled the art, the German government appointed a task force to investigate their provenance with an aim to return looted works to their rightful owners. But questions lingered over what would happen to the collection once it was released to Mr. Gurlitt, if he is cleared of the tax evasion charges. Legal experts also raised questions over whether the state had been justified in confiscating the collection in the first place.

Mr. Gurlitt, 81, who lived a reclusive life seemingly dedicated to defending the modern art collection amassed by his father, Hildebrand Gurlitt, during the Nazis’ reign, had initially insisted that all the art be returned to him. He declared in his only interview, with the newsmagazine Der Spiegel, that he would not give any of them up.

But his failing health led a Munich court late last year to appoint a legal guardian, Christoph Edel, to deal with Mr. Gurlitt’s legal, health and wealth affairs. Since then, Mr. Gurlitt has appeared more willing to negotiate with the authorities, leading up to the agreement.

“We are dealing with a top-class team of experts, and given Mr. Gurlitt’s advanced age and frail health, it can be expected that they should be able to complete their work within this time frame,” Mr. Holzinger said.

Monika Grütters, Germany’s culture minister, has made addressing restitution issues a priority since she came into office at the start of the year. She welcomed the agreement with Mr. Gurlitt, saying it would pave the way for an independent center that is being established to streamline and reinvigorate German efforts to handle restitution claims.

“Our experience gained through dealing with the Munich Art Trove will influence the new Lost Art Center,” Ms. Grütters said. Mr. Gurlitt further agreed that images of the works in question could be posted to the government’s database, which includes 458 pictures.

But the agreement also puts pressure on researchers to determine the history of the works. An additional researcher, appointed by Mr. Gurlitt, will be named to the task force when Mr. Gurlitt’s collection is released to him. Officials said they did not know when that would happen.

Greg Schneider, the executive vice president of the Jewish Claims Conference, expressed concern that the deadline could lead to the art being returned before the works’ history could be clarified. “Returning artwork to Mr. Gurlitt that has not been fully researched would be reprehensible,” Mr. Schneider said. “Either the government has to commit sufficient resources to complete the work within a year, or the deadline must be extended, if it is not met.”

Among the works is a well-known Matisse painting that the descendants of Paul Rosenberg, a French art dealer, said was taken from their family by the Nazis. The picture, “Seated Woman/Woman Sitting in Armchair,” was among the first to be identified by claimants seeking the return of the picture.

But Mr. Gurlitt’s lawyers said Monday that a rival claim had been filed for the painting, forcing the delay of a previously announced return of the work.

“I am legally required to investigate the new claims,” Mr. Edel said.

The new claimant was not identified, and no details were given on the basis of the claim. Representatives of the Rosenberg family declined to comment.

The latest twist in what appeared to be a relatively clear case reflects the challenges that authorities face with disputed works in the collection; cases that on the surface appear to be morally clear cut may run into snags within Germany’s complex legal system.

Government officials hope the agreement reached Monday will help restore confidence in Germany’s image abroad, which has been tarnished by the handling of Mr. Gurlitt’s collection.

“The meaning of the so-called Munich Art Trove reaches far beyond the criminal proceedings in connection with suspected tax evasion,” said Winfried Bausback, the justice minister for Bavaria. “It opens very basic and overarching questions about how we handle such artworks.”