An 18th-century painting by Francesco Lazzaro Guardi, looted by German Nazis during WWII, is to be returned to Poland on Monday at a ceremony in Berlin. 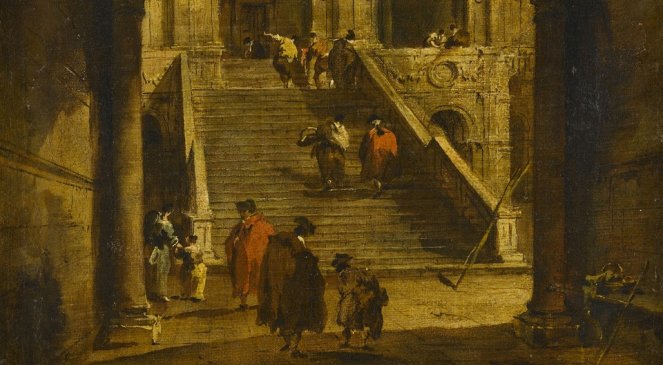 The painting ‘Palace Stairs’ is to be handed over by German Foreign Minister Frank-Walter Steinmeier to his Polish counterpart Radoslaw Sikorski.

Poland issued a request for the return of the painting ‘Palace Stairs’, looted by the Germans from the National Museum in Warsaw, was listed in the catalogue of lost foreign paintings compiled in 1950, as Polish authorities came to terms with cultural losses during the second world war.

The work was purchased by the National Museum in Warsaw in 1925 from a private art collector and remained in its foreign painting gallery until the outbreak of World War Two.

At the end of 1939 it was transferred to the warehouses of the Special Agent for Securing and Safeguarding of Art and Cultural Treasures located at the Jagiellonian Library in Kraków and several years later it was moved to Governor Hans Frank's headquarters at the Wawel Castle.

In 1944, during the evacuation of Frank’s office, it was transported, alongside other most works of art including Leonardo’s ‘Lady with an Ermine’, to Count Manfred von Richthofen's castle in Sichow, Lower Silesia.

On the basis of the recently discovered documents, it was established that in December 1945 the painting was moved to an arts warehouse in Wiesbaden, and subsequently to the Central Collecting Point in Munich from which it was supposed to be returned to its previous owner.

In view of the fact that neither American authorities nor the German administration were able to establish the painting’s ownership, it was deposited at the University of Heidelberg and, later on, at the Kurpfalzische Museum in Heidelberg and the National Art Gallery in Stuttgart, where it remained until today.

A database of Polish war-time art losses contains almost 63,000 items, including close on 7,000 works by Polish painters Aleksander Gierymski, Jan Matejko, Jacek Malczewski, Stanisław Wyspiański among others, and 7,500 canvasses by foreign artists, including Raphael’s ‘Portrait of a Young Man’, which was looted by the Germans from the Czartoryski collection in Kraków.

The Ministry of Culture and National Heritage is currently making efforts to secure the return of 46 works of art stolen from Polish collections during World War Two. (mk/pg)