April
The Guardian 27 March 2014
By Philip Oltermann in Berlin 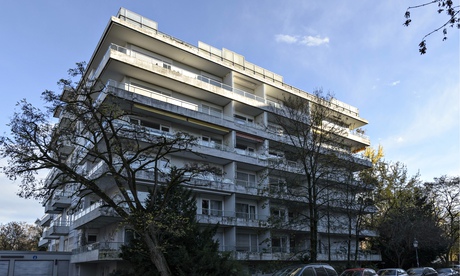 The Munich building where officials discovered the art treasures in Cornelius Gurlitt's apartment.

Cornelius Gurlitt, the reclusive elderly collector who was in 2012 discovered to have stashed away a unique collection of modernist masterpieces in his Munich flat, has signalled that he will return looted artworks to descendants of their original Jewish owners.

According to Gurlitt's lawyer, Christoph Edel, the 81-year-old has instructed his legal team that "should there be reasonable suspicions about individual works having been looted, please return them to their Jewish owners".

A portrait by Henri Matisse called Seating Woman is thought to be the first work that will be returned, to the descendants of Parisian art collector Paul Rosenberg, according to Süddeutsche Zeitung.

However, Gurlitt's lawyer also emphasised that "only a small percentage" of the collection was subject to restitutions claims so far – various media reports put their number at fewer than 50 works.

Further details have emerged about the second hoard of artworks at Gurlitt's Salzburg home, which was discovered in February this year. The Salzburg collection is considerably bigger than previously reported: a total of 238 items, rather than around 60, were discovered in the dilapidated house after a third inspection. Entire areas of the house had at first been inaccessible, with artworks hidden behind "bulky objects that were beyond repair", as one member of the search team described it.

While the Salzburg collection is smaller than that discovered in Gurlitt's Munich flat, it may end up being almost as valuable, containing artworks by Cézanne, Corot, Gaugin, Liebermann, Manet, Pissaro, Renoir and Toulouse-Latrec. Further highlight of the collection is Claude Monet's painting of Waterloo Bridge, Waterloobridge, En Temps Gris (1903) and Gustave Courbet's portrait of the utopian philosopher Jean Journet (1850).

Like the Munich collection, many of the works are drawings on paper, which were found piled on top of each other on two shelves, including sketches by Rodin and woodcuts by Emil Nolde. Seven paintings are by Cornelius Gurlitt's grandfather, Louis Gurlitt, a landscape artist who died in 1897.

Gurlitt's legal team has also been reshuffled. Hannes Hartung, the lawyer who has previously been in charge of negotiations with claimants, was stripped of his powers on Wednesday. Until now, Hartung had taken a relatively tough line in response to claims by descendants of Jewish collectors.