April
The Jewish Press 27 March 2014
By Hana Levi Julian
One Monet painting alone was estimated to be worth some $14 million (10 million euros). 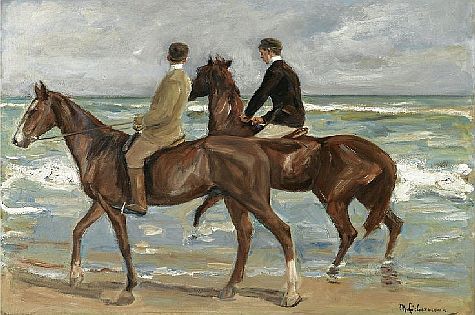 'Two Riders on the Beach' is an oil painting by German Jewish painter Max Liebermann.

A long-lost Monet and other art treasures stolen from Jews during the Holocaust have been discovered in the home of an 81-year-old German art collector, according to a report Wednesday on ORF Austrian state television.

The works by Claude Monet, Edouard Manet, Pablo Picasso and Auguste Rodin were discovered last November in Munich among the household items that belong to Cornelius Gurlitt.

One Monet painting alone was estimated to be worth some $14 million (10 million euros). Gurlitt had squirreled away the priceless paintings in his Munich apartment for decades among nearly 1,300 works of art, according to Der Spiegel. More were found by customs officials hidden away in Gurlitt’s house in Salzburg, all stolen during the Nazi era. Hildebrand Gurlitt, his father, was known to have curried favor with the Nazis, Der Spiegel reported.

New York City resident David Toren is waiting for the German government to hand over at least one of those paintings. The octogenarian was a member of one of the last Kindertransports in August 1939 to save Jewish children from the Nazis before the gates to hell crashed shut.

Born in 1925, Toren made it to Sweden; his older brother ended up in Holland and then went on to England one day before the war began. Both of their parents ended their lives in the Nazi gas chambers.

But Toren, 88, is an attorney and the son of an art dealer who was also an attorney — and he is demanding the return of a painting that belonged to his father. The work, an oil painting by German impressionist Max Liebermann, is “Two Riders on the Beach.” It depicts two men riding horses on a beach along the foamy waves.

Toren’s father was arrested by the Gestapo the morning after Kristallnacht, and then asked to come with a Nazi general to his wealthy uncle’s home to finalize “sale” of one of his assets. Later in the day, relates Toren, his father was taken to Buchenwald concentration camp, where he was imprisoned for three weeks — the first time.

A letter by a government official dated in December 1939 documents the attempt by the Nazis to seize the art collection. “Subject: The securing of Jewish-owned art.” Among the works described was Liebermann’s painting – the artist, a “Jewish painter.”

Der Spiegel traced a carbon copy of a letter dated August 1942 showing a Breslau museum director involved in the appraisal and sale of Jewish collections for the Gestapo. In the letter, the museum director offered Hildebrand Gurlitt two Liebermann paintings in exchange for cash, one of which was “Two Riders on the Beach.” The other, “Basket Weavers,” also ended up in Gurlitt’s hands but later was auctioned off in Berlin.

In response, Toren’s son Peter, an attorney,  helped his father file a 19-page complaint demanding the Federal Republic of Germany, and by proxy the Free State of Bavaria, return the painting to Toren and his brother, its rightful inheritors.