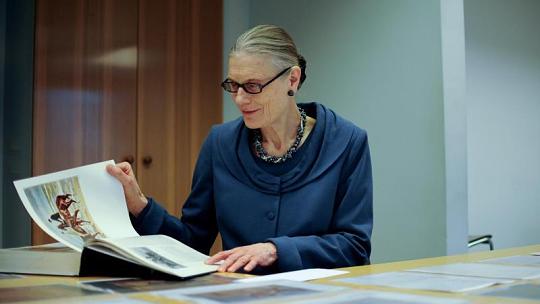 In this photo provided by Yale University, an 1888 oil painting entitled "Night Cafe" by impressionist Vincent Van Gogh is shown. The painting is at the center of a lawsuit between the university and Pierre Konowaloff of France, who claims ownership of the work by stating in recent court papers that Russian authorities in the 1917 revolution unlawfully confiscated the painting owned by Konowaloff's ancestor and that the United States deemed the theft a violation of international law. (AP Photo/Vincent Van Gogh.

NEW HAVEN, Conn. -- A federal judge in Connecticut has dismissed the claims of a man who he was the rightful owner of a Van Gogh painting that's been on display at Yale University for about 50 years.

Judge Alvin Thompson on Thursday granted Yale's request to deny the claims to the painting by Pierre Konowaloff, who says "The Night Cafe" was stolen from his family during the Russian revolution.

Yale sued in 2009 to assert its ownership rights and to block Konowaloff from claiming it. Konowaloff sought the return of the painting, or damages, and valued the painting at $120 million to $150 million.

The judge agreed with Yale's argument citing the act of state doctrine in which U.S. courts don't examine the validity of foreign governments' expropriation orders. He called the piece one of the world's most renowned paintings.

"We're pleased that the court has dismissed Konowaloff's claims," said Jonathan Freiman, Yale's attorney. "The Night Cafe is a timeless masterpiece that the public can see free of charge, and in this suit Yale has worked to make sure it stays that way."

Konowaloff says his great-grandfather, industrialist and aristocrat Ivan Morozov, bought "The Night Cafe" in 1908. Russia nationalized Morozov's property during the Communist revolution, and the Soviet government later sold the painting.

The 1888 artwork, which shows the inside of a nearly empty cafe with a few customers seated at tables along the walls, has been hanging in the Yale University Art Gallery.

Yale argued that the ownership of tens of billions of dollars' worth of art and other goods could be thrown into doubt if Konowaloff were allowed to take the painting. Any federal court invalidation of Russian nationalization decrees from the early 20th century also would create tensions between the United States and Russia, Yale has said.

The university says former owners have challenged titles to other property seized from them in Russia, but their claims were rejected by the U.S. Supreme Court and state, federal and foreign courts.

Konowaloff's attorney, Allan Gerson has said neither Russia nor the United States expressed any concerns about the case and that any ruling would not affect Russian paintings.

Gerson says the trend by U.S. courts has been to invalidate confiscations of art. He has said in court papers that Yale's argument amounted to compelling U.S. courts to "rubber-stamp good title on any dictator's plunder."

A message left with Gerson on Friday was not immediately returned.

Yale received the painting through a bequest from Yale alumnus Stephen Carlton Clark. The school says Clark bought the painting from a gallery in New York City in 1933 or 1934.

Konowaloff has called Yale's acquisition "art laundering." He argued that Russian authorities unlawfully confiscated the painting and that the United States deemed the theft a violation of international law.

Yale says the Russian nationalization of property, while sharply at odds with American values, did not violate international law.