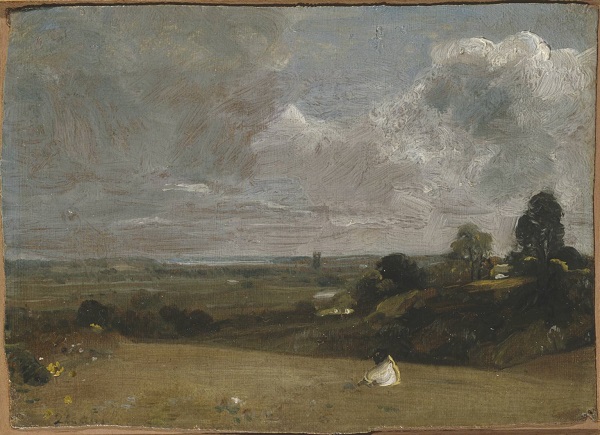 A different version of John Constable’s Dedham from Langham (circa 1813).
Courtesy Tate. Bequeathed by George Salting 1910.

On July 12th and 13th, 1943 John Constable’s British landscape painting Dedham From Langham (1813) was sold in a hasty auction presided over by the pro-Nazi Vichy government in Nice’s Hall du Savoy. The painting was just one lot in an extensive sale of Anna and John Jaffe’s estate, which included 60 oils in total. Anna had died in March of the previous year, resulting in her property being confiscated in accordance with a Vichy law that authorized the seizure and sale of the possessions of Jewish citizens.

Ask an attendant at the Musée des Beaux-Arts in small French-speaking Switzerland city of La Chaux-de-Fonds where the painting now hangs, or read the plaque placed under its frame, and you’ll get a similar story. No one is trying to cover up that this is a piece of Nazi loot. The painting’s heir, should the Vichy sale have not occurred, is also no secret. Retired history teacher Alain Monteagle has provided all requisite information to demonstrate that he would be the rightful heir. Most recently, he has launched a campaign in La Chaux-de-Fonds’ main square, passing out fliers explaining the blight of Nazi loot still present in public collections and asking passersby to sign a petition demanding the return of his painting.

Yet, the Musée des Beaux-Arts remains steadfast in their 2009 decision not to return the painting to Monteagle. The museum cites a Swiss law that protects purchasers of stolen goods who do so in good faith. That is, according to museum officials, due to the museum’s having received the work in 1986 from the Junod family without knowledge that it was Nazi-related loot, they can keep it. The Junod family purchased the work from a Geneva gallery in 1946 and gave it to La Chaux-de-Fonds as part of a larger collection on the condition that the collection in its entirety remains intact and permanently accessible to the public. “We were robbed a second time,” Monteagle told SwissInfo last year.

Thus, it appears that handing over Dedham From Langham to Monteagle would require a renegotiation of that gift. (It is unclear if the Junod family is open to such a renegotiation of terms.) But, at least according to the letter of the law as it currently stands, the painting can remain in the museum’s hands.

Monteagle is attempting to change that law—or at least to have it suspended in this case of extenuating circumstances—by using another provision in the Swiss legal system that allows for a popular referendum on existing statute if a petition baring the signatures of 10 percent of a jurisdiction’s registered voters is presented.

Legally under contention between Monteagle and the Musée des Beaux-Arts is not so much the Swiss statute on stolen goods but differences in emphasis being placed on two clauses in the Washington Conference Principles of 1998. Both parties cite the accord in their defense. The Principles were intended to set an international standard in the restitution of property confiscated during the Holocaust and have been signed by 44 countries, Switzerland included.

Monteagle points to section VIII of the principles, which mandates that “some fair and equitable solution” be reached expediently when the owners of Nazi-looted artworks can be determined. However, section VIII has consistently been open to a wide range of interpretations depending on both jurisdiction and circumstance. Results cast a spectrum from outright forfeiture, to a sale of the work in question in which current owners and heirs split the proceeds, or to cases, like that of Deadham From Langham, in which current owners maintain possession of the work.

How can such a seemingly black-and-white statement be open to such vast interpretation? As La Chaux-de-Fonds has demonstrated in their defense, the principles begin with what is in fact a much clearer directive, which holds that signatories “Are governed by different legal systems and that countries act in the context of their own legislation.” So, while France, Germany, the United States, and others are forced to resort to section VIII’s “equitable solution” provision even in cases where the current owners didn’t know an artwork was Nazi loot when they purchased it, Switzerland does not.

The museum has counseled Monteagle to seek monetary compensation for the work from the French. They have also offered to transfer symbolic ownership of the work to his family under the condition that he will have no true ownership rights to the work. However, Monteagle remains interested only in full ownership and the return of Dedham From Langham to his family. He has been successful in the past with other works from the Kimbell Art Museum in Fort Worth, Texas and from the Louvre. But in this case, his hopes now lie solely with the sympathies of citizens of La Chaux-de-Fonds.