Wooing the Public to Recover Art 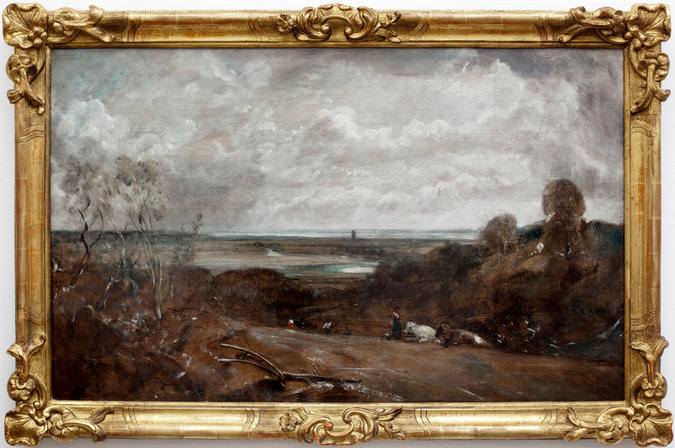 Constable’s  “Dedham From Langham,” in a Swiss museum. Credit Reto Albertalli for The New York Times

LA CHAUX-DE-FONDS, Switzerland — Alain Monteagle unfolded his blue chair and set up a white table at a vegetable market last weekend, covering it with brochures titled “The Looting of Art in War.” As a baker nearby peddled croissants that morning, Mr. Monteagle tried to sell his version of justice.

“We will tell our story to people in two’s and three’s, if that’s the only way we can get it back,” Mr. Monteagle, 67, a retired history teacher from outside Paris, said.

“It” is a painting by John Constable that was seized from his family, French Jews, during World War II and now hangs a few blocks away at the Musée des Beaux-Arts, a landmark salmon-colored Art Deco building in the center of town.

Swiss museum officials do not dispute that the painting was looted — they acknowledge the fact on a plaque below it. But they say that the museum accepted it in good faith, and that Swiss law does not require restitution in such circumstances.

So Mr. Monteagle and his relatives have taken to the soapbox. They are using the local Swiss system of popular referendums — which require the signatures of at least 10 percent of registered voters, 2,500 in this case — to  bring the issue before elected officials, since the museum is owned by the town. And they are taking the early, tentative steps required to force the local legislature to put an issue to a vote; if the legislature were to approve, more signatures could be gathered for a communitywide vote. 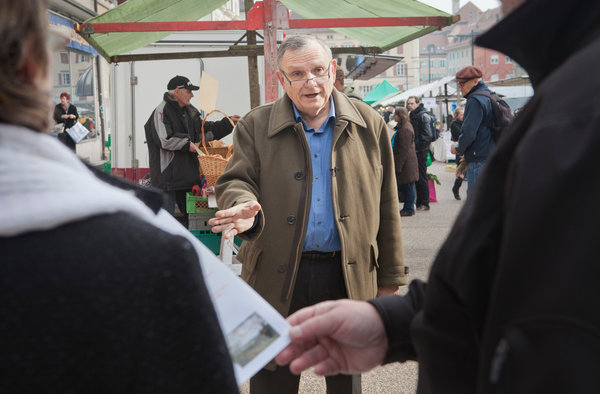 Alain Monteagle in Switzerland, campaigning for the return of a painting taken from an ancestor in World War II. Credit Reto Albertalli for The New York Times

In this border town of more than 38,000 in “Watch Valley,” the hub of the Swiss watch industry, referendums typically decide matters like issuing parking passes, not war reparations.

Indeed, Marc Masurovsky, founder of the Holocaust Art Restitution Project in Washington, described the family’s petitioning as unprecedented in efforts to recover art lost during the war.

“It will shed light,” he said, “on the denial of due process to victims of Nazi plunder by Swiss legal authorities and their unwillingness to call into question the good faith of dealers who acted in collusion with German agents of the Nazi government.”

On a more personal level, the effort led to encounters in which, over a period of three days, a family that suffered a loss made appeals directly to citizens who had no role in the seizures but now had some power to amend them.

From the very beginning, after a local politician advised two family members that their petitions did not meet strict formats to be accepted, this foray was more a scouting expedition than a full-scale petition drive. Still, they were encouraged to press forward with no set deadline other than their zeal.

“It’s normal to try and recover what is lost,” said Jean-Marie Sataux, a resident who volunteered to support them at the market. He said he had never heard of the painting, but added, “If the family has the documentation, then they should be able get it back.”

The reception from some others was cooler at the market, as well as outside the nearby Cinéma Eden, where Mr. Monteagle and his cousin, Alix Cauquelin, 58, set up shop in the evening near a huge poster for the film “The Monuments Men,” Hollywood’s take on the effort by the Allies to recover art stolen by the Nazis. Some people passed by hurriedly as the cousins appealed to them to read the real story of a family ordeal that has played out for more than 70 years.

“It’s too much right now,” one departing moviegoer said as Mr. Monteagle tried to press his brochures on her.

Mr. Monteagle’s family has already recovered eight other looted paintings from a private owner and museums, including the Louvre and the Kimbell Art Museum in Fort Worth.

The Constable painting, “Dedham From Langham,” a 19th-century landscape of the English countryside, was seized in Nice, France, in 1943, along with all the valuables of Mr. Monteagle’s great-aunt, Anna Jaffé, a childless British expatriate and wealthy Jewish art collector who had died a year earlier. Her French heir, a nephew who was Mr. Monteagle’s grandfather, died in Auschwitz.

The pro-Nazi Vichy government of France organized an auction in Nice, unloading everything from silver sugar pots and tapestries to paintings by Turner and Tenier.

Ultimately, the Constable painting passed among three new owners during the war and was purchased by a Geneva gallery, which sold it in 1946 to René Junod. He was an art collector and Swiss businessman who, with his wife, left a collection of 30 paintings to the museum here in 1986, along with money for renovation and expansion.

In 2006, the descendants located the Constable painting and lodged a claim. But since then, relations with town officials have been marked by tension and long periods of silence. Town officials were upset after Mr. Monteagle took two French journalists whom he introduced as his nephews to a meeting with a museum official in 2008. The journalists filmed the encounter, and the footage was televised, although Mr. Monteagle said he was not aware that they were filming it at the time.

City officials scoff at his explanation. They say they have tried to respect international principles of transparency regarding looted art — thus the plaque explaining that it was looted by the Vichy government — but insist that the museum lacks the right to return the painting.

Essentially, their argument is that the museum accepted the painting in good faith from the donors, relying on a Swiss law that protects a buyer of stolen goods who did not know their murky history. In contrast, in other countries like France, looted art remains just that, no matter the good faith of the last buyer.

Jean-Pierre Veya, the City Council member who handles cultural matters, said title to the painting could be transferred “symbolically” to the family members, as long as they keep the work in the museum and accessible to the public, since that was a condition of the donation. But there would be no exchange of money with that transaction.

“The most ethical and moral solution is that France, and the French who looted the art, should compensate the family,” Mr. Veya said.

By Sunday, Mr. Monteagle and his cousin had passed out most of their brochures, collected email addresses and plotted strategy for their return.

The formalities didn’t seem to matter, though, in the intimate setting of the Payot bookshop in the center of the town on Saturday. There the manager welcomed Mr. Monteagle to make a presentation. Seven people gathered around, listening to him describe his family’s efforts and give a quick history of looting.

“The climate is changing today, and the public is recognizing that looted art should be returned,” Mr. Monteagle said. “My family continues to search and we need your help.”