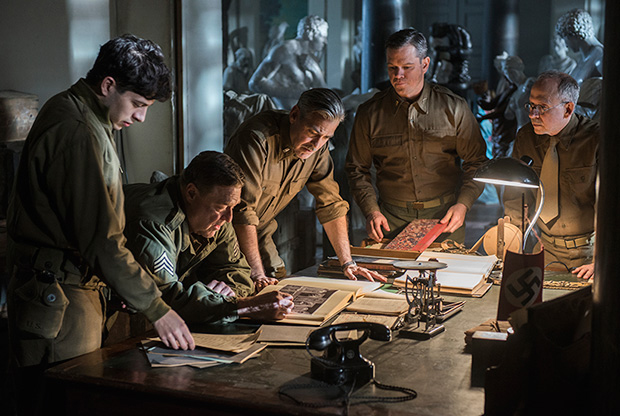 In the kind of publicity-generating move movie studios only dream about, the French government has announced that three valuable paintings looted by the Nazis will be returned to the descendants of their original owners the day before The Monuments Men is set to arrive in theaters in France, JTA reports. According to France’s Culture Ministry, the timing is intentional.

“Portrait of a Woman,” believed to be painted by Louis Tocque, originally belonged to Rosa and Jakob Oppenheimer, Jewish art dealers in Berlin. “Virgin with Child,” by Lippo Memmi or an associate, was seized in 1944 from banker Richard Soepkez in Cannes, and “Mountain Landscape,” by Flemish painter Joos de Momper, belonged to a non-Jewish Belgian banker whose property in France was confiscated in 1943.

The film, which is based on a book by Robert M. Edsel and was released in the U.S in February, tells the story of a group of archivists, scholars, and art historians tasked with finding and recovering artwork during World War II. Today an estimated 2,000 works of art believed to have been looted during that time remain in various French museums.

So far, France has returned 70 of those works. Three more will be reunited with the heirs of their rightful owners tomorrow in an official ceremony, and the film premieres on French theaters the following day.