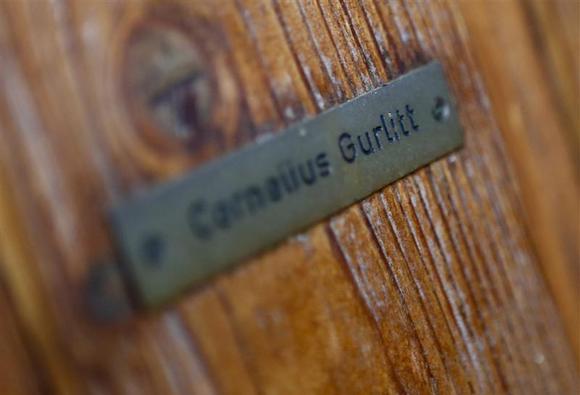 The name plate on the house of art collector Cornelius Gurlitt is pictured in Salzburg November 6, 2013.

(Reuters) - A German recluse whose billion-dollar art hoard was confiscated on suspicion that it contained works looted by the Nazis has filed a first formal complaint against the seizure, his lawyers said on Wednesday.

The 45-page complaint was filed at the Augsburg court in southern Germany which issued the original search order for Cornelius Gurlitt's flat. The complaint challenges the prosecutor's justification for seizing the 81-year-old's 1,407 art works on suspicion of tax evasion.

"Gurlitt and his defense team are well aware of the moral dimensions of this case," said Tido Park, one of Gurlitt's lawyers, in a statement. "However, a criminal proceeding is not the right place for issues of morality."

Gurlitt, whose father took orders from Adolf Hitler to buy and sell so-called 'degenerate art' to fund Nazi activities, aroused suspicion in 2010 when German customs officials stopped him on a train from Switzerland carrying a large sum of cash.

When authorities raided his apartment in February 2012 on suspicion of tax evasion, they found a collection of Modernist and Renaissance masterpieces valued by media reports at an estimated 1 billion euros.

In their complaint, filed on February 14, Gurlitt's lawyers said the seizure of the art works had violated the law. Of the 1,407 artworks seized, authorities are still holding 1,280 works suspected of being stolen or extorted by the Nazis.

"In the context of immense public interest and political debates, we have concerns about the legality of these proceedings," said Derek Setz, another lawyer for Gurlitt.

The legal challenge coincides with the launch of a website on Monday from Gurlitt's legal team that offers his side of the story, outlining the history, content and his view of the legal background of the works that were confiscated.

In a letter posted on the website, Gurlitt wrote that some of the media reports that have appeared about him and his collection are "not true or not quite true".

His website attempts to distinguish between "degenerate" art, which was purchased from museums and therefore considered property of the former German Reich, and "looted" art, which was

confiscated or forcibly sold below value.

Six claimants - including heirs of the Rosenberg, Friedmann, Glaser and Littmann families - have approached Gurlitt about the art. The approximately 40 works in question include a Matisse, a Liebermann and two works by Otto Dix.

Gurlitt's spokesman Stephan Holzinger said the team did not expect more than five percent of the 1,280 works to be challenged by claimants in search of works stolen or extorted by the Nazis.

Holzinger said the remainder of the collection was legally acquired or belonged to his family before 1933, the year the Nazis came to power in Germany.

Under German rules, works acquired from 1933 up to the present day but created before 1945 - when the Nazi regime fell - can be investigated as Nazi-looted property.

The website maintains Gurlitt acted in "good faith", as he inherited the works from his mother and "was at all times convinced" that the collection held mostly "degenerate" art that his father had legally purchased or traded for.

The website also says that, although no legal grounds exist to compel Gurlitt to return looted works, Gurlitt is considering these claims and will consider others as well.