German collector in talks with claimants, invites contacts from others 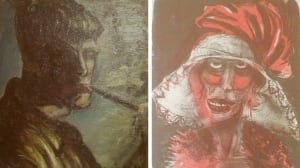 Reclusive art collector Cornelius Gurlitt has established a new website to tell his side of the story and allow prospective claimants to contact his lawyers regarding pieces in his massive art trove, which was seized by German authorities beginning in 2012. Michael Dalder/Reuters

Cornelius Gurlitt, the elderly collector at the centre of a massive German seizure of art, is in negotiations with six claimants seeking treasures stolen by the Nazis.

Lawyer Hannes Hartung said the claims cover about 40 pieces of the more than 1,400 works authorities confiscated from the collector.

Meanwhile, Gurlitt's lawyers have unveiled a new website that presents the octogenarian art collector's side of the story and includes a form for any more potential claimants to contact them regarding disputed pieces in his vast collection.

"With this informational site, we want to make clear that we are willing to engage in dialog with the public and any potential claimants," Stephan Holzinger, a spokesman for Gurlitt, said in a statement.

The new website is in German, with some sections translated into English.

After his collection is returned by German authorities, Gurlitt "is prepared to review and arrive at fair solutions together with the claimants for those works that are suspected of being looted art, in such instances where qualified, documented, and justified claims for their return are asserted by heirs," according to the website.

Last fall, German officials admitted that in 2012, authorities investigating a tax case had seized a trove of more than 1,400 artworks from Gurlitt — including pieces by masters such as Pablo Picasso, Henri Matisse and previously unknown works by artists such as Otto Dix — worth about $1.4 billion Cdn.

The massive confiscation of art from the collector's Munich apartment had been kept a secret but it was ultimately revealed by a German magazine in November. The nearly two years of secrecy earned German officials widespread criticism from international groups supporting the restitution of Nazi-looted art.

The government has since unveiled more detailed information about Gurlitt's collection in order to aid those still hunting for Jewish-owned artwork seized or stolen by the Nazis (or sold under duress) as Jews fled persecution before or during the Second World War.

According to Gurlitt, he legally and in good faith inherited his massive collection from his father Hildebrand Gurlitt, who had been an art historian and dealer who had worked with the Nazis.