The Monuments Men did more than rescue Nazi-looted art 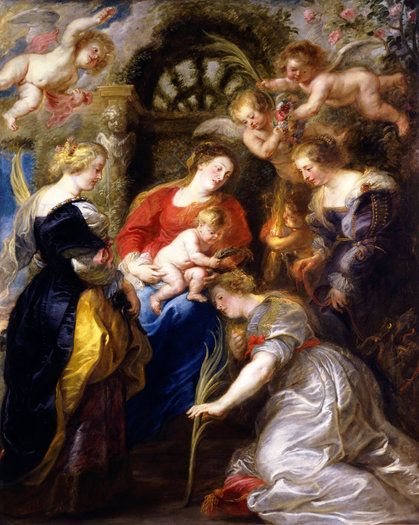 Peter Paul Rubens' life-size "The Mystic Marriage of St. Catherine" (1633) is a stellar example of the impact of the Monuments Men on collections. (Toledo Museum of Art)

The greatest Rubens altarpiece in America is in Ohio, at the Toledo Museum of Art. We have the Monuments Men to thank for that.

George Clooney’s galumphing all-star movie “The Monuments Men” did not impress the critics -- “inert,” lamented L.A. Times movie critic Kenneth Turan -- but the real-life story of soldiers sent to protect and rescue Europe’s great artworks during and after World War II is impressive.

So was its aftermath. The spotlight that the movie has trained on wartime events also reminded me of an important if unintended consequence of the work done by Americans among the Monuments Men (and, I hasten to add, a smaller but nonetheless critical group of Monuments Women).

Instrumental in saving threatened works of art and returning looted masterpieces to their rightful European owners, whether private individuals or public museums, they also used what they learned as art-historian-soldiers in Europe to enrich the collections of America’s art museums. Monuments Men returned to become curators and directors of museums in Baltimore; Boston; Buffalo, N.Y.; Minneapolis; New Haven, Conn.; New York, Worcester, Mass., and many more cities -- including Toledo. They brought their new knowledge with them.

Peter Paul Rubens’ life-size “The Mystic Marriage of St. Catherine” (1633) is a stellar example of the impact of the Monuments Men on collections. The visionary masterpiece shows the Christ Child, seated in the lap of the enthroned Virgin Mary, crowning martyred Catherine of Alexandria in a symbolic act of divine matrimony. Rubens’ sumptuous palette and explosive brushwork propel the celestial event into realms of ecstatic delirium.

The painting was bought for Toledo in 1950. Harvard-trained art historian Otto Wittman Jr. (1911-2001), associate director (and later director) of the Ohio museum, had been in charge of the Office of Strategic Services in Washington near the end of the war. In that capacity he traveled often to Europe to interview museum officials, art dealers and collectors and to investigate Nazi looted art.

The Rubens had been stolen by Hermann Goering, who oversaw much of the Nazi art-plunder, from the great Berlin collection assembled by Jewish banker and industrialist Leopold Koppel. It passed through the Munich collecting point for confiscated art, a site that Wittman visited many times.

After the war, when Wittman took the Toledo job, he learned from Metropolitan Museum of Art curator Theodore Rousseau -- with whom he had worked at the OSS -- that the painting was available. Koppel’s son, Albert, had recovered the stolen masterpiece and wished to sell it. The Met, unsure of its authenticity, turned down the opportunity to buy it.

Wittman’s connoisseurship, however, coupled with the knowledge he gained in Europe, gave him confidence to proceed with its acquisition.

He turned out to be right. Today the altarpiece is universally accepted as being entirely by Rubens’ hand. It’s a linchpin in the museum’s impressive collection, which is especially strong in 17th century Dutch, French and Italian painting, as well as 19th century American art.

“The Mystic Marriage of St. Catherine” is one of countless paintings and sculptures that found their way into American museum collections for a generation starting in the late 1940s, thanks to information gained and relationships forged by curators and directors who had been engaged in the restitution of Nazi looted art.

After Wittman’s 1976 retirement from Toledo, he moved to Southern California and became a trustee at the Los Angeles County Museum of Art and the J. Paul Getty Museum. His papers are today housed at the Getty Research Institute in Brentwood.

I haven’t perused them. But, if the Rubens coup is any guide, I suspect they contain surprises.