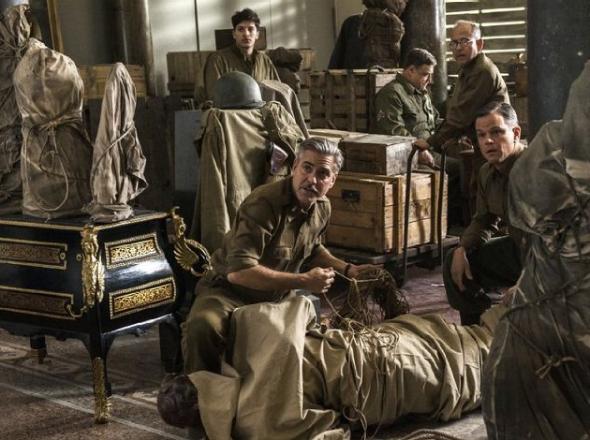 Many Americans will make their way to the multiplex this weekend to see The Monuments Men, George Clooney’s Hollywood homage to the small corps of art experts who heroically rescued thousands of looted masterpieces—and millions of artworks in all—from the clutches of the Nazis at the end of World War II. It’s a remarkable story (although the film is getting decidedly mixed reviews).

But it’s only part of the story, as a recent scholarly study shows: American GIs did plenty of looting too as they rolled into Germany in the winter and spring of 1945. They raided chicken coops, ransacked parlors, and blew up bank vaults. A few even managed to “liberate” their own priceless paintings, ancient manuscripts, and crown jewels.

“We are devastation,” a U.S. Army Sergeant named Raymond Gantter wrote home as the occupation advanced. “Where we have passed, little remains—no cameras, no pistols, no watches, very little jewelry, and damn few virgins. We leave behind us a spoor of broken dishes, emptied fruit jars, and plundered, dirty houses.”

Gantter’s blunt report is just one of many raw, first-hand accounts shared by historian Seth A. Givens in a sobering and thoughtful study of GI looting that appears in the current issue of the journal War In History. It’s an oft overlooked chapter of the American role in the European conflict, says Givens, a doctoral student at Ohio University in Athens. “It can be an uncomfortable subject,” he says.

Givens, however, was fascinated by the Nazi souvenirs that some of his Greatest Generation neighbors kept in their homes in the Ohio town where he grew up. “Nazi battle flags, daggers, things like that,” he recalls. “I began to ask: ‘What’s the story behind these things?’ ”

In graduate school, he tied to answer that question in a thick 2009 Master’s thesis that examined the complex motivations of the GI looters. International law allowed soldiers to take battlefield souvenirs, he notes, but clearly forbade them from seizing civilian possessions. Still, many GIs “saw looting in Germany as morally and legally justifiable,” he writes in his recent paper, which is based on the thesis. Many shared one infantryman’s “sentiment that ‘We were giving the Germans a taste of what they had been doing to others for years.’ ”

Revenge, however, was just one of many justifications. When U.S. forces first crossed into Germany in the bitter winter of ’45, a big motive was just staying warm. A paratrooper named Donald Burgett, for instance, recalled helping himself to a strip of fur he “ripped from a woman’s cloth coat hanging on the wall near the front door… [I] sewed the fur to the collar of my combat jacket… the fur kept the cold wind from my face and neck.” Other units showed even more sartorial flair, “and for a short time columns of troops could be seen wearing white lace as well as brightly coloured scarves.”

Another lure was liquor. “GIs searched tirelessly for hidden bottles of cognac, schnapps, champagne, and wine,” Givens writes. “The easiest way to acquire

alcohol, however, was to go to the source. ‘Every time you went into a town, the first thing everybody started looking for was the local distillery or brewery,’ ” one infantryman remembered.

Then there was the prospect of a nice free Leica camera or valuable watch. “When we took a town’s surrender, we would insist that they all bring out their cameras” and other valuables, one veteran recalled. Indeed, Givens notes “a common joke spread throughout Germany that ‘USA’ was actually an acronym for Uhren stehlen auch, or ‘They steal watches too.’ ”

Often, the goal was to quickly sell the stash for cash. “We looted what you could turn into cash and carry easy,” a veteran recalled. For many a soldier, “the spring of 1945 was a perfect time to augment his monthly pay,” Givens writes.

The U.S. high command fretted about the plunder. General Dwight D. Eisenhower had received numerous bitter complaints about looting from allies in France, Belgium and other liberated Nazi territories. The anger “threatened political relationships,” Givens notes, “as civilians had just endured German occupation and expected liberation to be better.”

But a crackdown proved largely ineffective. When one U.S. unit entered a small German town, Givens writes, the captain told his men: “The rule is no looting!’ Then, half under his breath: ‘And if you do any, see that you don’t get caught.’ ” The military punished just 72 soldiers for looting in 1944 and 1945, Givens notes, compared with nearly 3,000 charged with being “improperly dressed.”

The rarity of prosecution may have tempted some looters to go for bigger prizes. Blowing up bank vaults generally proved fruitless, Givens writes. But in a few cases, U.S. soldiers did rip off very valuable artwork from castles or vaults (much of it was ultimately returned to Germany, often decades later). The loot included paintings by Albrecht Durer, Raphael, the oldest known manuscript in German, a massive stamp collection, and a handwritten manuscript by Frederick the Great. In perhaps the most spectacular heist, several officers discovered a trove of jewels belonging to one of Europe’s royal families in a castle basement. The theft was eventually discovered, and the looters prosecuted.

Oh good--they made the commenting system even worse  More...

It is important to keep such thefts in perspective, Givens notes. “GIs, by far, took more everyday items from German citizens than they did invaluable objects,” he writes. And the Soviet Army actually encouraged much more massive and institutionalized looting in Germany. By the time the war ended, Russian trains were carrying home 50,000 packages of loot a month, and sometimes whole factories. “So large was the upsurge in war trophies that arrived in the Soviet Union that the postal service could not handle the flood of packages,” he writes.

And Givens says he’s looking forward to watching The Monuments Men, if only to see how Hollywood handles the psychological complexity of looting. “It is one of the few things about war that doesn’t have much to do with killing,” he notes. “Humans have this motivation to take things, especially during war, but I’ve learned they can take all kinds of different things, seemingly valuable or not, for all kinds of different reasons.”