Richard Mootz had a story to tell. But he had no way to prove it. 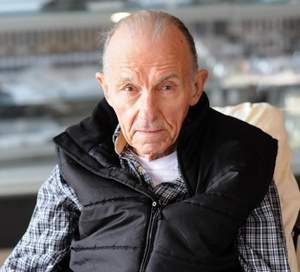 Richard Mootz tried for years to get his part of the story documented, all the while not knowing it was laid out in a 1945 internal report that was marked Secret. / GARY EMEIGH/THE NEWS JOURNAL

Mootz was a lowly Army private first class during World War II. He also was the rare U.S. soldier who could speak German. That enabled him to strike up a conversation near war’s end with two local women that led to the discovery of a huge cache of gold, money, art and grisly Nazi war trophies — a find at the center of the forthcoming, star-studded movie “The Monuments Men.”

The story of the found treasure became part of history and as he aged, he longed to get recognized for his part in the discovery. He wasn’t mentioned in any of the accounts of the stunning find.

Then, a relative made a call, which led to another and, finally, the discovery of a declassified 1945 Army report that identified Mootz and spelled out his important role.

Mootz, a native of Elmhurst, Del., who now lives in a nursing home in Millsboro, is the talkative sort. But he’s hardly boastful about the impact of the discovery, part of a recovery effort that found more than five million works of art and cultural items during the war’s final year.

Mootz, 89, was born in 1925 to a German father and French mother, and grew up during the Great Depression.

“You know those kite kits? About 3 cents?,” Mootz recalled during a recent interview. “Couldn’t even afford that.”

He went on to attend Henry C. Conrad High School, and was drafted into the Army in 1943.

Since Mootz spoke German as a child, he was still pretty fluent when he left home. At basic training, he ended up volunteering — like he’d been told not to do — to help with some carpentry on the base.

Mootz was sent overseas in July 1944 as an infantryman with the 90th Division. The unit went ashore in Normandy, where he was part of the Battle of St. Lo, the Allied breakout.

Mootz was wounded by shrapnel as he climbed the slippery bank of a creek. At almost the same time, he saw a fellow soldier take a bullet through the head, just under the helmet line.

“I’ll never forget that guy,” he said. “Big guy, broad shoulders ... and he had the bluest eyes.” His voice quavers as he recalls the moment. “I just caught him, just like that,” he said, motioning with his arms.

Mootz was out of action for 10 days or so, he thinks; a piece of shrapnel remains lodged on the inside of his upper right leg.

Mootz fought in the Battle of the Bulge after that, serving as a division military policeman.

A mine full of surprises

On April 4, 1945, the 358th Infantry Regiment of the 90th Division liberated the town of Merkers, Germany, a small village with a salt mine named Kaiseroda.

Mootz was assigned to a Civil Patrol unit, which had eight four-man teams. Instructed to keep order, they met with the mayor and set up parameters for peoples’ movement through town, including curfews. The Army had heard there might be gold and other valuables in Kaiseroda, and prohibited townspeople from going near it, the declassified report stated.

Two days later, Mootz said, “Two of our boys were walkin’ around (the mine). They saw these two women. They were outside, and they weren’t supposed to be.”

The soldiers couldn’t communicate with the women, so they brought them to Mootz.

“I asked them what languages they spoke,” he said. “They said French and German.” Mootz could speak the latter. “So that broke the ice.

“So we started talkin’,” Mootz said.

One, it turned out, was pregnant, and wanted to see a doctor. Mootz’s team was assigned a Jeep, so off they went.

As they chatted, the women loosened up, he said. Mootz, according to the report, asked them what sort of mine it was. And to his surprise, he said, “They just told me there was all this gold and stuff in the mine. A train had come in January, and they made everybody in town unload it — even British prisoners.”

There was so much material, the declassified report states that the women — he never wrote their names down — told Mootz, “it took 72 hours to unload and store” the goods.

After he dropped them off, he returned.

“I went back to the boys and said, ‘There’s a bunch of gold in the mine. Let’s drive up there and see. But they didn’t want to go, so I drove to the division commander’s office and told his secretary,” Mootz recalled.

One, a Lt. Col. Russell, left immediately for the mine, gathered townspeople and mine officials to confirm Mootz’s story, and hustled a tank battalion and military police unit to guard it.

It turned out there were five entrances, and even more units were moved into position.

Down inside, there were stacks of baled currency, bags of coins, about250 tons of gold, museum pieces, hundreds of art treasures, and the ghastly discovery of valises filled with gold and silver tooth fillings, eyeglass frames, watch cases, wedding rings, pearls, and precious stones taken from murdered concentration camp victims, according to a 1990 Army report written by the Center of Military History.

Mootz said he heard it took 32 10-ton trucks to haul it all away.

Mootz left the Army in December 1945.

In 1947, he married Edwina Stayer, and the couple had four girls: Carla, now deceased, Freda, Resi and Naida. The family had moved from Wilmington to Rehoboth Beach in 1951; Mootz spent the rest of his working days as a carpenter, a policeman, manager of a wood treatment plant and a mechanical worker.

Longing to be recognized

The story of the found treasure was recorded in accounts here and there, but apparently was not widely reported.

And as he aged, he longed to be recognized for his part in the discovery.

That recognition eventually went to the 345 members of the “Monuments Men,” the special Allied unit of museum directors, art historians and educators who worked during the last year of the war to recover Europe’s stolen art and cultural items.

His nephew, David Deputy of Hockessin, had been casting about for some sort of proof. One morning last year, Deputy heard a mention on a radio show about the Monuments Men Foundation, and connected with the group. A historian, Elizabeth Hudson, did some research at the National Archives and found the formerly secret military report that finally identified Mootz and spelled out his role.

“As soon as I heard that show, I thought, these guys will have it,” said Deputy, a board member of the Delaware Military Heritage Education Foundation and a brigadier general in the state Air National Guard.

“That was such a good feeling,” Deputy said. “Especially knowing he was still alive.”

The declassified report, dated April 26. 1945, states that the Army had been told, on the day of the town’s capture, of a recent movement of gold from Berlin to the Kaiserode mine. It also states that interviews the next day by an Army intelligence team had confirmed the mine contained money, gold, silver, paintings and jewels.

But it also credits Mootz with the big scoop. Mootz, finally, had the proof he’d hoped would one day turn up.