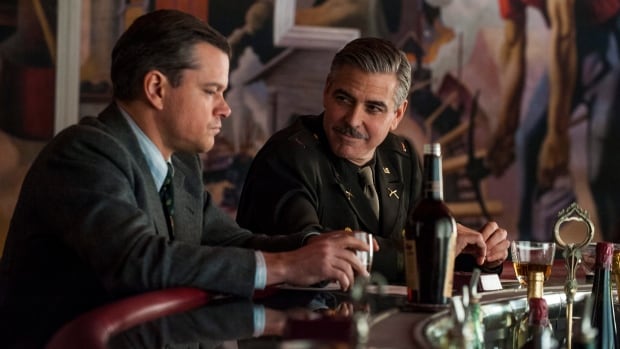 Matt Damon, left, and George Clooney, are among the stars in The Monuments Men, which details efforts to save valuable art from the Nazis during the Second World War. (Claudette Barius/Columbia Pictures/Sony/Associated Press)

"If Theodore Heinrich was alive today he'd love the spotlight," says University of Regina archivist Mark Vajcner, referring to the buzz around a new George Clooney movie with an intriguing Saskatchewan connection. 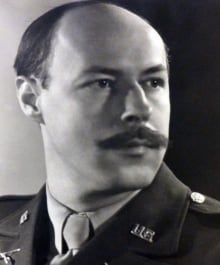 "He loved being in the spotlight and I think a Hollywood film documenting [his unit's work], he'd just love it!" Vajcner told CBC News as he laid out box after box of the late academic's personal papers, photos, books and tapes.

Hollywood and long-gone Regina university professors don't usually go together, but they do now.

Heinrich spent only one year (1965-65) teaching art at Regina College, the precursor to the University of Regina.

But the U of R's Heinrich collection is getting fresh attention now because of the Clooney connection. 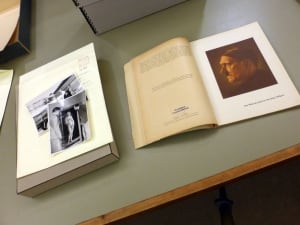 It tells the real life tale of  the Monuments, Fine Arts and Archives (MFAA) section of the Allied army.

It followed the troops into battle in the European theatre during the Second World War.

This specialized force of Allied soldiers from many nations was tasked with protecting culturally important monuments and other objects.

They were also told to recover and return art looted by the Nazis. The Clooney movie details their military adventures in the closing days of the war.

Heinrich was one of those MFAA soldiers, although in its post-war version. One might say he picked up where the Clooney character left off.

Before the war, Heinrich, a native of Tacoma, Wash., was a well-trained art historian and a well-heeled art collector (thanks to his wealthy family). 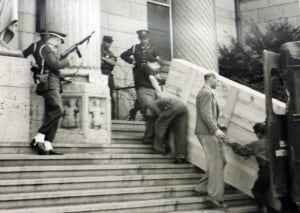 Theodore Heinrich, in light-coloured civilian dress, is shown receiving art at a depository for recovered lost or stolen art run by the U.S. Army. The photo was taken around 1949 in Wiesbaden, Germany. (University of Regina archives)

He volunteered for the service after the Japanese attacked Pearl Harbor and soon found himself in U.S. Army intelligence.

His job was to plan attacks on the German railway system and he and his colleagues did their job well. The German rail system was completely wrecked by the end of the war.

Soon after the Nazi surrender, Heinrich was slotted into the MFAA because of his arts background. He spent several successful years stationed with the unit in occupied Germany, busily reuniting the victims of Nazi arts theft with their lost paintings and sculptures. 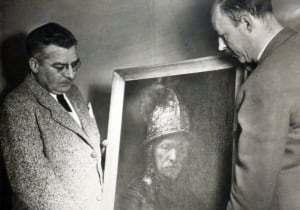 Heinrich (right) and an unidentified colleague examine what in 1949 was believed to be one of the most valuable paintings in the world, Rembrandt's Man With A Golden Helmet. It was hidden in a salt mine before being recovered by the Americans. In 1985, it was reclassified as painting done by a student of Rembrandt's. (University of Regina archives)

His job was to run what the Army called its "collection points," including one in the German city of Wiesbaden.

Art suspected stolen by the Nazis during the war was brought there, identified by Heinrich and his team, and then returned to its owners.

He oversaw the recovery of some of the most valuable art in the world and his office was filled on a daily basis with masterpieces by the likes of da Vinci, Botticelli, Rembrandt, Renoir and many more.

His excellent work was recognized by the time he completed his mission and he was highly decorated for his achievements.

After the war, his reputation as a fine arts administrator led him to the top job at the Royal Ontario Museum in Toronto and then for one year (1964-65) to an arts professorship at Regina College, the precursor of the University of Regina.

In Regina he was fondly remembered as vivacious, outgoing, even a bit of a party animal. Invitations to parties at his place were highly prized in Regina's arts and academic communities.

More importantly, though, he was an early champion of the flowering visual arts scene in the city during the '60s.

He was also friends with the elite Regina 5 artists' group. 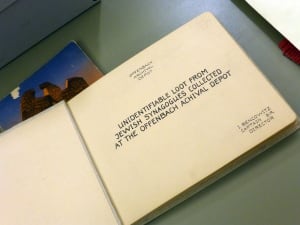 When he went on to long careers teaching art at York University and an international arts consultant, he continued to talk about the good things that were happening in painting and sculpture on the Prairies.

He left Regina for his arts professorship at York University, where he taught until his death in 1981.

Papers donated to U of R

Perhaps because of that happy year he spent in Regina, the U of R was able to share a large chunk of his personal papers with York University after he died. The extensive U of R collection is especially rich in content detailing his pre-war days as a world traveller and art collector as well as his military service, especially with the MFAA.

Some of the most moving documents in the Heinrich collection are the indexes he kept of art stolen from Jewish collectors, impossible now to return to the original owners because they perished in the Holocaust.

The disposition of this art remain a hot topic to this day with bodies likes the World Jewish Congress.

They're pushing the German government to work harder to restore art to the heirs of the Nazis' victims. This took on new urgency a few months ago when Germans police found a descendant of a Nazi art dealer still hoarding billions of dollars in wartime looted art.

In his day, though, this former Regina university professor, Theodore Heinrich did his best to set just that kind of situation right. And, thanks perhaps to Monuments Men, that work will be better remembered from now on. 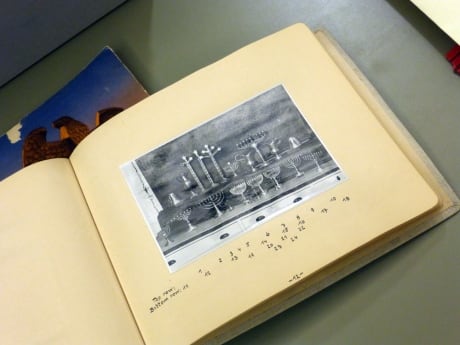 An inside page of a rare catalogue of stolen Jewish art objects. Many of these objects were lost forever when the Nazis melted them down for their precious metal content. (Sean Prpick)