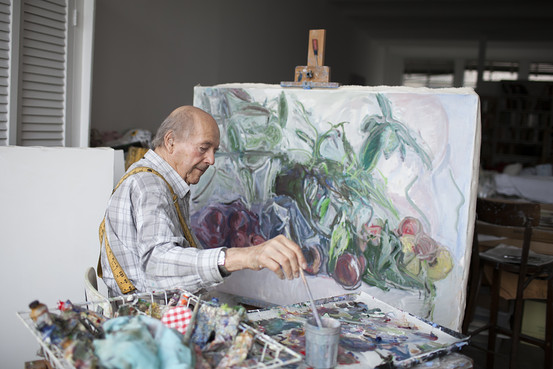 When an 18-year-old Peter Ruta first saw the Statue of Liberty as he sailed into New York's harbor in 1936, it triggered thoughts of relatives left behind in Nazi Germany.

Among such memories, that of his uncle, Gustav Kirstein, was more vivid than most. Mr. Ruta spent his happiest moments at his uncle's home in Leipzig in the summer of 1931. As he sailed into his new country, his only outfits were his uncle's old day suit and evening tails.

"My uncle introduced me to theater, took me to experience culture in Weimar and considered me a child of his," says Mr. Ruta, who remembers Mr. Kirstein's colorful art collection, including "Summer Evening on the Alster," a 1910 Max Liebermann painting that hung in the library.

On Wednesday, that painting—a tranquil urban vignette radiating European insouciance on the eve of World War I—goes to auction, one of several artworks returned to their Jewish owners who are now putting them up for sale. Estimated to fetch $1.2 million to $1.9 million at Sotheby's London sale, it came back into Mr. Ruta's life last year, when the auction house helped negotiate its restitution from a Hamburg-based corporate collection. 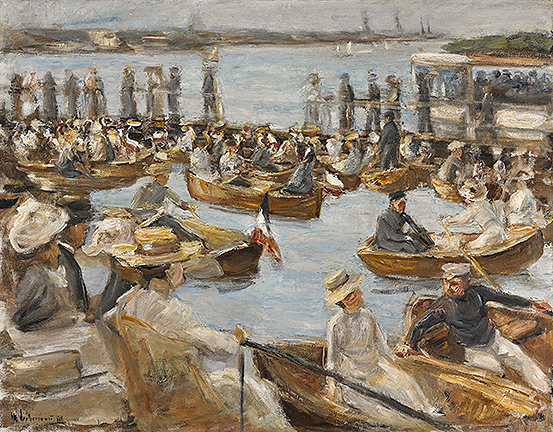 Max Liebermann's 'Summer Evening on the Alster' (1910) is up for auction in London. Sotheby's

Both Sotheby's and Christie's now frequently coordinate with buyers, sellers, restitution lawyers and private art-loss databases to broker deals on art they discover was looted by the Nazis.

"Often there are really two victims: the person from whom it was stolen and the institution or person who bought it in good faith," says Sotheby's specialist Philip Hook.

Mr. Kirstein, Mr. Ruta's uncle, died of a stroke in 1934 after his publishing business was taken over by the Nazis, or "Aryanized." His wife Clara, Mr. Ruta's aunt, committed suicide in 1939 to avoid deportation. The Nazis gave the seized Liebermann a false provenance to obfuscate its Jewish roots before selling it.

Christie's and Sotheby's investigate all works consigned to them that were created before 1945 and, less frequently, works missing from the collections of valued clients. Sotheby's declined to give the specifics of the Liebermann case, but the house has long worked with the Kirstein heirs. In 2001, it sold a set of restituted Max Klinger works for $519,600.

On Tuesday, Christie's is selling "The White House," an 1885 Paul Gauguin painting of a bucolic cottage. It follows a settlement between the relatives of the Earl of Jersey, who bought the work in 1943 in London, and the heirs of Berlin-based collector Richard Semmel, who lost possession of the work during the war.

While restituted works are usually auctioned and the proceeds shared among multiple heirs, collectors may buy art restituted from museums with a view to keeping the images on public display. "Collectors and museums that have looted art often will balk at prominently displaying it," says the billionaire collector Ronald Lauder.

Mr. Lauder made his most famous acquisition, Gustav Klimt's "Portrait of Adele Bloch Bauer I," through a private sale brokered by Christie's in 2006 for around $135 million, after Vienna's Belvedere museum restituted the work to Ms. Bloch Bauer's heirs. It hangs in his private Upper East Side museum, the Neue Galerie, near a $38 million Kirchner restituted to a Jewish family by Berlin's Brücke Museum and bought through Christie's.

Only blocks away, "Olive Groves with Les Alpilles in the Background," a Vincent van Gogh drawing, hangs at the Metropolitan Museum of Art. Mr. Lauder donated it after paying $8.6 million at Sotheby's in 1999.

The work came from the collection of Max Silberberg, whose heirs are also selling the highlight of Sotheby's upcoming auction: "Boulevard Montmartre, Spring Morning." The 1897 Camille Pissarro painting was donated to the Israel Museum in Jerusalem by John Loeb, a New York-based collector who bought the work in 1960, unaware of its forced sale in 1935.

The restitution process dredges up unpleasant memories for many World War II victims' families, and it can be worse if a work fails to sell at auction.

"It would be crazy if I said I wasn't disappointed. But ultimately we wanted it restituted to right a wrong, not to make money," says Lauren Gladstone, the granddaughter of Jewish collector Nathan Katz, whose Ferdinand Bol painting "Portrait of a Gentleman" went unsold at Christie's in New York last week.

Mr. Ruta, who is 95 and living in New York, says he feels stoic about the Liebermann auction, particularly due to the war's trauma.

After arriving in the U.S. and working at a publishing house, he joined the Army and fought in the Pacific theater, where he was wounded. He later studied art in Italy on a Fulbright fellowship, struggling to come to terms with the deaths of dozens of relatives during the Holocaust. "Considering that my family was killed by the Nazis, and I'm the only survivor, I feel justified in getting back this painting," he says. "However, I feel no emotional connection to it."