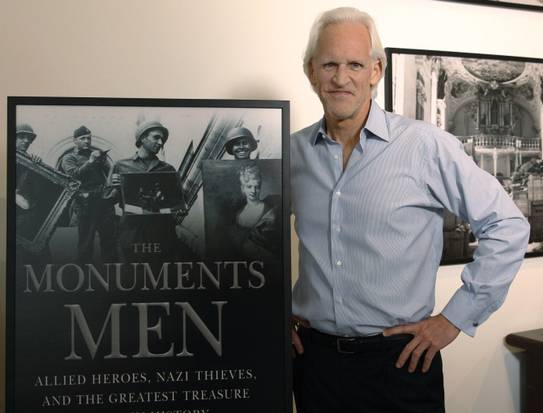 David Woo / Staff Photographer
Robert Edsel of Dallas created the Monuments Men Foundation for the Preservation of Art. The foundation's mission is "to preserve the legacy of the unprecedented and heroic work of the men and women who served in the Monuments, Fine Arts, and Archives during World War II.

Robert Edsel is no stranger to obsession, or shall we say a determination bordering on fanaticism.

He used it at St. Mark’s School of Texas, where he became a nationally ranked tennis player, and at Southern Methodist University, where he dreamed of joining the pro tour.

He used it in the oil and gas industry, leading to the multimillion-dollar sale of his company, Gemini Exploration.

Edsel, 57, is in the limelight once again, this time as the best-selling author whose 2009 book, The Monuments Men, has spawned a movie, which opens nationwide on Friday.

Like a tennis player waiting for the best possible shot, Edsel held out for an elite partnership with George Clooney, who directs and stars in The Monuments Men, and his business partner Grant Heslov, with whom Clooney adapted the screenplay.

It’s all quite heady, and at the moment, Edsel’s whirlwind life is even more of one.

“This is not a complaint,” he says with a laugh, sitting in his office in the Dallas Design District. “My life is not my life. It’s now directed by the project. There are so many years that have gone into this.”

There were times, Edsel says, when his closest friends, many of whom live in his hometown of Dallas, would tell him to give up the cause — the obsession — of finding art looted by the Nazis during World War II.

“Some of my closest friends came up with this phrase that I should ‘declare victory’ and go home. They would say, ‘What exactly is the endgame?’” The endgame, he says, “is honoring these heroes and completing their mission by finding the remaining looted art.”

Edsel moved to Florence, Italy, in 1996. There, he developed a passion for art and architecture that energized a curiosity about monuments and esteemed works of art. He wanted to know how some survived the thievery and devastation of war, but also where unfound treasures might be hidden. What began as a question evolved, in his words, into a journey that by 2001 was a round-the-clock job.

He has since written three books on the subject, the first being the 2006 Rescuing Da Vinci: Hitler and the Nazis Stole Europe’s Great Art — America and the Allies Recovered It. He followed that with The Monuments Men and in 2013 released Saving Italy: The Race to Rescue a Nation’s Treasures From the Nazis. He also co-produced the 2006 documentary, The Rape of Europa.

He’s the founder and chairman of the Dallas-based Monuments Men Foundation for the Preservation of Art. In 2007, the foundation received the National Humanities Medal from President George W. Bush and has donated five albums of photographic evidence to the National Archives.

But the work goes on. Edsel urges anyone who might know the whereabouts of looted art to visit his website, monumentsmenfoundation.org, or call its toll-free number, 1-866-994-4278.

Underscoring Edsel’s concerns was Thursday’s demand by the World Jewish Congress that Germany make a stronger effort to identify and return thousands of looted art pieces the Nazis took from the Jews. The topic grew more heated in Germany and elsewhere after the recent discovery of more than 1,400 artworks in the Munich apartment of Cornelius Gurlitt, the son of a Nazi-era art dealer.

Anne-Marie O’Connor, who wrote about one of the most high-profile thefts committed by the Nazis, lauds Edsel for his ongoing commitment.

“Robert Edsel has done an amazing job popularizing the complicated history of Nazi-looted art,” says O’Connor, author of The Lady in Gold: The Extraordinary Tale of Gustav Klimt’s Masterpiece, Portrait of Adele Bloch-Bauer.

“The Munich art discovery shows how much unfinished business remains on the front, and Edsel, with his books and films, has helped to familiarize people with this lingering legacy of the Holocaust. He’s one of the new breed of historians who are taking art history out of the tweedy, elite realm of academics and acquainting a much broader audience with these issues.”

In recent years, Edsel set his sights on a feature film about the art experts dispatched during the war to rescue stolen art. “Because that’s the way we reach a worldwide global audience,” he says.

Besides, he says: “It’s such a visual story, such an exciting story. It seems impossible to believe that, 65 years after the most well-documented and photographed event in history, there’s an epic portion of World War II that most people knew nothing about.”

Edsel says he turned down at least three expressions of interest to get the partner he wanted — Clooney, who pulled off what he considers a remarkable feat in getting the picture made and released in 25 months, from the moment they signed the deal in late 2011.

Clooney, Edsel says, “thinks no small thoughts. He wasn’t intimidated by the bigness of it, the scope.”

Clooney and Heslov enlisted Edsel as a consultant on the screenplay, which did make modifications to the story, including changing most names. The filmmakers felt it necessary to embroider the characters with fictional flaws, for what Edsel calls “dramatic license purposes.” For example, the Hugh Bonneville character has a drinking problem. “So, if you have a Monuments officer who in real life had no drinking problem,” Edsel says, “and you’re going to give him a recovering-alcoholic opportunity to be rehabilitated by this mission, I think you’ve got to change his name.”

The names of Third Reich officers who enabled the plundering also were altered. Edsel says their children remain alive, and he saw no reason to tarnish their reputations by having their parents’ names used. Only the names of Adolf Hitler and Hermann Göring remain unchanged.

Pulitzer Prize-winning author Larry McMurtry once said that, of all his novels turned into films, he liked Terms of Endearment the most, because it held most closely to the spirit of the book. Edsel agrees. In filmmaking, it’s not the letter of the law, so to speak, that’s important. It’s the spirit, which is one of many reasons he loves Clooney’s movie.

“In this instance,” he says, “there’s so little known about the magnitude of this theft, and nothing about the Monuments’ officers. The burden on George and Grant was far greater. They only had two hours to tell the story. Given all those challenges, it’s a real achievement on their part in finding a way to tell it and in a way that audiences all over the world can embrace.”

Saving Italy: The Race to Rescue a Nation’s Treasures From the Nazis (2013)

The Rape of Europa, 2006 documentary

Contact the Dallas-based Monuments Men Foundation for the Preservation of Art online at monumentsmenfoundation.org or call 1-866-994-4278.