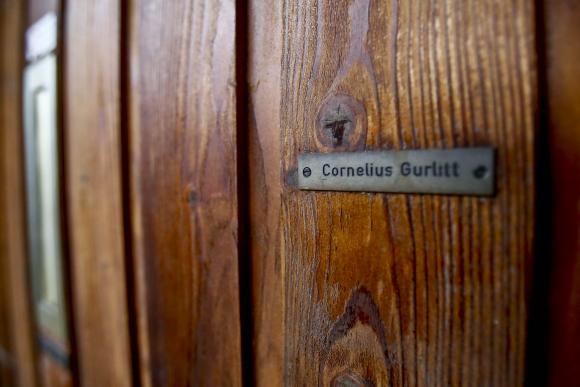 German museums are wilfully ignoring their duty to come clean about works they hold that were looted from Jews by the Nazis, the head of the World Jewish Congress said on Thursday, and the government must do more to force them to act.

Germany has faced heavy criticism over its handling of the discovery of 1,407 Nazi-plundered works in the flat of Cornelius Gurlitt, an elderly recluse whose father took orders from Hitler to buy and sell so-called 'degenerate art' to fund Nazi activities.

Since a magazine broke the story last November, debate over the rightful ownership of works stashed in the Munich apartment - including by masters such as Duerer, Delacroix, Picasso and Matisse - has grown into a wider controversy over thousands of paintings on open display in museums.

"They know what's been stolen," WJC President Ronald Lauder told Reuters in an interview during a visit to Berlin. "And what they've been doing is turning a blind eye."

Lauder, an honorary chairman of the board of trustees of New York's Museum of Modern Art, said the discovery of the Gurlitt trove should prompt a thorough examination of the provenance of works in public collections.

He said Germany had not addressed the culpability of museums, where the Jewish Claims Conference estimates 20,000 looted items are still on display.

According to a 2012 survey by the Institute for Museum Research in Berlin, more than 2,000 registered German museums hold objects created before 1945 but acquired after 1933 - the official definition for property suspected of having been extorted by the Nazis.

Though not every work acquired in this time frame was necessarily attained through Nazi persecution, only 285 museums - less than 5 percent of all those registered in Germany - have researched the ownership history of such collections.

"The truth is, we all know there is a large amount of art in museums which was either looted or sold under questionable circumstances," said Deidre Berger, director of the American Jewish Council's Berlin office.

"At the very least, these works need to be researched," she told Reuters in a telephone interview.

"This is an issue of great ethical and moral importance in our understanding of the Holocaust and German history."

Asked about the criticisms, Uwe Hartmann, head of the German national museums' Office for Provenance Investigation and Research in Berlin, agreed that not enough had been done about looted art historically but said Germany was now moving forward.

Germany was one of 44 countries that signed the "Washington Principles" in 1998 providing guidelines for the location, identification and restitution of artworks looted by the Nazis.

But Jewish leaders would like it to create a clearer legal framework via a federal commission, as well as providing federal funding for museums for the painstaking research that goes into screening works with suspicious origins.

Berger has also proposed a certification system to verify collections that are free of looted art, which could give museums an incentive to examine their collections.

Even Hannes Hartung, Gurlitt's lawyer, who recently announced his client's readiness to discuss claims, observed that some German museums are "very reluctant to restitute looted art".

"If a museum is asking for restitution, they should deliver on the other side," Hartung told Reuters by phone from Munich.

German authorities, keen to make amends and make details of the Gurlitt collection public to help families who might have a claim, has set up a "Schwabing Art Trove" task force, named after the Munich district where Gurlitt lived.

The 13 art and legal experts from Germany, Austria, France, Hungary, Israel and the United States are led by Ingeborg Berggreen-Merkel, Germany's former deputy state minister for culture. She said the team's international profile would help "guarantee that our work is objective and of high quality".

Munich lies in the state of Bavaria, which has drafted a "Cultural Restitution Law" to facilitate the return of Nazi-looted property by excluding such items from a 30-year statute of limitations. The national parliament will consider whether to apply this at the federal level next month.

Controversially, the proposal hinges on a "bad faith" clause, requiring proof from victims that the current owner is aware of the item's dark history. But Berger said the burden of proof should not rest on the victims.

Current owners had an ethical imperative to know the origins of their property, she said. "Simply saying 'Well, no one told me' is not good enough."