Loot No Longer: A Reporter in France Helps to Return Art Taken by the Nazis 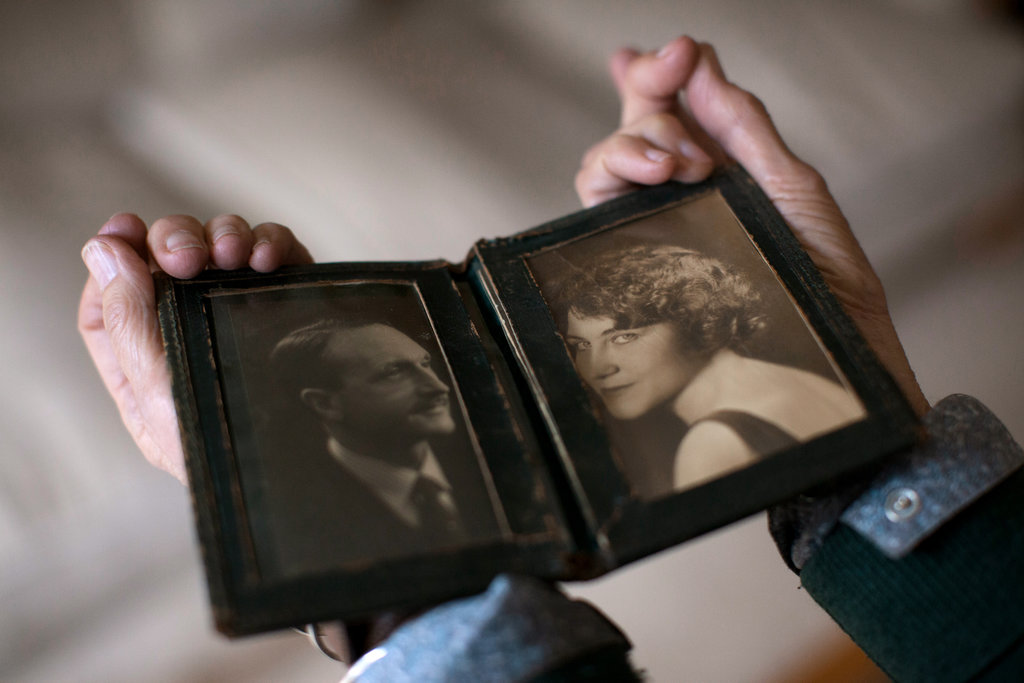 Nemours and Yvonne Tuffier, whose family was connected with the Rubens Triptych “The Erection of the Cross.”

PARIS — I worked nights from a leather chair in my living room, armed with an iPad, a telephone and a notebook. My mission was to see if I could reconnect Jewish families and others with fine art pillaged from their relatives during World War II.

I have no degree in art history or particularly detailed knowledge of the Holocaust. My experience with genealogy is that of an amateur, one who traced my own family to 15th-century Spain.

But as a reporter, I track people for a living. And I was intrigued by the difficulties that French authorities report having as they try to find the heirs to more than 2,000 unclaimed works of art looted or sold under murky circumstances during the war and now held in French museums.

Over the past 60 years, the French have returned just 80 of the so-called orphaned works of art. The rest, some of them masterpieces, sit or hang in 57 French museums, which are their guardians until the rightful owners can be found.

Critics complain that the effort to find heirs has been sluggish and inefficient, despite increased online genealogy resources and the rise of social media.

So I decided to see if I could trace the ownership of any of the works.

Like the French government, I was handicapped by the fact that many families do not even know what they have lost. With the tumult of war and the passage of time, families lose track of their possessions. Relatives die. Their histories, stories and documents all vanish.

So it is that a large painting by Gustave Courbet can hang in the Impressionist section of the Musée d’Orsay here. Though it is viewed as orphaned, no one has come forward to claim it. Until now.

The painting, a view of the chalky cliffs of Étretat in Normandy on a wet summer day, is the poster photograph on a government website that explains and catalogs the orphaned works. It took me two weeks to find one of its likely owners, a descendant of a Jewish émigré from Russia and her husband who consigned the Courbet painting for sale before they were arrested and deported to Auschwitz, where the childless couple died. Since I contacted a relative, alerting her to what I had found, she has filed a claim.

Then I started studying more orphaned paintings. The possible heirs of two other works took longer to find. One was an Albrecht Dürer chalk drawing from Hermann Goering’s collection of looted art. It once belonged to a French Resistance fighter, Gabrielle Tuffier, who was deported in 1943 after the Gestapo arrested her for clandestinely transmitting radio signals from a castle in the north of France.

Her brother, Nemours, owned the other work I tracked, a golden-hued triptych of Christ on the cross that had been painted by Rubens. It was apparently sold under duress during the Nazi occupation of France and recovered after the war from Linz, Austria, where it had been stored, awaiting display in a museum Hitler planned.

When I found Nemours Tuffier’s grandson, Roland Nemours Tuffier, in a town just outside Paris, I told him the Rubens now hangs on the second floor of the Louvre. He said he did not know his relatives had once owned it.

To be candid, I had help. His name is Gilad Japhet, and he’s chief executive of MyHeritage.com, a large social networking site for family trees. When I was stumped by errors in family history, name changes, misspellings, faulty years and false matches, he routinely bailed me out.

But there was nothing magical about what we did. We searched online family trees and Auschwitz death records, digital databases in Israel for Holocaust victims, and the photo catalog of the Bibliothèque Nationale. The French state’s own catalog of the works offered starting clues, with brief summaries of the history of paintings through the 1940s.

“There is really a wealth of information if you are trying to solve a mystery,” Mr. Japhet said. “I can only say it’s not difficult, and everyone can do it.”

Since 1950, the French have tried, in fits and starts, to reconnect the art with its owners. In 1996, information about many of the lost works was posted online and replaced in 2004 by a much more detailed inventory. In 2008, France sponsored an exhibition in Israel of 53 of the orphaned works.

Critics, though, have long said that the French have largely waited for possible heirs to show up instead of aggressively tracking them. Last year, Culture Minister Aurélie Filippetti said the French would become more proactive and appointed a group to establish the origins of looted art. In January, she announced the planned return of three works on which people had made claims, including a 17th-century landscape by Joos de Momper.

“After six months of work,” the ministry said in an email that noted the difficulties of its additional research, “it seems possible to identify the origin of 20 objects, even if these clues are only working hypotheses.”

Ministry personnel would not identify the other objects. But they told me one was not the Courbet seaside landscape, whose likely heir, Sylvie Tafani, I found last fall. She is the grandniece of Marc Wolfson, who is listed in the French records as the onetime owner of the Courbet. He and his wife, Ernestine Davidoff, were part of an elite circle of expatriates from Russia who were in Paris, a bustling hub of the art world, when German forces arrived.

Many Jews, fearful of property confiscations, sold artworks under duress at discount prices. Mr. Wolfson consigned his Courbet to a dealer in 1941 who in turn sold it for 350,000 francs to the Folkwang Museum in Germany, from which it was recovered. The records do not say what Mr. Wolfson made from that transaction. But they said he had been arrested in July 1942 and died after deportation. Then the trail in the French records went cold.

I guessed Mr. Wolfson might have been sent to Auschwitz and tracked down records from that camp that confirmed my hunch. He had died there, a few weeks after his arrest.

My genealogy detective, Mr. Japhet, then had the idea of looking for relatives on the tribute pages posted by Yad Vashem, the Holocaust memorial website. There he found a posting from 1988 by Mrs. Tafani that listed her name and her address in the south of France. Alas, she no longer lived there, I found, but someone by that name was listed as a board member of a French charity. I called it, and the charity gave me her email address.

When I reached her, Mrs. Tafani, 61, said she knew nothing about Courbet’s painting, “The Étretat Cliffs After the Storm.” Her mother, she said, was so scarred by the war — she escaped deportation as a child only because she was hidden by the family — that she baptized her children as Protestant.

“It was not until I was 15 years old,” she said, “that I learned that we were Jewish because my mother had such fear. It’s complicated. And so I tried to avoid asking questions that could make her cry.”

Finding the Tuffiers and the other paintings followed a similar path. The French records indicated that the Rubens triptych, “The Erection of the Cross,” had been sold, likely under duress, in 1941 by a “N. Tuffier,” the son of a prominent French surgeon, Theodore Tuffier, from whom he had inherited it. An online newspaper obituary and family trees led me to find that the son was named Nemours Tuffier, that he had a sister, Gabrielle, and that they had a number of descendants who lived near Paris.

Online searches pointed me to Roland Nemours Tuffier, the grandson of Nemours, who operates a company that sells yachts in the south of France. Mr. Tuffier, 52, said he is now preparing a claim with a cousin, Richard Nemours Tuffier, and that he was both happy and angered by the news he may be an heir.

“How come they have done nothing to find the rightful owners?” he asked of the French government. “We have people who are alive. Why can’t they just follow the birth certificates?”

Once he knew what to look for, Mr. Tuffier said he found family inventories of the works they once owned. He provided me with a copy, and the Rubens was listed on it, as was the Dürer drawing. He said his cousin recalled the family discussing that a trove of art had been lost in a fire. Allied records indeed show that a group of Tuffier paintings were confiscated by German soldiers from a castle where they had been hidden before it was torched. But the family did not know what art had survived.

The law in France typically recognizes the inheritance rights of extended heirs in cases where property has not been transferred under the terms of a will, as is the case here with Mr. Tuffier, a grandson.

Officials at the Louvre and Musée d’Orsay referred questions about the three paintings I tracked to the Culture Ministry. The ministry said the French are now more aggressively tracking descendants and have assigned 15 museum officials and archivists to the task. New curators will receive additional training in how to research the history of the orphaned works, the culture minister, Ms. Filippetti, told me in an interview, and she expects progress soon.

“We can’t say today or 2014,” she said. But she continued: “There is no French omerta to refuse to return the paintings. On the contrary, I am committed to move faster and further.”

When I told one of Ms. Filippetti’s advisers about my finds, he said the process can be more difficult for state researchers because they have to track and verify the legal standing of every potential heir, not just one or two.

And to be fair, many searches would be more difficult than the ones I attempted. I had the luxury of skipping paintings for which there were no clues in the French records — which is true of some of them. I concentrated instead on those that listed some name, partial or full, for a prior owner.

Even here, I met with failure. Several times, I found what I thought were the families listed in the records only to be proved wrong, or to encounter people with no interest in pursuing whether they were indeed related and heirs to a masterwork.

“My mother is certain that her uncle was not looted,” said a Parisian woman whose relative, a Jewish art dealer, appeared to have owned a Georges Seurat landscape that is listed among the orphans. “In any case, she has no documents concerning this question.”

But the success I did have bodes well for the French as they go forward with a more vigorous effort. Even when I faltered, Mr. Japhet, who was my cheerleader as well as my helper, remained enthusiastic about the ability of such research to right some very old wrongs.

“All you need is a lot of curiosity,” he said, “a little bit of intellect, and some luck.”