BERLIN—The son of a Nazi-era art dealer whose vast trove of art has been in legal limbo since it was seized by German prosecutors two years ago has for the first time signaled his willingness to return pieces that may have been looted from Jews. 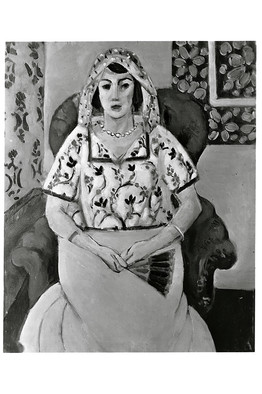 'Woman with a Fan,' a 1923 Matisse oil painting, is considered the showpiece out of 1,400 works seized in 2012 from a Munich apartment. Paul Rosenberg Archive

While the willingness to negotiate marks a sharp change in Mr. Gurlitt's previous refusal to consider any returns, the potential for continued clashes with families seeking restitution appeared far from over.

Mr. Hartung said that out of the more than 1,400 pieces in the collection, "very few" could be characterized as looted. German officials have said previously that the figure could reach into the hundreds.

"There are very few cases that could even possibly be looted art," Mr. Hartung said in a telephone interview. "But we are trying hard to find fair solutions for looted works in accordance with the Washington Principles," he said, referring to international guidelines that Germany signed in 1998.

The reclusive Mr. Gurlitt told the German weekly Der Spiegel in November, shortly after the existence of his art trove was revealed publicly, that he wouldn't return anything. "I will not speak with them, and I won't freely give anything back, no, no," he was quoted as saying, referring to the heirs of past owners.

Mr. Gurlitt didn't have a lawyer at the time, and has not spoken publicly since. Mr. Hartung, who signed on in December, acknowledged that his client had been opposed to restitution, but didn't elaborate on why he had shifted his position.

Under German law, any sale between 1933 and 1945 from a Jew to a non-Jew is considered to have been made under duress unless it can be proved that the purchaser paid a fair market price and wasn't affiliated with the Nazis.

A government-appointed task force is researching the provenance of around 500 in the Gurlitt collection that might fall under the scope of that law, but it has no power to require restitution. Because the statute of limitations has expired, Mr. Gurlitt isn't compelled to return any looted artworks.

Meanwhile, lawyers for some claimants have raised concerns that improper storage could be impairing the value of the pieces, which were confiscated by Bavarian authorities in early 2012 from Mr. Gurlitt's Munich apartment.

Because of these and other concerns, the lawyers said they decided to approach Mr. Hartung instead of further lobbying the German government to intervene.

One of them is Christopher Marinello, a lawyer representing the family of the late French art dealer Paul Rosenberg, whose collection was largely lost to Nazi plundering.

"Anything short of complete restitution without monetary compensation will be unacceptable to the Rosenberg family," Mr. Marinello said.

One of the paintings that belonged to Mr. Rosenberg, "Woman with a Fan," a 1923 oil on canvas by Henri Matisse, is the showpiece of the Gurlitt collection. Nazi party records show that it was taken in a Nazi-authorized raid on a bank vault in southwestern France.

Jörg Rosbach, a lawyer representing another family with a claim to a Max Liebermann painting, said he also approached Mr. Gurlitt's legal team.

Private dealers value the Matisse at around $6 million to $8 million, a figure that they say could rise to $20 million at auction, given the attention caused by the Gurlitt case. If in good condition, the Liebermann painting, "Two Riders on the Beach," could fetch or eclipse the artist's record of $3.8 million.

Yet hopes for such prices would be shattered if the paintings were damaged.

Mr. Gurlitt's collection consists of works on paper and oil paintings, which can deteriorate if not stored under appropriate temperature and humidity conditions. The works on paper must be wrapped individually in sterile tissue paper away from sunlight, according to David Lewis, an art historian and founder of the Commission for Looted Art in Europe, a nonprofit research center in London.

A spokesman for the Augsburg prosecutor's office, which handles Mr. Gurlitt's case, said the works were "not in a basement." He said they weren't exposed to direct sunlight and the storage area was temperature-controlled.

Mr. Gurlitt, who kept the work hidden in his apartment for decades, didn't store them under museum-standard conditions.

The Matisse is particularly vulnerable: Photos taken by German authorities show that the painting, unlike the Liebermann, isn't on a stretcher, the wooden frame that artists wrap canvas over to prevent paint from peeling or buckling, says Mr. Lewis.

Mr. Marinello wrote to the prosecutor's office on Monday requesting that the work be stretched and asking whether it was being properly stored.

His request was forwarded to Ingeborg Berggreen-Merkel, a respected academic and the head of a task force appointed by the prosecutor to determine the art's provenance. Ms. Berggreen-Merkel promised to respond within a few days, Mr. Marinello said.

A spokesman for Ms. Berggreen-Merkel didn't respond to requests for comment. The prosecutor's office declined to comment on specific works of art. Germany's Culture Ministry didn't respond to emails and calls requesting comment.

"It is possible everything has been properly stored, but then why wouldn't the prosecutor's office or task force just say that?" says Mr. Marinello.

Bavarian authorities confiscated the art from Mr. Gurlitt, now 81 years old, in early 2012 as part of a tax investigation.

They didn't disclose the find publicly, in violation of the Washington Principles, until the German magazine "Focus" reported on the find in November. The delay was criticized by art experts and U.S. and Israeli officials.

German authorities said they were constrained by confidentiality rules surrounding the tax case, and noted that the principles aren't legally binding.