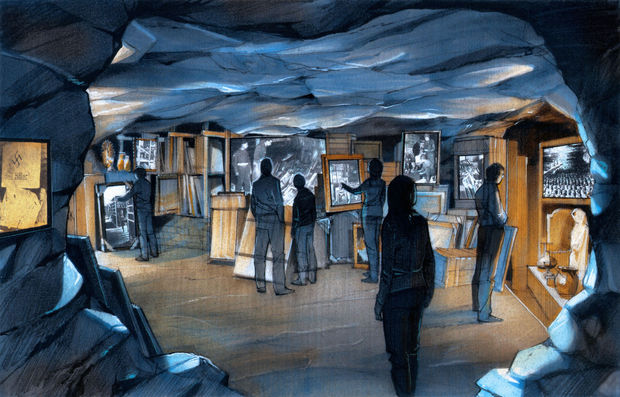 Monuments Men Exhibit Rendering courtesy of the WWII Museum. The gallery, which is slated for opening in 2016, will highlight the story of the men and women who saved cultural treasures from Nazi destruction and will be located in The National WWII Museum’s upcoming Liberation Pavilion. "The Monuments Men," were museum curators and other art experts from 13 nations. The gallery will feature the experience of an Austrian salt mine where the the Monuments Men recovered priceless works of art. The gallery will also highlight special wartime measures taken to locate and rescue masterpieces by Leonardo da Vinci, Raphael, Michelangelo and hundreds of thousands of other stolen art pieces.

The work of the men and women who recovered thousands of artworks that Nazis had stolen and hidden during World War II will be commemorated in a gallery at the National World War II Museum in New Orleans.

The 1,700-square-foot exhibit space will be in the Liberation Pavilion. That building – the last exhibit pavilion to be built in the museum’s Warehouse District complex – is expected to be open late in 2016, Gordon “Nick” Mueller, the museum’s president and chief executive officer, said Thursday (Jan. 23).

The pavilion’s design was altered to make room for the gallery, Mueller said. It will resemble a salt mine because German soldiers used such caverns to stash the priceless art they had looted. Although the masterworks will not be on display, touch screens will let visitors see the art that was pilfered.

Videotaped interviews with surviving members of the group known as the Monuments Men may be included, said Robert Edsel, author of the book, “The Monuments Men: Allied Heroes, Nazi Thieves and the Greatest Treasure Hunt in History.”

The book looks at the group of slightly more than 100 museum curators, art historians and artists who worked, often under fire, to track down the looted art. Two Monuments Men were killed, Edsel said, and many pieces of art – no one knows how many – are even today still missing.

Edsel’s book inspired the movie “The Monuments Men,” which is set to open Feb. 7. George Clooney directed the film and stars in it, along with Matt Damon, John Goodman, Cate Blanchett, Bill Murray and Jean Dujardin.

Telling this team’s story is “a very emotional, very important part of World War II,” Edsel said. “We are living with the altered cultural legacy of things that were destroyed and things lost and still missing.”