Relatives of Ronald Balfour are angry that The Monuments Men overlooks the British historian, one of only two members of the unit killed in the second world war 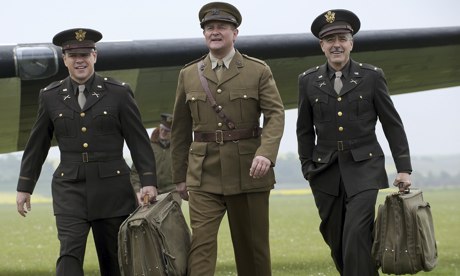 Nearly 70 years after his death on the battle front protecting works of art, the extraordinary and largely untold story of Ronald Balfour – a shy but extremely brave Cambridge academic who is honoured in Germany but forgotten in his own country – is beginning to emerge.

But with a major George Clooney film based on the work of a specialist unit devoted to saving art and heritage out next month, the few remaining people who have close links to one of Britain's least likely heroes fear that the true story of an unjustly overlooked champion of cultural history has been edited out in order to make good adventure cinema.

Ronald Edmund Balfour, a short-sighted, rake-thin medieval historian and fellow of King's College, Cambridge, was in his forties when he volunteered for a new unit comprising civilian art, museums and heritage experts set up to work alongside Allied forces after D-day. It was charged with saving paintings, statues, ancient buildings, historic documents and libraries from theft or destruction by the Nazis.

The unit, the monuments, fine arts and archives (MFAA) section of the Supreme Headquarters Allied Expeditionary Force, was dubbed "the Venus fixers" by battle-hardened troops bemused at being urged to respect cultural treasures.

The film The Monuments Men, directed and partly written by George Clooney, focuses on the adventures of a group of MFAA officers from after D-day until the end of the war. The film stars Clooney, Matt Damon, Bill Murray, John Goodman and Cate Blanchett, is based on a book by US writer Robert Edsel and is due for UK release next month.

Ronald Balfour's life was complex and intriguing. His acquaintances probably included art historian Anthony Blunt, who spied for the Soviet Union, and other academics linked to the Cambridge Apostles group, EM Forster and perhaps Churchill's close friend and adviser, Brendan Bracken. But he has little to offer mainstream war film-makers. Unmarried and possibly gay, Eton-educated Balfour was devoted to academic study and tipped to be a future provost of King's. He amassed a library of more than 8,000 books, which he left to the college.

Though American-led, the MFAA was an international effort, with about 345 men and women from up to 17 nations. Britain provided the second-largest group of specialists. Volunteers for MFAA work in the war zone were given basic military training, a uniform and an officer rank – and a sector of Europe to look after.

The final months of the war in Europe brought its greatest loss of life – a mud-and-fire maelstrom in which armed gangs roamed at will.

Amid this chaos around a dozen frontline MFAA officers struggled to preserve Europe's cultural wealth. Balfour, who was given the rank of major and attached to the Canadian army, was entrusted with the sector that included northern France, Belgium and north-west Germany – hundreds of key sites, and thousands of works of art and historic architecture.

Often, Balfour had to hitchhike from one war-ravaged historic site to another, inspecting losses and damage. But his passion for art and heritage ended up by costing him his life. Early in 1945, Balfour was at Cleves, the bitterly contested ancient city in north-western Germany.

He had just saved an archive dating back to the 14th century, and persuaded Canadian troops not to dynamite the medieval Steintor city gate at nearby Goch.On 10 March Balfour ventured beyond allied lines with two German civilians to try to protect historic church artefacts and was killed by a shell burst while moving parts of a medieval altarpiece to safety. He was 41, one of two MFAA officers killed during the war. Walter Huchthausen, an American architect, was shot near Aachen in April 1945.

Ronald Balfour, the British historian who was one of 'the monument men'. Photograph: Courtesy of the Provost and Fellows at King's College, Cambridge

Balfour was buried in the Reichswald forest war cemetery, near Cleves, and an archive room at King's is named in his honour. The college is custodian of most of his papers.

In Germany, Balfour has not been forgotten. For decades, flowers were left on his grave by a Cleves woman whose brother had been killed in the war. A local archive, then a street, were named in his honour. In 1985 Balfour's family accepted the prestigious German bravery award, the Johanna Sebus Medaille, on his behalf.

Balfour's descendants are dismayed that the film, though based on a history of the MFAA officers and featuring an English historian serving with the MFAA with the rank of major who worked on the frontline – as only Balfour did – has ignored the real hero.

"We were astounded when we heard that Hugh Bonneville was going to play the character we thought might be Ronald," says Polly Hutchison, one of Balfour's nieces. "He is so different."

Billed as "based on the true story of the greatest treasure hunt in history" – the search for art stolen by leading Nazis during the war, which is the film's central theme – the film's makers concede that they have "taken some liberties" with the characters for dramatic purposes. They say that there is no character in The Monuments Men called Ronald Balfour, and that the Bonneville character is entirely made up.

Last month, Clooney's film was criticised by an Austrian writer, Konrad Kramar, for crediting to MFAA officers the salvation of a vast horde of art stolen from across Europe. The art had been stored in Alpine salt mines at Altaussee in Austria and was targeted for destruction by Hitler in the last weeks of the war. In a new book, Kramar claims that it was the miners who removed explosive charges from the mines, with the Monuments Men arriving there nearly two weeks later.

"I feel that Ronald has now been twice unrecognised," said Hutchison. "First, that his own country has not recognised him, and then when there's a film, he's unrecognised again."

"There is a lot of family pride in what he did," said niece Virginia Cardwell Moore. "He was brilliant, and would have had a great future. But after 1945 Ronald was overlooked. But in the family we've talked about him all our lives."

"He's a family legend, if you like," said another niece, Delphie Stockwell. "Often it's hard to work out what he was doing, and who for, even before his monuments work started."

In 2007, the US Senate passed a resolution recognising the work of the officers of the MFAA, and last month their importance – and the looming film – led to the award of a Congressional gold medal.

Germans find it strange that Balfour's bravery and his achievements have not been recognised by a British government. "Here he saved the last great medieval building standing," said local resident Paul-Gerhard Küsters. "Cleves was 97% destroyed in the war, but Ronald Balfour saved archives and buildings here. It is a pity that the English do not know about him."