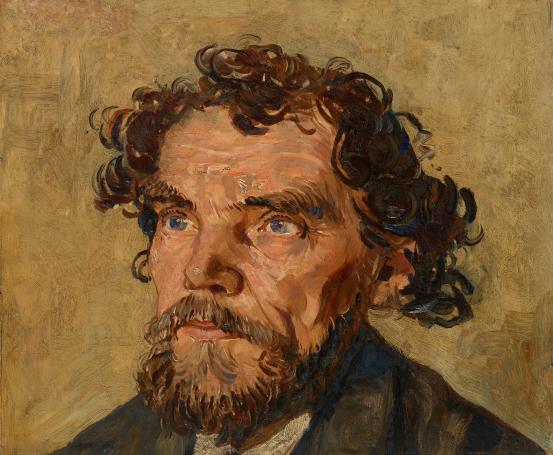 The National Gallery of Victoria's Head of a Man, wrongly attributed to Vincent van Gogh.

THE National Gallery of Victoria will this week receive a claim for its infamous Head of a Man portrait, the painting which for 67 years until 2007 was thought to be one of only two van Goghs in an Australian public collection.

The gallery will receive a letter within days from the estate of the painting's original owner, Richard Semmel, who sold it under duress during the rise of the Nazis in the 1930s.

The picture, which has been in the gallery's collection since 1940, was recently rehung at Melbourne's NGV International after having been off display for 3 1/2 years during which researchers looked further into its history following the declaration by experts at Amsterdam's Van Gogh Museum that it was not produced by the Dutch master.

The NGV accepted the decision but continued research into the painting's creator and its ownership history.

"The main reason we took it off display was to take the back off to see if there was information (there)," NGV assistant director Isobel Crombie said.

Artworks can often contain concealed notes, labels or markings, providing clues as to the artist or provenance, but Ms Crombie said removing the back did not reveal any clues.

Researchers did discover Head of a Man had been owned until 1933 by wealthy Jewish industrialist Semmel, who sold it under duress following the Nazi occupation of Germany. After The Australian reported this discovery in August, the Switzerland-based lawyer for the heirs to Semmel's estate, two sisters living in South Africa, contacted the NGV.

Australia is a signatory to the Washington Principles, the international conventions governing the return of art or significant belongings confiscated or sold under duress due to Nazi occupation. The Semmel heirs' lawyer, Olaf Ossman, does not entirely accept the Van Gogh Museum's finding that Head of a Man was not painted by van Gogh. Mr Ossman said returning Head of a Man to public display "shows us that also the museum believes in the genuineness of the painting and its provenance".

Ms Crombie denied this and said Head of a Man was "back on display because it is a work we value in the collection".

Research into its history is continuing.