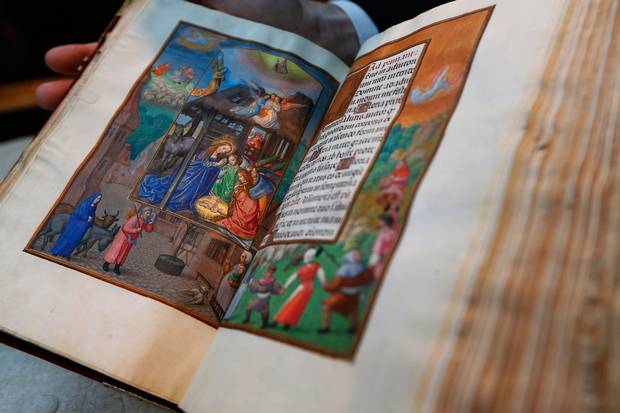 Just under 10 inches high and seven across, the small book sits humbly in a glass case surrounded by the grand Old Master paintings due to be auctioned at Christie's in St James's. But precious things do come in small packages.

The so-called Rothschild Prayerbook, a sumptuously illuminated Book of Hours created c.1505 in Ghent or Bruges, sold to a private buyer in 1999 for $13.4m. On 29 January, it will go under the hammer again in New York after a world tour that will take in branches of the auction house in Moscow and Hong Kong. If it exceeds the estimate of $12-18m, this little volume will count as the world's most expensive book – if you exclude the $30m Bill Gates paid for a Leonardo notebook, the "Codex Leicester".

The 67 full-page miniatures depict scenes from the Bible with radiant colour and delicious detail. As for the lavishly illustrated borders, droll episodes of peasant life intertwine with lovingly rendered plants, fruit and flowers. Fabrics, foliage and gestures come to life with a wit and flair that looks forward to Dutch and Flemish domestic realism as well as back to the devotional rapture of the later Middle Ages. The dancing shepherds of a Nativity sequence are a particular seasonal highlight.

Who painted this lovely prayerbook? The Netherlandish artist Gerard David executed some of the miniatures, as did the father-and-son team of Alexander and Simon Bening. Much of the work, though, was undertaken by the star illuminator Gerard Horenbout, the court painter to Margaret of Austria, Regent of the Netherlands. Horenbout later came to England to work at the court of Henry VIII along with his son and daughter Lucas and Susanna, both painters of note themselves.

In the words of Nicholas Hall, international co-chairman for Old Masters at Christie's, the Rothschild Prayerbook represents "one of the most prestigious and exquisite examples of Flemish manuscript illumination". However, the volume's provenance involves the history of another family apart from the talented Horenbouts. It formed part of the art collection of the Vienna branch of the Rothschild banking dynasty. Gathered in the 19th century by the childless Ferdinand and Nathaniel, these works passed to the three children of their brother Albert. Among them was Alphonse de Rothschild and his English-born wife, Clarice Sebag-Montefiore.

In 1938, the Prayerbook and the rest of the artworks inherited by Alphonse and Clarice became early victims of the Nazi policy of plunder and expropriation. The Nazis would strip Jewish families across Europe of all they owned before they went on (in millions of cases) to rob them of their lives as well. Anne Webber, founder and co-chair of the Commission for Looted Art in Europe, explains: "When the Nazis took over in Vienna in March 1938, they immediately confiscated the Rothschild collections, which were earmarked for Hitler's personal art reserve, the Führervorbehalt. At the end of the war, the Allies found them stored in the Altaussee salt mines in Austria."

After the war, the Rothschilds – who had fled to safety – did not return to their Vienna homes, which had been occupied by the Gestapo. But, says Webber, they "requested the return of the art collection. The Austrian government forced the family to 'donate' one third of it to Austria in order to be able to take the rest abroad." There matters rested until, in the mid-1990s, the unfinished business of Nazi loot rose up the diplomatic agenda. One conference was convened in London by foreign secretary Robin Cook. "By 1998, there was a lot of pressure on Austria, and so they created an art restitution law."

Alphonse and Clarice's daughter Bettina Looram tried once more to reclaim her stolen property. Convalescing in hospital, Bettina – who had married a US diplomat, and died late last year – thought: "I wonder whether it's worth having a go". It was. The Rothschild collection, including the Prayerbook as well as paintings by Frans Hals, came back to heirs who by then owned no grand houses to host them. Hence the sale in 1999, when Christie's rather generously chose to describe the restitution of the proceeds of violent robbery after 60 years as "a tribute to the enlightened attitude of [Austria's] present government".

"Since the law was passed," Anne Webber reports, "the Austrians have restored over 30,000 items from federal museums alone, which gives an indication of how much looted property there has been in Austria, and how much remains to be restored." Christie's says that the beautiful book due to be auctioned next month has an "illustrious provenance". It also has a tragic one. Although they wanted to return, the Vienna Rothschilds could not bear to reoccupy their Gestapo-squatted homes. One of the reasons was that was that Bettina found bloodstains on the walls of her old nursery.