The Cézanne paintings' escape to safety 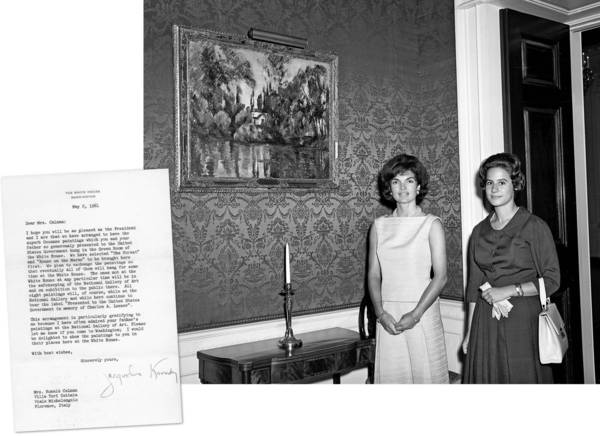 The surprise restitution last week of a major Baroque masterpiece looted by the Nazis in 1944 was a stunning finale to a remarkable story. Missing for more than six decades, the bravura painting "Saint Catherine of Alexandria" by Bernardo Strozzi (1581-1644) had been tied up in Italian courts for almost five years.

But the sudden return to its rightful owner in Los Angeles also raised a provocative question. The extensive art collection in Florence, Italy, from which the painting had been stolen included 15 canvases by Paul Cézanne, the celebrated French Post-Impressionist commonly regarded as the father of Modern art. As I wrote in a story in September, eight of those Cézanne paintings were bequeathed to "the President of the United States and his successors in office" — paintings that arrived in Washington from Europe in 1951.

The question is: How did the White House Cézannes escape the Nazi plunder that captured the Strozzi?

The answer must remain speculative. The American expatriate family of Charles A. Loeser, whose art was stolen, has a sole surviving member, and she was just a small child when the German Wehrmacht swept into Florence for its yearlong occupation. Philippa Calnan, who plans to donate the Strozzi to the Los Angeles County Museum of Art, where she once worked, says that her late parents were reluctant to discuss wartime details. For those who survived the traumatic events of World War II, such hesitation is not uncommon.

Hitler's regime did notoriously condemn Modern avant-garde art like Cézanne's as "degenerate." It was said to represent the moral decay that National Socialism claimed was responsible for Germany's grinding economic troubles. But that official taint is probably not what saved the Cézannes from greedy looters.

Modern art's usefulness as a propaganda tool for Nazi condemnation didn't stop thieves elsewhere from snatching valuable works by Picasso, Matisse and other Modern masters. About 380 Nazi-confiscated Modern works once reviled as degenerate are among the huge cache of prints and drawings, plus some paintings, revealed a few weeks ago in a run-down Munich apartment. A Cézanne sketch of a fisherman is among them.

Instead, something else probably protected what became the White House Cézannes — something inadvertent and, it turns out, profoundly ironic. Italy's controversial cultural heritage laws opened an escape route that the Modern masterpieces could slip through.

Cultural heritage laws are intended to regulate the sale, export or restoration of any property with artistic value. In Italy, a long history of invading armies, tomb robbers, civic upheaval and even the simple modernization of cities put at risk works of art produced over thousands of years. Italian patrimony laws are today especially strong — some might even say draconian.

The law was first codified in 1909. The statute placed under government protection "all manner of things movable or immovable" that are at least 50 years old and "of historical, archaeological, paleo-anthropological interest." No work of art fitting the description could leave the country without permission.

Loeser, in exchange for his 1928 bequest of 30 Renaissance works to the city of Florence, had negotiated for his heirs blanket government authorization to export at their convenience the remaining art in his collection.

Yet, as the storm cloud of a world war gathered and finally broke a decade later, a Jewish American family living in Italy could hardly have gotten the necessary documents to take medieval, Renaissance and Old Master paintings out of the country.

Desperate to protect the art, the family hid a dozen Loeser works in the Abbey of San Mercuriale, a monastery 70 miles away in the small city of Forli, south of Ravenna and near the Adriatic Sea coast. Among them were paintings attributed to El Greco, Bernardo Daddi, Joos van Cleve and William Hogarth.

The Strozzi painting, rather large at nearly 51/2 feet tall, apparently remained behind in the family's Florence villa. When the German army occupied the city, the Nazi prefect commandeered the house as his headquarters.

By fall 1943, Italy was reeling under an intense military campaign to expel German forces from hundreds of occupied cities and towns. Mussolini had been deposed and an armistice with the Allied powers signed. Amid fierce fighting that raged throughout the following year, the Wehrmacht steadily retreated.

The Strozzi vanished in the chaos. So did the paintings hidden in Forli.

One of those missing paintings — an exquisite, portable altarpiece painted in Siena at the end of the 14th century — turned up on the art market last year and was retrieved. It is now on loan to LACMA, together with the newly returned Strozzi. The rest remain lost.

And what about the Cézanne paintings? How did they escape?