What next for the Gurlitt treasures? 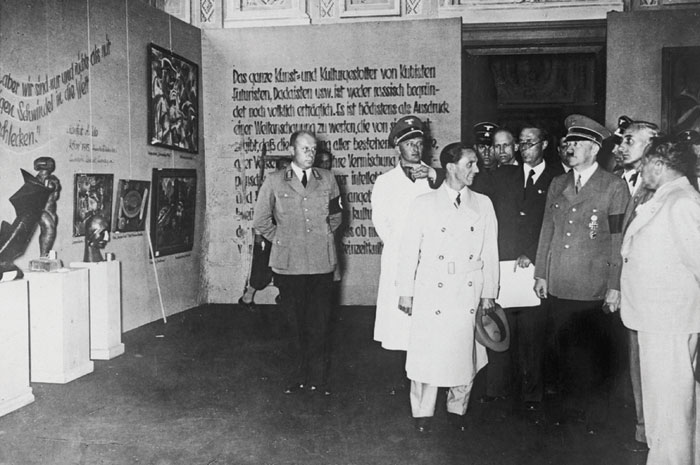 Forbidden pleasures: Hitler, Goebbels and other senior Nazis at the “Entartete Kunst” exhibition in Munich in 1937

The news hit like a bomb. When it came to light that German Customs investigators had seized around 1,400 Modern works of art from an inconspicuous Munich apartment, and that the tenant was 80-year-old Cornelius Gurlitt, the son of Hildebrand Gurlitt, a Hamburg dealer privileged under the Nazi regime, the news threw the international art world into turmoil. Surely this art could only have been stolen from Jewish owners or condemned as “degenerate” by the Nazis and confiscated from German museums?

The reality is not so simple. Some of the pieces, the majority of which are works on paper, were certainly seized from individuals and museums in the Nazi era. After the works were confiscated on 28 February 2012—not, as initial reports suggested, a year earlier—the Berlin-based provenance researcher Meike Hoffmann was commissioned by the public prosecutor in Augsburg to inspect the collection and, in the first instance, to determine the artists whose works were in Gurlitt’s possession.

At a press conference held after the surprise announcement of the Munich discovery, Hoffmann, who has been leading the projects of the “Degenerate Art” Research Centre at the Freie Universität Berlin since 2006, revealed that previously unknown works, such as a self-portrait by Otto Dix, were in the cache. But the collection also included pieces by the Biedermeier painter Carl Spitzweg and even the Venetian landscape painter Canaletto.

The public prosecutor’s silence surrounding the discovery of the hoard has caused massive protests. The prominent Berlin lawyer Peter Raue called his behaviour “incredible”. But it has all the hallmarks of the secrecy that is required during such an investigation. After all, at the time of going to press, Gurlitt had not been charged with any criminal offences.

Nevertheless, after the intervention of the Federal Chancellery and the state minister for culture, the authorities reluctantly decided to post 25 works, for which there is “reasonable suspicion of Nazi-related withdrawal”, on the online database lostart.de. These include Seated Woman, 1942, probably by Henri Matisse, which was taken by the Reichsleiter Rosenberg Taskforce (the Nazi art-theft organisation) from the bank vault of the Paris art dealer Paul Rosenberg and then “purchased” by Hildebrand Gurlitt from the Nazis in 1944, and Max Liebermann’s Riders on the Beach, 1901, from the collection of David Friedmann in Breslau (now Wroclaw).

According to Germany’s central office for the documentation of lost cultural property (the Koordinierungsstelle Magdeburg, which runs the Lost Art Database), 590 works are being investigated over the possibility of unlawful seizure from Jewish owners and 380 were branded “degenerate” by the Nazis and confiscated from museums. However, the affected institutions have no right to restitution.

The history of the remaining 430 works taken from Gurlitt’s flat is not quite as clear. Uwe Hartmann, the head of the institute for museum research at the Berlin State Museums, suggests that Hildebrand Gurlitt bought many of the works from Goebbels’s ministry of propaganda. “According to the legal situation at the time, he was the rightful owner [of these works],” Hartmann says. However, with public pressure mounting, the authorities decided to open the case.

Meanwhile, the Bavarian minister for culture called the secret tactics of the authorities “a disaster”. As we went to press, the authorities were planning to publish online the 590 works with questionable provenance, following a decision by the federal task force recently set up by the state minister for culture and led by Ingeborg Berggreen-Merkel, the former deputy minister of state for culture. This means that “potential claimants can now be quickly placed in a position to identify missing works and, where appropriate, make claims”, Berggreen-Merkel says. Representatives of all the German authorities are now involved in the task force, after it was criticised for initially appointing just one expert (Meike Hoffmann) to undertake provenance research.

Although the publication of a list of the Munich works could help to clarify heirs’ legitimate claims and to refute less justifiable requests, this step is legally problematic. If private collectors start worrying that their collections will be made public, the willingness to co-operate and thus to find a “fair and just solution” along the lines of the Washington Declaration of 3 December 1998—not mandatory for private individuals—will be compromised. It is important to reach an amicable solution with Gurlitt; this happened last year when he sold Beckmann’s Lion Tamer at auction and split the proceeds with the heirs of the original owner, the dealer Alfred Flechtheim.

Hildebrand, Gurlitt’s father, was certainly not blameless. He was one of the four dealers charged with “recycling” confiscated works by the propaganda minister, Joseph Goebbels, the driving force in the battle against “degenerate art”. There has been extensive research on the other three: Bernhard Böhmer, Karl Buchholz and Ferdinand Möller. Only Gurlitt’s activity has not been thoroughly explored. After the war, Gurlitt said that all of his business papers were destroyed in the bombing of Dresden in 1945. The Allied tribunal charged with “de-Nazification”, which, after 1945, considered how close to the Nazi regime a person had been before issuing any work permits, classified him as “less involved”, and he was able to continue his career.

Hildebrand Gurlitt (1895-1956) has an interesting biography. As the director of a museum in Zwickau, Saxony, from 1925, he bought contemporary art, mostly Expressionism, but it was so heavily attacked by the resurgent Nazis on the city council that he had to give up his post by 1930.

He then headed to the Hamburger Kunstverein, but in 1933 was branded “Jüdisch versippt” (married or related to Jewish people; one of his grandmothers was Jewish) and was dismissed. From then on, he worked as an art dealer. Because of his good contacts among Modern art collectors, his “non-Aryan” background was apparently forgotten, and he became one of the privileged art dealers appointed in 1937 to sell the confiscated art abroad. Later, he was also involved in purchases for the planned “Führer Museum” in Linz, Adolf Hitler’s Austrian “retirement home”, having been named “chief buyer” for the Paris market, and for the Reich Chancellery, buying tapestries and other goods for more than three million Reichsmarks in Paris as late as 1944. He was paid a commission on these transactions: it varied between 5% and 25% and earned him several hundred thousand Reichsmarks.

Gurlitt held on to many of the paintings and drawings that have now been seized from his son. Cornelius Gurlitt was born in 1933, making him 12 years old when the war ended, and he probably never knew the exact origin of the individual works. For the time being, we can only speculate about the motives behind such an extensive collection.

It may be that Hildebrand Gurlitt could not find enough wealthy buyers, even though the trade in “degenerate art” continued during the Third Reich. During that period, collectors such as Joseph Haubrich in Cologne and Bernhard Sprengel in Hanover built up their collections of Modern works condemned by the Nazis, even under the nose of the Gestapo. Unlike his colleague Möller, who kept Expressionist paintings for himself and deceived his Nazi employers about it, Gurlitt did not want to sell his holdings to the damaged museums after the war.

Two different categories of work can be found in Cornelius Gurlitt’s scandalous cache: first, the “degenerate art” that was removed from German museums by the Nazis and subsequently confiscated by law in 1938. This law was never abolished and still applies in today’s Federal Republic. The victorious Allies (specifically the US military government) and, later, the newly founded Federal Republic wanted to save private collectors and the art market from endless legal battles over works acquired during the Nazi regime. Even before 1945, much “degenerate art” made its way into museums and collections. The Museum of Modern Art in New York was able to acquire outstanding works formerly in the possession of German museums, as were the Solomon R. Guggenheim Museum and the Kunstmuseum Basel, the latter mainly at the infamous auction in Lucerne, Switzerland, on 30 June 1939.

The other works fall into the category of “stolen art”—treasures that were either stolen from their mainly Jewish owners or acquired through pressure and threats. So far, it is unclear how the works in Gurlitt’s possession came together: through purchase or exchange, lawfully or unlawfully, and whether they are owned or just held in trust. To determine this in individual cases will be hard, though no more difficult than in other restitution cases where German public museums are concerned. Hildebrand Gurlitt’s claim that his business papers had been destroyed turned out to be a lie: the documents were found in crates in his son’s apartment. Perhaps they will help to reconstruct the ownership history of individual pieces.

In cases where Cornelius Gurlitt cannot prove that he is the legal owner of the works in his possession, the pieces will probably go to the German state. The politicians involved, alarmed by fierce attacks from lawyers (both German and foreign), as well as museum specialists, have promised generous solutions in accordance with the Washington Declaration, and have suggested that they will waive the statutes of limitation usually applicable in civil cases.

Nevertheless, one cannot expect rapid progress. Gurlitt, a recluse who has never worked and made ends meet by occasionally selling individual works, told Der Spiegel last month that he wanted his paintings back. “I won’t voluntarily give back anything, no, no,” he told the German magazine. “When I’m dead, they can do with [the works] what they want.”

The art dealer Hildebrand Gurlitt in 1954