Dealers deny knowing Strozzi painting had been looted by Nazis 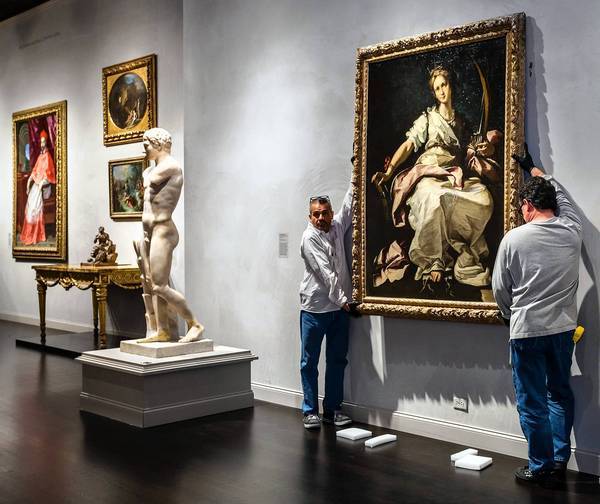 The art dealers in Milan, Italy, who offered for sale a major Baroque masterpiece painted by Bernardo Strozzi that had been looted by the Nazis in 1944 deny that they knew of its illicit past when they acquired the picture locally in 2006.

“When we purchased the work we were utterly unaware of its presence on Nazi looted art lists either in Germany or anywhere else,” wrote Marco Voena, responding in an email to an inquiry from the Los Angeles Times and speaking on behalf of himself and art dealer Fabrizio Moretti, with whom he bought Strozzi's “Saint Catherine of Alexandria” for resale. “If we had known, we would have immediately reported it to the appropriate authorities.”

On Monday “Saint Catherine of Alexandria” (circa 1615) was installed at the Los Angeles County Museum of Art, where the painting is a promised gift from the heir to whom the Italian court ordered the canvas returned. The painting, which shows the life-size figure of the saint seated next to the wheel on which her torture had been miraculously interrupted, is estimated to be worth between $2.5 million and $3 million.

Voena said that the pair had acquired the painting “in good faith” in 2006 from Open Care, a company in Milan that offers art-related services, including appraisals, storage and restoration. The price was 450,000 euros, the equivalent of about $611,000 today. The painting's status as looted art came to their attention three years later, he said, when the pair offered it for auction at Sotheby's salesroom in Milan.

Sotheby's identified the Strozzi painting as having been looted from the collection assembled in Florence by American expatriate Charles A. Loeser, a noted art collector whose bequests of paintings, sculptures and drawings are now housed in his adopted city's Palazzo Vecchio, Harvard University's Fogg Museum and the White House in Washington, D.C.

The auction house refused to accept the Strozzi painting and notified Italian police, as well as Loeser's granddaughter, Philippa Calnan, who lives in Los Angeles.

Voena said that the dealers' joint acquisition of the painting took place when “restitution issues were very much in their infancy. There may already have been such issues in Germany and the Netherlands and the northern countries generally, but Italy seemed to be completely out of the loop, presumably as very little looting had taken place in the first place.”

Voena added that he and Moretti expect to seek restitution of the purchase price and legal fees from Open Care.