By Melissa Eddy and Alison Smale

HALLE, Germany — Wolfgang Büche was amazed this month when a watercolor seized by the Nazis from the small museum in this eastern city, where he is the curator, reappeared, part of a vast trove uncovered in a Munich apartment. 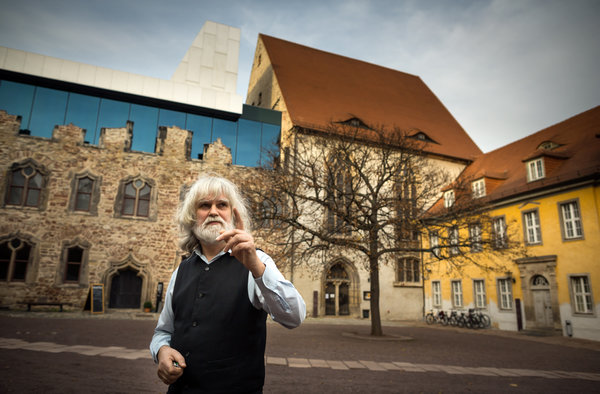 Wolfgang Büche, curator of the Moritzburg Foundation in Halle, Germany, where works were looted by the Nazis.

But his excitement at seeing the work, “Landscape With Horses,” a possible study for a 1911 painting by the German Expressionist Franz Marc, was tempered by one fact he called “irrefutable”: The 1938 law that allowed the Nazis to seize it — and thousands of other Modernist artworks deemed “degenerate” because Hitler viewed them as un-German or Jewish in nature — remains on the books to this day.

The German authorities say they believe that 380 works confiscated from German public museums under the Nazi-era law may be among the more than 1,200 paintings, lithographs and drawings found stashed away in the apartment of Cornelius Gurlitt, the reclusive 80-year-old son of a Nazi-era art dealer.

The law’s existence renders slim the likelihood that Mr. Büche’s museum or dozens of others in Germany can reclaim their works, German legal experts and museum and government officials say. And that law is likely to remain in place.

The Nazis sold thousands of the confiscated works on the open art market to fill wartime coffers. Repeal or reform of the 1938 law could unravel an intricate web of art deals involving such works that have been negotiated around the world in the decades since, something that even many museum curators like Mr. Büche are loath to consider.

Despite the lengths Germany has gone to to repair the moral and material damage done during World War II, for decades the restitution of confiscated art was not a topic of discussion or action here, and no German government has sought to repeal the Nazi law.

“The legal situation is relatively obvious and clear,” said Mr. Büche, who oversees the collection at the Moritzburg Foundation in Halle. “With art taken from Jewish collectors, there are sometimes legal or at least moral circumstances under which they can seek to have their works restituted. We can only seek to buy them back.”

Indeed, those works confiscated from public German museums stand in a separate category from works seized or sold under extreme duress by private Jewish collectors, whose heirs may still have legal claims to the art. Some have initiated new actions to retrieve works found in Mr. Gurlitt’s apartment.

But for museums like Mr. Büche’s, the legal path is far knottier. What is more, legal and museum experts say, if Mr. Gurlitt can prove he legally inherited the works — and the statute of limitations on any wrongdoing may long ago have run out — they could well remain his, unless a deal with the government can be reached.

While the German authorities have come under criticism abroad for their handling of the Gurlitt case — in particular, keeping the discovery of the art trove secret for almost two years — questions have been raised in the German news media about whether they had the right to seize Mr. Gurlitt’s entire collection. While he is under investigation for tax evasion, he has yet to be charged with any crime.

On Tuesday, the state prosecutor in Augsburg, Bavaria, where the case is being handled, said he would urge the task force appointed to clarify the provenance of the collection to tell him as soon as possible which works are irrefutably Mr. Gurlitt’s, so that they can be returned. Mr. Gurlitt has made clear he considers the works his property and wants them back.

Mr. Büche, the curator, would like his pictures back, too. Yet, in his three decades at the Moritzburg museum, he has been able to celebrate the return of just 16 prewar items, a tenth of a collection that once ranked among the most impressive in the country.

Some of the museum’s prewar works now hang in the Museum of Modern Art in New York or at Harvard University after having been traded on the open market like many so-called degenerate works once confiscated by the Nazis.

Only occasionally do those works travel back to Halle on loan. Such special exhibitions are the biggest draw to the museum, which, despite a renovation in 2008, struggles to attract 60,000 to 70,000 visitors a year.

“We always try to buy back our works, when they turn up, but as a state-funded museum, we can’t compete against big bidders,” Mr. Büche said.

With their swirling, sweeping necks and hindquarters, the Expressionist gray-blue horses in the Marc painting that was once displayed here ran afoul of Nazi tastes. It was confiscated as part of the law, passed in May 1938, that sanctioned the removal of more than 5,000 “entartete,” or “degenerate,” works from public museums.

Historians say the Soviet powers sought to have the law nullified in the early 1950s but claimed that the Western Allied powers, for reasons that are unclear, did not support the idea. So Hitler’s rejection of works that did not reflect the Nazis’ sentimental view of art lives on.

Last weekend, the respected conservative daily Frankfurter Allgemeine Zeitung condemned the law’s endurance as part of the “unsurpassed hypocrisy” of German dealings with the art the Nazis plundered.

“It is hard to believe, but this Nazi law has never been overturned by the German government,” said Ulrike Lorenz, director of the Kunsthalle Mannheim, which lost its Modernist collection, some 800 works, to the Nazis.

Ms. Lorenz says she is determined to press the museum’s claims. Together with three other museums that have recognized works from their prewar holdings in the first 25 works from the Gurlitt collection posted at lostart.de, she is examining what legal recourse might be possible.

Such claims could proliferate once the works, probably hundreds, seized from museums and found in the Gurlitt collection are more widely known.

The Kunsthalle Mannheim began early on to collect works by the German Expressionists, including Ernst-Ludwig Kirchner, whose “Melancholy Girl,” a print described by Ms. Lorenz as an important and very personal work, was found in the Gurlitt collection. Ms. Lorenz would like to see it hanging again in Mannheim.

“Of course, we will seek to have the work returned,” Ms. Lorenz said. “Carefully put, I think that the public museums have a certain moral claim to the art that once belonged to them.”

Some art historians point to the precedent set by Bernhard Böhmer, who, like Mr. Gurlitt’s father, Hildebrand, was one of four dealers tapped by the Nazis to sell the so-called degenerate works. After he took his own life in 1945 in the East German town of Güstrow, the Soviets handed over most of his collection to the state, which returned the works to museums or sold them back at a nominal price.

Others warn that nullifying the 1938 law could have far-reaching implications.

“If that law were to be nullified, then all the transactions would have to be annulled,” said Sabine Rudolph, a lawyer who specializes in the restitution of art confiscated from Jews. “If one museum that recognizes a work in the Gurlitt collection insists, ‘I want that back,’ they may suddenly realize they have several works that previously belonged to other museums that they would then have to return.