'They have to come back to me,' Cornelius Gurlitt demands Nazi-era art hoard back 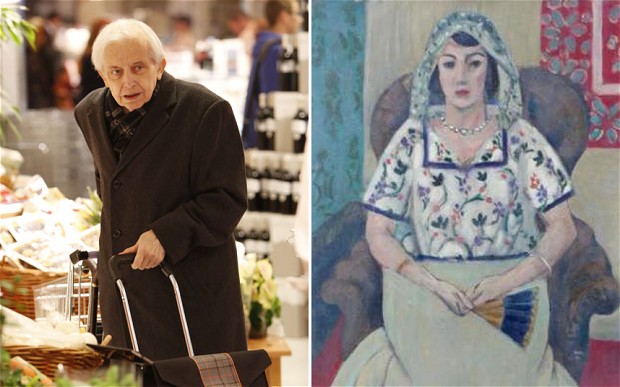 "I want them back," the reclusive 80-year-old accused of hoarding a collection worth £850 million said in his first interview.

Cornelius Gurlitt told Der Spiegel magazine that the paintings, including works by Marc Chagall, Otto Dix, Max Beckmann, Pablo Picasso and Henri Matisse, were his only source of pleasure.

"What do these people want from me? I'm just a very quiet person. All I wanted to do was live with my pictures.

"I won't speak with them, and I won't voluntarily give back anything, no, no," he told the magazine. "When I'm dead, they can do with them what they want."

German officials unearthed and confiscated the secret art collection after Mr Gurlitt underwent a routine customs search on a train to Switzerland in 2010, and was found to be carrying 9,000 euros in cash.

He is suspected of earning an undeclared living by selling selected works from the collection, many of which are believed to have been stolen from Jews or bought by his father Hildebrand Gurlitt at rock bottom prices from Jewish collectors eager to escape Nazi Germany.

He denies any wrongdoing or evasion of taxes or customs and pleaded that he simply sold pictures to pay his medical bills.

"They have it all wrong," he said.

In the interview, the white-haired and frail pensioner described his lonely and reclusive life in a Munich flat. He has not watched television since 1963 and while he has heard of the internet, he has never used it.

For decades, Mr Gurlitt had unpacked his personal selection of drawings, kept in a small suitcase each evening to admire them.

Sometimes he would take an undated painting by Marc Chagall, entitled "Allegorical Scene" from a locked wooden cupboard to gaze at it.

He told his interviewers that he spoke to the paintings. "They were his friends, the loyal companions that didn't exist in his real life. He considered it is his life's mission to protect his father's treasure, and over the decades he lost touch with reality," Der Spiegel reported.

After 40 years of living alone with his paintings, reality finally intruded on Mr Gurlitt's life in February 2012 when German police raided his apartment.

Following a search that lasted four days, the authorities took away 1,406 works of art. Details of the investigation only became public a fortnight ago.

For the last 18 months he has been alone in his bare apartment and the only person who came to see him, before the world's media arrived on his doorstep, Mr Gurlitt claimed, was a woman from Munich's counselling department in the city's social services.

"I've really missed the paintings. What kind of state is this that puts my private property on display? They have to come back to me," he said, choking back tears.

Since the raid he has received a letter informing him that a number of works of art are going to be returned to him but he has not been told which ones. "I have never wanted anything from the state," he said.

The secret art collection comes from the estate of his father, Hildebrand, an art critic, museum director and art dealer who died in 1956.

He was prominent in establishing modern art in Germany and, after 1933, did business with the Nazis, who had banned at least hundreds of the works in the collection as "degenerate" before selling them to him.

After the war, Mr Gurlitt Senior, who died in 1956, told US Army interrogators that his collection was destroyed in the allied firebombing of Dresden.

His son, Cornelius, told Der Spiegel that he helpd his father save the paintings from Dresden in 1945 before it fell to advancing Russians. The city then stayed behind the Iron Curtain until the fall of the Berlin Wall in 1990.

"My father knew the Russians were getting closer and closer. I never had anything to do with acquiring the pictures, only with saving them," he said. "People only see banknotes with this painted paper - unfortunately. I'm not as courageous as my father. He loved art and fought for it."