BERLIN—It is the jewel of the more than 1,400 works in the trove of suspected Nazi loot discovered in Munich: "Woman with a Fan," a 1923 Matisse oil painting that depicts a cream-skinned brunette in a flowered blouse holding a gold and navy fan.

Private Matisse dealers value the work at around $6 million to $8 million, but the dramatic story behind its rescue and its prestigious provenance could push the price to around $20 million at auction, experts say. 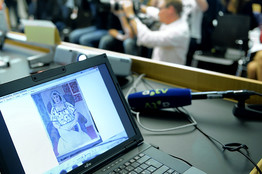 The Matisse was shown at a news conference in Germany on Nov. 5. Agence France-Presse/Getty Images

"It's an excellent Matisse," says Daniel Malingue, a Paris-based dealer.

As German authorities face increasing international pressure to quickly identify the original owners of the artworks and to return them, the Matisse painting could serve as an important test case.

Unlike most of the other works in the trove, there is no question about who owned the Matisse before it ended up in the Munich apartment of Cornelius Gurlitt, the elderly son of an art dealer for the Nazis.

Days after Hitler's troops occupied Paris on June 14, 1940, French gallerist Paul Rosenberg stowed the painting, along with about 160 other works, including masterpieces by Van Gogh, Monet and Picasso, in a bank vault in southwestern France.

Mr. Rosenberg, who was Jewish, then fled with his wife and daughter to the U.S., where he had shipped reams of documents proving his ownership of the works.

The collection, among the most coveted in Europe, remained in the city of Libourne until it was discovered by Nazi art hunters in September 1941. Hildebrand Gurlitt, Cornelius' father, belonged to this cadre of art dealers, who were scouring occupied France in search of masterpieces for Hitler's planned Führermuseum.

Art historians say the documentation relating to the Matisse leaves no doubt that it belonged to Mr. Rosenberg and his heirs have already contacted local authorities in Germany seeking its return after learning through the media this month that it was part of the Gurlitt trove.

Among Mr. Rosenberg's grandchildren is Anne Sinclair, a famous French broadcast journalist and the former wife of the ex-chief of the International Monetary Fund, Dominique Strauss-Kahn.

Ms. Sinclair is involved in the family's restitution discussions with German authorities. The family declined through a lawyer to comment on the case.

The Matisse painting has long been registered as missing on lostart.de, the German government's official database for art looted during World War II—and which the sole art expert researching the Gurlitt collection had been using for months.

Mr. Rosenberg bought "Woman with a Fan" sometime between 1925 and 1928—years before becoming Matisse's dealer in 1936.

The work is listed as item 1721 in the Rosenberg gallery ledger, a detailed list of works purchased by Mr. Rosenberg as stock for his gallery and pieces for his private collection. The entry includes a photo card showing the painting and was noted as a piece for Mr. Rosenberg's private collection, according to the family's representative, lawyer Christopher Marinello.

After it was looted from the vault, German officials moved it to the Jeu de Paume in Paris, according to Allied documents held by the Rosenberg family cited by Mr. Marinello. The painting was then transferred in 1944 to Baden Baden. It is unclear when the work ended up in the Gurlitt collection.

Mr. Rosenberg filed at least two claims for the work to French authorities in 1946 and 1947, according to Rosenberg family documents, and for decades continued to search for it in auction house catalogs.

The Rosenberg family declined to say what they would do with the painting if recovered. But their experience highlights the questions still being raised about the German government's handling of restitution claims for Nazi-looted art—including a lack of coordination between government organizations.

The U.S. State Department and Holocaust victims groups have played a big role in pushing the German government to disclose details of the latest cache.

"All of the works need to be published as soon as possible," said Stuart Eizenstat, U.S. Secretary of State John Kerry's special adviser on Holocaust issues, in an interview.

Following a meeting with U.S. Embassy officials in Berlin last week, the German government on Monday published a list of 25 works in Mr. Gurlitt's collection—including "Woman with a Fan." Days later they vowed to publish a list of the 590 works they believe were looted by the Nazis soon.

German officials say they are eager to expedite the process.

Previously, the German government argued that because Bavarian officials took the works as part of a tax investigation, no details needed to be released and the dispute was a local one.

On Friday, Bavarian Justice Minister Winfried Bausback criticized the lack of coordination between government organizations and called for the full list of works to be published, within the parameters of German law.

"We need to get all the parties involved here at one table," he told the Journal, adding he only learned about the Gurlitt collection from the media.

Mr. Bausback says he hopes to reach a settlement with Mr. Gurlitt to avoid a protracted legal fight and expedite restitution. He said he would meet with U.S. officials on Tuesday to discuss how he can facilitate this.

Mr. Gurlitt could not be reached for comment. Prosecutors say he doesn't have a lawyer.