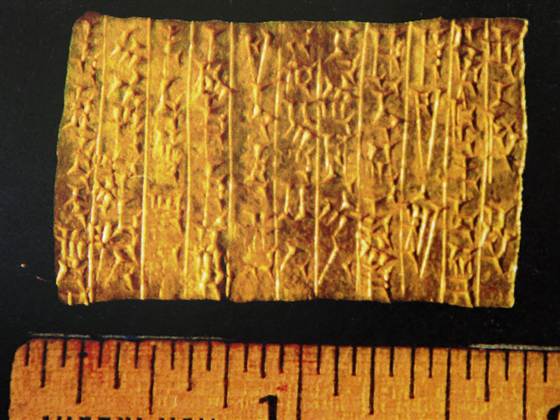 3,200-year-old gold tablet that's smaller than a credit card is at the center of a court case between a Holocaust survivor’s family and a Berlin museum.

ALBANY, N.Y. — In a ruling rejecting any claims to the "spoils of war," New York's highest court concluded Thursday that an ancient gold tablet must be returned to the German museum that lost it in World War II.

The Court of Appeals unanimously agreed that Riven Flamenbaum's estate is not entitled to the 3,000-year-old Assyrian relic, a 9.5-gram (0.34-ounce) tablet smaller than a credit card.

"We decline to adopt any doctrine that would establish good title based upon the looting and removal of cultural objects during wartime by a conquering military force," the court said in a memorandum. "The 'spoils of war' theory proffered by the estate — that the Russian government, when it invaded Germany, gained title to the museum's property as a spoil of war, and then transferred that title to the decedent — is rejected."

The tablet, inscribed with an exhortation to honor King Tukulti-Ninurta I, was excavated a century ago by German archaeologists from the Ishtar Temple in what's now northern Iraq. It went on display in 1934 and disappeared after the start of the war.

Flamenbaum, an Auschwitz survivor, brought the tablet to the United States when he settled in New York. Family lore says he got it by trading cigarettes to a Russian soldier.

The New York court also rejected the argument the Vorderasiatisches Museum, part of the renowned Pergamon Museum, waited too long — more than 60 years — before trying to reclaim it. A judge on Long Island said it had unreasonably delayed, but a midlevel court last year ruled the other way.

"New York has really affirmed its moral leadership in protecting true property owners," said museum attorney Raymond Dowd. "This decision makes it clear that the rule of finders keepers is not the law in New York."

The ruling should ensure the safe return of the tablet, Dowd said. The museum has many other pieces still missing since the war, he said, adding that some Holocaust groups filed a court brief supporting the museum's claim.

Attorney Steven Schlesinger said the family was disappointed and questioned whether the court refused to uphold "title by right of conquest" because it would open the door for those who obtained art looted by Germans during the Holocaust.

"You can't argue that the United States doesn't recognize the right of conquest when this entire country is the result of the law of conquest," he said, citing territorial expansion that includes Texas and California and at least 50 Indian land claims in New York.

The Court of Appeals said there was no proof that Russia ever possessed the tablet, and that it was the official U.S. policy during World War II to forbid pillaging of cultural artifacts.

According to court documents, the tablet dates to 1243 to 1207 B.C., during Tukulti-Ninurta's reign. Placed in the foundation of the temple of the fertility goddess, its 21 lines call on those who find the temple to honor the king's name.

In 1945, the Berlin museum's premises was overrun, with many items taken by Russians, others by German troops and some pilfered by people who took shelter in the museum. The museum director was not in a position to say who took it, only that it disappeared.

It has been in a deposit box in New York.